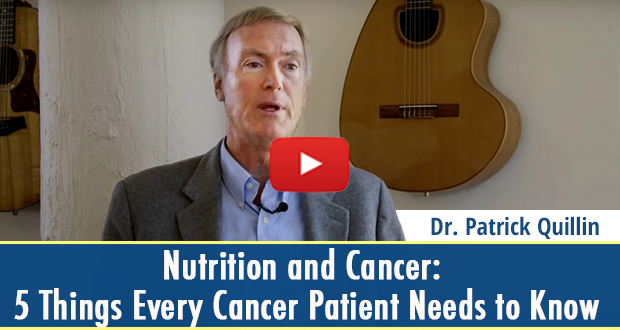 Dr. Patrick Quillin: A broad expansive sort of global question here Ty. So forgive me if we take a couple of side spurs. My book, Beating Cancer with Nutrition, which has sold a half million copies and is considered the definitive work in that area. It’s been translated into five languages. I organized three international symposia on the subject of adjuvant or healthful nutrition in cancer treatment. And then the textbook came out of that, Adjuvant Nutrition in Cancer Treatment. So all of this is not just hearsay in any window.

Essentially there’s five main reasons why all cancer patients need to use nutrition as part of their comprehensive cancer treatment. And a forewarning, I would not use nutrition as sole therapy against cancer. It’s insufficient, but it is irreplaceable.

And so given that, let’s just think of the five main reasons why every cancer patient needs to include nutrition as part of their comprehensive therapy.

Number one, nutrition actually is a big part of the malnutrition. Forty percent of cancer patients die of malnutrition, not of the cancer. Cancer is a wasting disease. Appetite is affected. You end up in the hospital with food that you’re unfamiliar with. Chemo and radiation can induce cachexia or lean tissue loss. So malnutrition kills 40 percent of cancer patients. The only therapy for that is proper nutrition. It sometimes needs to be aggressive with the metabolic support team such as total parenteral [taken in a form other than through the digestive tract] nutrition and other things.

Number two is that nutrition can help to make chemo, radiation, and surgery more of a selective therapy. In other words, chemo and radiation are non-selective toxins. They’re cytotoxic poisons. They kill everything in their pathway. And there is what they call “collateral damage.” So a patient who is receiving chemo is going to have a certain amount of hair loss, nausea, vomiting, weight loss, all as part of the chemo. But nutrition can make chemo, radiation, and surgery more selectively toxic to the tumor and less toxic to the patient.

This is where a very important part of my message is to get the oncologist and the nutritionist and the cancer patient in the same room together and they all have the goal of beating this cancer. And the fact is a well nourished cancer patient can better manage the disease and the therapies that are used for it. So number two is nutrition makes chemo more of a rifle rather than a hand grenade.

Number three, we find that cancer is a sugar feeder. Cancer is what’s called an obligate glucose metabolizer. Meaning that there’s a dramatic uptake of glucose in the cells of tumor cells. If you can lower gut and blood glucose you can help to slow down cancer. There’s a number of therapies now that target this whole unique Achilles heel of the cancer cells.

And number five is that nutrients can become biological response modifiers.

Back in 1971 when Richard Nixon launched the war on cancer he said, “we will have the cure for a major cancer within five years by the bicentennial, 1976.” We don’t. We don’t have a cure for any major cancer today either. 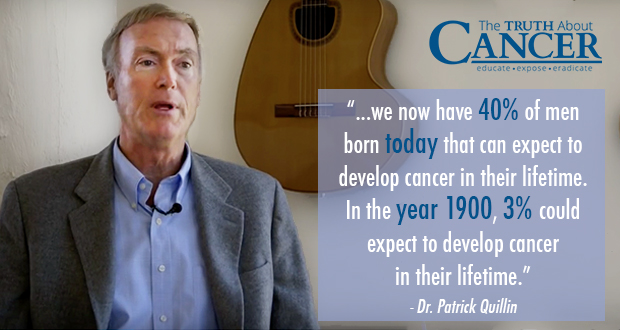 We have some better treatments, but essentially what launching the war on cancer… and we have now spent in the neighborhood of 50 billion dollars on research at the National Cancer Institute, and over a trillion dollars in therapies… we now have 40% of men born today can expect to develop cancer in their lifetime. In the year 1900, 3% could expect to develop cancer in their lifetime. We got a problem there.

But one of the things we know from cancer research and nutrition research is that nutrients can become biological response modifiers. They change the way the body works.