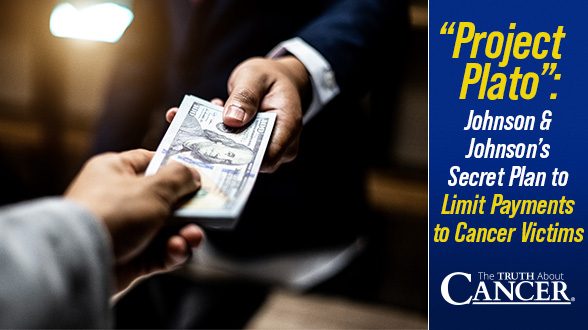 The latest in a slew of evil missteps by pharmaceutical giant Johnson & Johnson came to light this week, furthering the list of ways in which the company has put profit over patients.

According to Reuters, Johnson & Johnson created a plan last year to limit the financial bleeding from billions of dollars in jury awards to plaintiffs who alleged the company’s Baby Powder and other talc products caused deadly cancers. The healthcare and consumer-goods giant assigned more than 30 staffers to “Project Plato.” In a memo on the project in July, a company lawyer warned the team: Tell no one, not even your spouse.

“It is critical that any activities related to Project Plato, including the mere fact the project exists, be kept in strict confidence,” Chris Andrew, a J&J lawyer, wrote in an internal memo reviewed by Reuters.

The covert team would go on to evaluate a strategy to shift all the liability from about 38,000 pending talc cases onto a newly created subsidiary, which would immediately declare bankruptcy. The goal, as a lawyer for the subsidiary said in a court filing: To halt all the litigation and transfer the cases to bankruptcy court, where plaintiffs would compete for compensation from a limited pool of money.

The documents provide the most detailed account to date of how the New Jersey-based conglomerate strategized to limit compensation to tens of thousands of talc plaintiffs.

Reuters exclusively reported the broad outlines of the bankruptcy strategy being explored by J&J in July. The company went ahead with the plan in October, offloading responsibility for the cases to the new subsidiary, which then filed for bankruptcy. Before the filing, the company faced costs from $3.5 billion in verdicts and settlements, including one in which 22 women were awarded a judgment of more than $2 billion, according to bankruptcy-court records.

But the story gets even worse.

Before the Reuters article was published, Johnson & Johnson tried to get a U.S. judge to block Reuters from publishing a story based on what it said were confidential company documents about the healthcare giant’s legal maneuvers to fight lawsuits claiming its Baby Powder caused cancer.

“The First Amendment is not a license to knowingly violate the law,” said the company in a filing late Thursday in U.S. Bankruptcy Court in New Jersey, where a unit of J&J had sought bankruptcy protection while defending the Baby Powder lawsuits. The First Amendment of the U.S. Constitution protects freedom of the press.

After the publication of the story, Reuters asked U.S. Bankruptcy Judge Michael Kaplan to deny J&J’s motion, claiming it was moot. Less than an hour after Reuters submitted its letter, J&J said in a filing that it was withdrawing a request for an immediate hearing on the matter but was “not prepared to agree” that its request regarding the documents was, in actuality, moot.

J&J said in its filing after the publication of the story that it intends to continue discussions with Reuters and said it was “heartened that publication of confidential documents may no longer be imminent.”

J&J’s request to block publication was “among the most extraordinary remedies a litigant can request under the law,” attorneys for Reuters, a unit of Thomson Reuters, said in a Friday court filing. The news agency’s lawyers called J&J’s request a “prior restraint of speech on a matter of public interest.”

J&J said Reuters had obtained documents that were protected from public disclosure by an order from Kaplan. The company demanded that Reuters return the documents and refrain from publishing information gleaned from the documents.

For those of you unfamiliar with the tens of thousands of cases regarding Johnson & Johnson’s talc products, here’s a quick recap:

J&J has been sued countless times over claims that their baby powder causes cancer, but plaintiffs were often unable to obtain the internal records they needed to prove the company’s guilt. Several of these cases have gone to trial, including a case last summer in which 22 women, who blamed asbestos in the baby powder for causing ovarian cancer, were awarded $4.7 billion by a St. Louis jury.

You see, Johnson & Johnson has been able to keep their internal documents private for years, labeling them “confidential.” This new report sheds light on information that has not been made available to the public before – including internal documents, research results, and trial testimony – which tells a chilling tale. According to Reuters:

“[The information] shows that from at least 1971 to the early 2000s, the company’s raw talc and finished powders sometimes tested positive for small amounts of asbestos, and that company executives, mine managers, scientists, doctors and lawyers fretted over the problem and how to address it while failing to disclose it to regulators or the public.”

It goes on to say that the documents “also depict successful efforts to influence U.S. regulators’ plans to limit asbestos in cosmetic talc products and scientific research on the health effects of talc.” Reports from as far back as 1957 describe talc contaminated with fibrous tremolite, a recognized type of asbestos.

You can read these previously unreleased documents for yourself here.

But this isn’t the first time Johnson & Johnson has betrayed their customer, and it likely won’t be the last. Here are a few other major J&J lawsuits and recalls for faulty products over the past few years:

The problem is systemic. Johnson & Johnson has repeatedly broken the rules, injuring or killing their customers with almost no real consequences. And yet, we’re supposed to trust this company with Emergency Use Authorization for vaccines that will soon be available to children as young as 6 months old.

If you think Johnson & Johnson is the outlier, you’re mistaken. Pfizer, Moderna, GlaxoSmithKline, Teva, Eli Lilly, and Sanofi are just a few of the major pharmaceutical companies with sordid histories of misconduct.

←
Previous
Chaga Mushrooms: A Powerhouse of Healing
→
Next
Why Love is the Greatest Gift