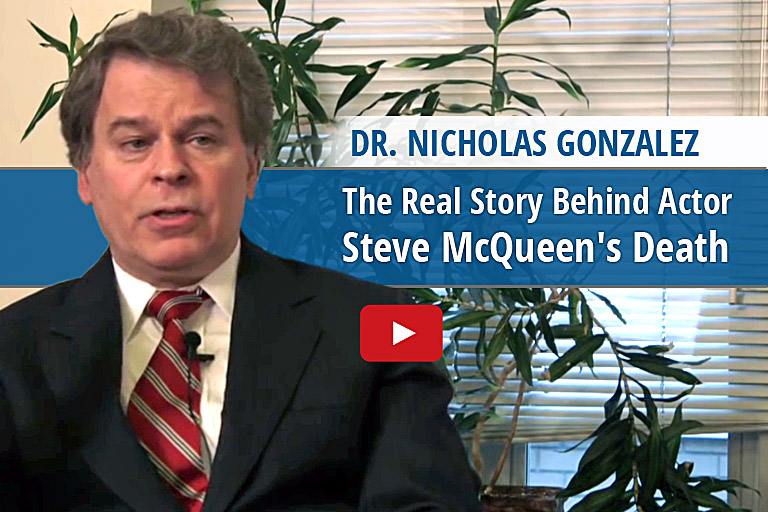 Dr. Nicholas Gonzalez: The Steve McQueen story has never been properly told. That’s another big thing. There are all kinds of biographies about Steve McQueen and they mention Dr. Kelley – the “crazy guy.” I’ve talked to some of these authors. They never really investigated it properly. I know the whole story. In fact, in this office, about 25 feet from where we are sitting, I have Steve McQueen’s complete medical records, even when he used assumed names. I got them from [Dr. William Donald] Kelley. I know the whole story. I know it like nobody else has because no one else has ever had his complete medical file.

McQueen was kind of a reckless guy. Motorcycle racer, smoker, drinker and lived a hard life as he is famous for. He started getting sick in 1978-1979 and went to his fancy Los Angeles doctors and they kind of blew it off. You live too hard… you’ve got to cut down the smoking. No one took him seriously. Finally, he was so debilitated he went to his doctors and says “You’ve got to do something.” Finally the genius said, “Hey, let’s do a chest x-ray.”

In those days, 35 years ago and today, mesothelioma is completely incurable once it spreads. The only hope is to get it early and do surgery. Well, his “brilliant” doctors had completely missed the diagnosis for a year. So by the time it was diagnosed, it was metastatic.

Kelley made one fatal mistake in treating Steve McQueen. He took him on as a patient. He was too advanced and he was a reckless guy. He was still smoking, still drinking, but he pleaded and Kelley was a very compassionate guy. He said, “I will treat you but you are too weak. You can’t do this at home the way most of my patients do.”

There was a hospital in Mexico at the time that was administering parts of Kelley’s therapy. He says “Go down to that hospital in Mexico and I’ll kind of direct them.” And he did. McQueen wasn’t 100 percent compliant. He still had the Haagen Dazs ice cream smuggled in from his friends and cigarettes, but he did enough of it so he started getting better and then one of the doctors in Mexico gets the “brilliant” idea… “Let’s open him up,” because they think that the tumor. (He had a tumor in his abdomen as well as in his chest.) “Let’s take it out… we think it’s a dead tumor.”

They do the surgery and the next day he dies of a pulmonary embolism, which is a blood clot in the lungs. He did not die of mesothelioma and, in fact, the tumor was a dead tumor. Kelley used to have it in his office in formaldehyde – a dead tumor that had shrunk down from a huge tumor down to nothing. It was dead. He didn’t die the way the media reports read, which I have. It’s like Kelley took a gun and shot McQueen… his “crazy quack doctor.” The true story has never been told.