Ty Bollinger: You talked about unraveling the mysteries here. So let’s look at the immune system. Is the immune system one of those mysteries that we need to explain and help to unravel, so that people can better get a grasp on how they can control the factors that might affect that immune system and then down the road, potentially, cause cancer?

AJ Lanigan: Well, as I am fond of saying, your immune system is really the only thing that stands between you and all those things in you, on you, and around you, trying to get you all the time – cancer included.

Now, the problem with cancer, in particular, it’s not like well, I got a cut and I got dirt in it or I got a splinter. Or, you know, I just drank some bad milk and you know, it has got bugs in it or I ate at a salad bar and whoever prepared it did not wash their hands after the toilet so I got some kind of E. coli.

It’s tough for the immune system to find it, to see it, to recognize it. In fact, there are only a minute number of immune cells that even have the capability of surveilling and actually recognizing precancerous or cancerous cells.

The largest number of immune cells in your body are known as neutrophils. When you go get your blood work, just standard old blood work, NEU is the abbreviation for neutrophil. On any given day, they’ll count anywhere from 50% to 70% of your total immune army, which basically, is your white blood cells.

There may be virus hiding inside that cell. That cell could be mutating. It could be mutating and be benign, could be mutating and turning cancerous. It doesn’t matter – no smiley face. But see, the natural killer cells are, again, a very, very minute population. Now they may ramp up in numbers. Say, when you get a flu bug. But it takes a couple of weeks for that to happen, you see? So ultimately, if your immune system is hitting on all eight, in a perfect world, I’m talking a 24-karat gold athlete… 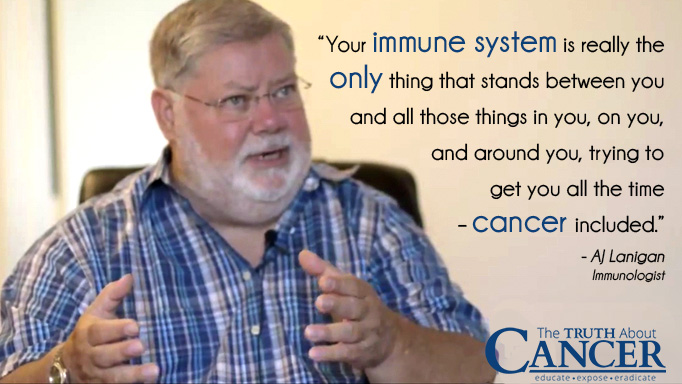 Ty Bollinger: And on gasoline with no ethanol.

AJ Lanigan: …every card in the deck lined up, you’re only going to have about 30% of your immune cells come to your aid in the face of a challenge – 30%. The rest of them, they’re just sitting up in the stands watching the game and eating popcorn. Thirty percent.

Now we’re not talking about a handful of cells. Me, you, most everybody else listening, there is some debate. We may have 100, 110, 120 trillion cells in our body. A little debate over that. I have never counted them but there are a lot of people have…

Ty Bollinger: It would take a while.

Why is that? Well, again, it is responsible for protecting every other cell in the body. So you’re going to have numbers. Those natural killers – 30% give or take – but that is 30% of trillions. But the neutrophils, 50% to 70% of 10 to 12 trillion.

A question I ask myself, what if they could see cancer? What if you could take the major load and ramp up and say, “Oh, there’s a cancer cell over there.” Bam, it’s gone. Instead of relying on those lower numbers. You have got some cytotoxic T lymphocytes. I’ve talked about them being the ninja cells. They can see cancer, too, but again, they’re few and far between.

I like numbers. I like numbers. Even in a fair fight, I want to have more numbers, okay? And that is really the heart of where we are, in my opinion, need to be in fighting cancer or any other disease having to do with infections and so forth. And we can do that. We can do that. We have got materials that we can put into our body that will not only help the immune system be healthy, but also make those numbers that are up in the stands be down on the field fighting the fight.