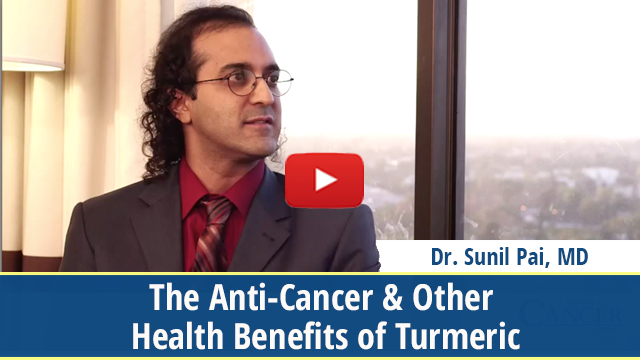 Video Transcript: Anti-Cancer & Other Health Benefits of Turmeric and Curcumin

Dr. Sunil Pai: So, we look at a variety of things and one of the main ingredients or natural therapies that has been very effective. And now that we have a preponderance of data in terms of clinical efficacy, in terms of cell culture, animal studies, and now in human clinical trials is many of the ingredients I spoke about today such as curcumin.

Curcumin is an ingredient that comes from turmeric. Turmeric is a root. We use it in cooking. So we think of curry. It’s a spice, but it’s not spicy. A lot of people have a misperception that, “oh, it’s spicy.” It’s a spice, but it’s not spicy. It doesn’t have the heat component like a chili, for example. We use it in yellow curry if you went to a Thai restaurant, or when people have mustard, what makes it yellow is turmeric powder.

Unfortunately in American cooking it’s used as a colorant because it does have that yellow color. It’s a natural colorant, but it has a variety of other benefits. And one of the benefits is that it’s a strong anti-inflammatory. It now has been shown to block over 97 different mechanisms of inflammation. Eating it as a food or even taking it as a supplement has a variety of benefits.

We can see a lot of data showing the supporting use of why we have used this historically in our past, and also what we use now in clinical trials as a supplement. Many companies now are looking at how to do it pharmaceutically as well.

Ty Bollinger: You talked about [that it] reduces inflammation; inflammation linked to cancer.

Ty Bollinger: So any anti-cancer effects from…?

Dr. Sunil Pai: Most of the data right now—there’s 5,000 published studies on the benefits of curcuminoids. In the last ten years there’s a lot of data now on how that affects cancer cell growth. Through these mechanisms of inflammation like NF-kappa B, which I talked about today, one of the major switches of the immune system. COX enzymes, LOX enzymes. These are things that we take certain drugs [for] like say ibuprofen, Motrin, Advil, Celebrex. But the nice thing with the curcumin is that we have no GI, kidney, or liver side effects. So we can take this in higher doses or lower doses. 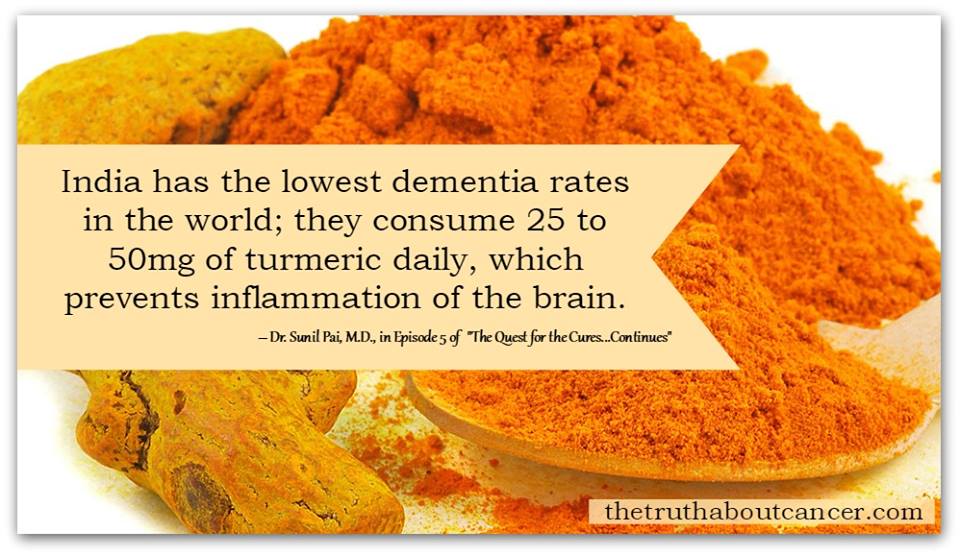 I didn’t mention it today, that India, for example, has the lowest dementia rates in the world. One of the issues that we’re looking at. Well, why as a culture? It’s not that they’re smarter people. It’s that we’re finding out that they consume about 25–50 milligrams of turmeric daily over their lifetime. And that prevents inflammation of the brain.

Sunil Pai, MD is Board Certified in Holistic Integrative Medicine. After his residency in Family Medicine at the University of New Mexico, he became a Fellow of the Program in Integrative Medicine at University of Arizona directed by Dr. Andrew Weil. He is certified by Dr. Deepak Chopra as a Primordial Sound Meditation Instructor and a Creating Health (Ayurveda Lifestyle) Instructor. He is also certified in Functional Medicine, Physiological Regulating Medicine, Medical Acupuncture and Neuro-Acupuncture through Stanford University School of Medicine and Dr. Jisun Hao. Dr. Pai also specializes in Auriculotherapy focusing on treatment of both food and inhalant allergies using sublingual immunotherapy or SAAT. Additionally, Dr. Pai is certified in Plant-Based Nutrition from Cornell University and the T. Colin Campbell Foundation. Dr. Pai has undergone specialized training in Ayurvedic Medicine at the Sri Dharmasthala Manjunatheshwara College of Ayurveda, and Intensive Yoga Therapies at the Vivekananda Yoga Anusandhana Samsthana in India.