You are here: Home / Cancer Prevention / Why the USA is NOT the Best Place if You Have Chronic Disease (video) 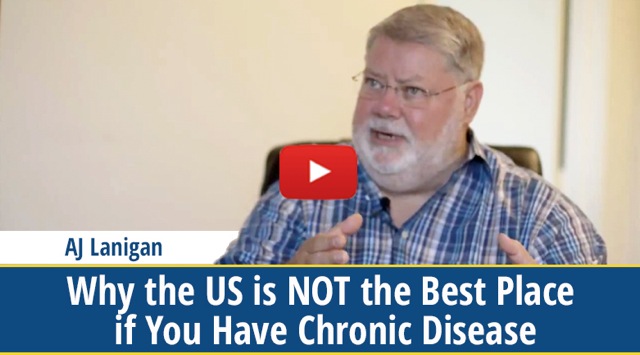 Video Transcript: Why the USA is NOT the Best Place if You Have Chronic Disease

Ty Bollinger: One of the things you said is that in the United States, you mentioned if you had a bone sticking out of your leg, you want to go to the emergency room. And I am with you. If I have an arm amputated… I am a firm believer in natural solutions and natural treatments for disease. But if I got an arm amputated, I’m not going to take some aloe vera gel and rub it on that wound. I’m going to go to the emergency room as quickly as possible; so I’m with you. But you said that if you have a chronic disease, that the U.S. is not the place to be. Could you kind of expand on that? Why is the U.S. not the place to be in that situation?

AJ Lanigan (Immunologist): Well, I think it is a combination of ourselves wanting that immediate fix. We want a pill or a potion to fix something right now. We don’t want to be uncomfortable; we don’t want to be inconvenienced.

A child growing up gets an ear infection. There’s nothing rare about ear infections. Ear infections have been here since time immemorial. But that parent, rather than just take some time off and taking the days necessary for the kid to work his way through… is on the phone with a doctor’s office getting some of that pink bubblegum antibiotic, calling in a prescription, so that they don’t miss work the next day.

It’s not that I’m judging. I’m just saying kids were not born with antibiotic deficiencies; but they are certainly treated that way. Well, you know, here goes the long line… end up killing the good gut flora by the time they start to school. And that begets and that begets.

Is there any wonder why cancer is “incurable?” Is it any reason to debate why cancer is really out of control? When I was a kid, they’d talk about cancer affecting maybe one out of six. Now the numbers are more like one out of two men, and one out of three women − if they live long enough.

I don’t know that that is where the money necessarily needs to be spent. Of course, I’m not the smartest guy in the world. You know, I don’t make hundreds of billions of dollars like the companies make in potions and pills, so who am I?