You are here: Home / Cancer Causes / What Really Causes Cancer 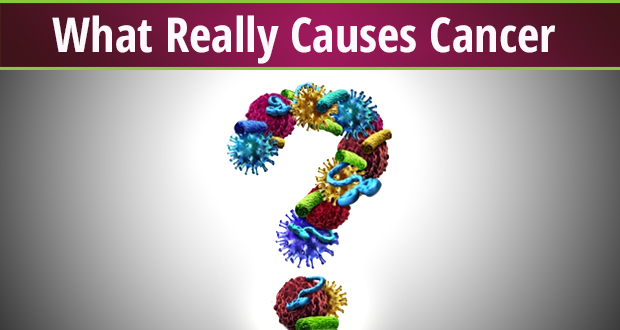 Most people think that DNA damage is what causes a cell to be cancerous.

While it is true that cancer cells may have DNA damage, it is highly unlikely that DNA damage can cause any cell to become cancerous. In fact, the DNA damage is a result of the true cause cancer.

So let us discuss what really causes cancer.

There have been many discoveries about cancer in the past 125 years.

For example, William Russell (1852-1940), in 1890, discovered that there are microbes inside and outside of cancer cells.

Later it was discovered that the microbes inside cancer cells were “pleomorphic,” that is, they changed shapes and sizes depending on the pH inside the cancer cells.

In 1931, the Nobel Prize in Medicine was awarded to Otto Warburg for his discovery in determining that the defining characteristic of cancer cells was low “ATP energy” (ATP is made inside the mitochondria of cells and is called “adenosine triphosphate”).

In 1930, it was proven that if the microbes inside the cancer cells are killed, the cancer cells will REVERT into normal cells. This discovery was made by Dr. Royal Rife, a microbiologist who developed the use of “harmonic frequencies” to vibrate the microbes until they “exploded” and died.

Rather than winning a Nobel Prize for his discovery, Dr. Rife’s lab and inventory were destroyed by the combined consensus of the Food and Drug Administration (FDA) and the American Medical Association (AMA).

So why was Dr. Rife shut down? It was because his discoveries led to a 100% cure rate amongst his cancer patients. See www.rifevideos.com.

This might seem strange to most readers. Why would a cancer researcher be shut down for curing cancer?

It is assumed that conventional medicine and the pharmaceutical industry are diligently looking for the cures for cancer. Nothing could be further from the truth.

What they are looking for are massive, massive profits selling their patented chemicals (i.e. drugs). Curing cancer is not on their agenda since that would cut into their profits.

The media is also part of this conspiracy. Medical doctors are intentionally glorified on television shows and advertisements manipulating the unwell to head for the doctor’s office. The modus operandi of the media can be summarized by a person who was an expert in understanding propaganda techniques, namely Stalin.

“No one understood better than Stalin that the true object of propaganda is neither to convince nor even to persuade, but to produce a uniform pattern of public utterance in which the first trace of unorthodox thought immediately reveals itself as a jarring dissonance.” ~ Alan Bullock, in Hitler and Stalin: Parallel Lives

When a person is diagnosed with cancer, they cannot run fast enough to their nearest oncologist. The media has done their job well.

So, even though researchers seeking natural cures for cancer today know much more about the disease than in the 1930s, very few patients start their treatment with natural medicine.

The scientists at the Independent Cancer Research Foundation (ICRF) − a non-profit foundation investigating natural medicine − are the ones who discovered how the microbes inside cancer cells were partially blocking the ATP energy, as discussed below. With this knowledge, they developed more than 25 natural cancer treatments targeting and killing the microbes inside cancer cells (as Dr. Royal Rife did), thus reverting them into normal cells. 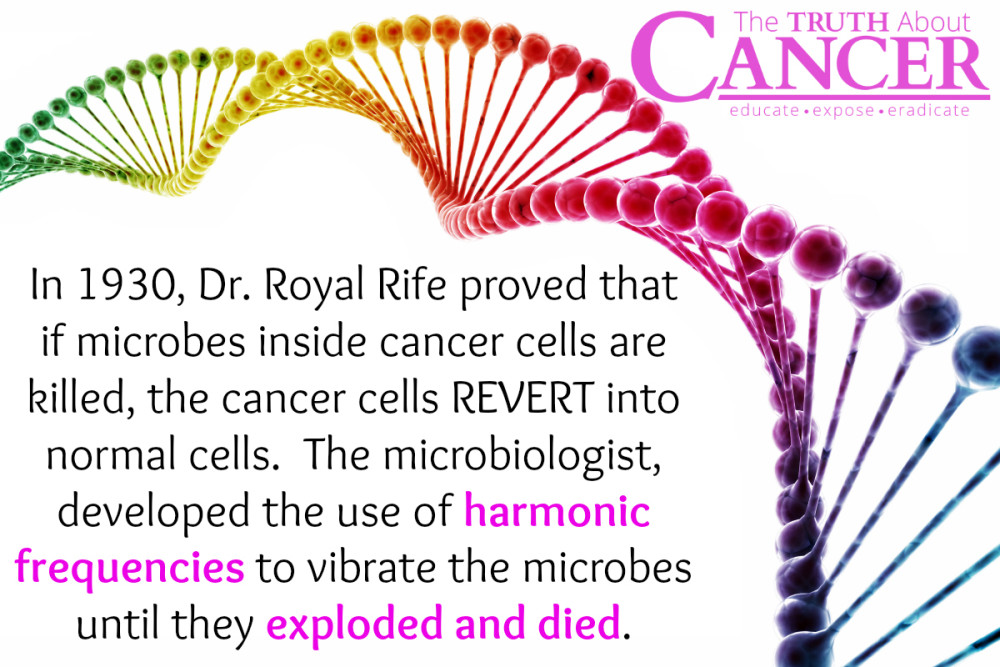 How Microbes Inside Cancer Cells Cause Cancer

So, let’s talk about how microbes inside the cancer cells partially block the production of ATP energy. This is the key to understanding many new cancer treatments.

First of all, let us look at what causes the ATP energy to be created in a healthy cell.

Step 1: In a normal cell, glucose receptors allow glucose inside the cell.

Step 2: In a 10-step chemical chain reaction this glucose is converted into pyruvate.

Step 3: The pyruvate enters into the cell’s mitochondria (every cell has thousands of mitochondria).

Step 4: The pyruvate is at the beginning of a chain reaction called the “Citric Acid Cycle” or “Krebs Cycle.”

These two cycles create most of the ATP energy in the cells.

Does DNA Damage Cause Cancer?

So let us talk about why cancer cells may have DNA damage. The Virginia Livingston team of natural medicine cancer researchers discovered that one or more of the microbes inside the cancer cell penetrate  the cell nucleus (where the DNA is located).

Cancer researchers, such as the American Cancer Society, are trying to fix the DNA damage. This is a total waste of time! But it convinces the general public that they are “looking for” a cure for cancer, when in fact they have no intention of “curing” cancer. Had they hired one of the ICRF cancer researchers they could have 25 cures for cancer in one week!

Many of the conventional cancer “research” organizations do a good job of pretending to look for cures for cancer, but in fact they have no interest in curing cancer at all.

This is the key: by killing the microbes inside the cancer cells, Dr. Rife was able to prevent the microbes from blocking the ATP energy. Once the microbes were dead, the cancerous cells were able to access their ATP energy and “reverted” into normal cells again!

The ICRF researcher who discovered how microbes block the ATP energy also developed about 25 different ways to kill these microbes while they are inside the cancer cells (the microbe is actually a bacteria – Helicobacter Pylori) thereby reverting the cancer cells into normal cells.

Here is one example of how the bacteria inside the cancer cell are killed. Let us consider the “honey and turmeric” protocol, which is part of the Dirt Cheap Protocol (that is its real name because so many cancer patients cannot afford some of the natural cancer treatments) on the Cancer Tutor website.

Cancer cells have more glucose receptors than normal cells and thus are attracted to honey. To some degree, honey can kill the microbes inside the cancer cells, but it is far more effective to mix the honey with turmeric (or some other herb which kills microbes) to eradicate these microbes. Therefore honey becomes a “Trojan Horse” to get the turmeric inside.

Three different studies show that turmeric is the most effective herb at eliminating Helicobacter Pylori and the cells are reverted into normal cells.

The Dirt Cheap Protocol includes over a dozen other techniques that are synergistic with honey and turmeric because they are also designed to target and kill the microbes inside the cancer cells. The Dirt Cheap Protocol can be found on the Cancer Tutor website (www.cancertutor.com) along with several other natural cancer treatments.

In addition, the Royal Rife technology, which also reverts cancer cells into normal cells, has been replicated and improved upon.  On the Cancer Tutor website, the “High RF Frequency Protocol” is automated and performs everything the original Rife frequency generators did and much more.

In conclusion, natural medicine researchers use traditional methods (e.g. carrot juice with a little beet juice mixed in) as well as state-of-the-art technologies as a cure for cancer.