You are here: Home / Cancer Causes / The Truth about Food Dye and Cancer 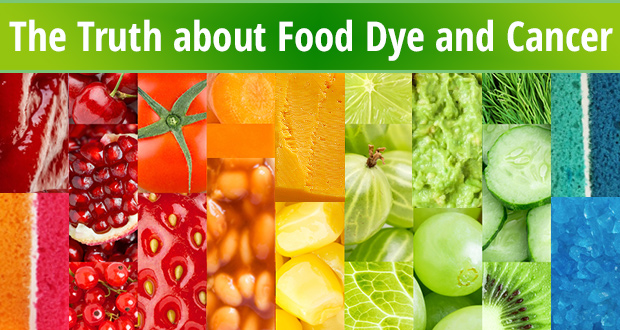 Nutritionists and dieticians encourage us to consume a diet based on a rainbow of foods. Green leafy vegetables, yellow peppers and squash, orange carrots, red apples, purple cabbage, and so on.

Each of the colors represents a different nutrient or compound that work with your body to keep it healthy. These colors make the food visually appealing. Since we eat with our eyes before anything goes into our mouths, we strive to keep our food attractive.

In the age of processed foods, however, food coloring is added to create that fresh, attractive look. Bright red strawberry fillings in cereal bars and multi-hued candy coated shells dazzle our eyes and make our stomachs rumble in anticipation.

Why Food Dye is Used

When food is mass-produced and artificially created, nutrients and natural colors are lost. In order to keep them appetizing, manufacturers add in artificial food dye, preservatives, and agents to inhibit spoilage. The natural beauty and nutrition of foods is replaced with fake compounds in the name of making it pretty and marketable. Manufacturers hush up the very real links found between synthetic food dye and cancer, organ failure, and neurological dysfunction.

In the United States, it continues to be big business and new artificial foods are being created every day to meet demand.

The European Union decided to put a halt to potentially dangerous additives in 2010. In Britain, manufacturers were requested to replace artificial food colors and flavors with natural alternatives. At the very least, any foods containing artificial food dyes now have to carry a warning label.

The U.S. currently has no plans to ban food dye or alter any of the regulations concerning these additives. This is in spite of research that shows the danger food dyes pose to consumers, particularly children (which also happen to be the primary demographic for most brightly colored foods).

Food Dye Colors to Watch Out For

Some of the most dangerous color additives currently in use are:

Blue #2 (Indigo Carmine) – colorant in candies, pet food, and other items. Shown to cause brain tumors in rats.

Green #3 (Fast Green) – found in many cosmetics, candy, and drugs. Increases tumors of the bladder and testes in male rats.

Yellow #6 (Sunset Yellow) – Used in beverages, desserts, gelatin, candy, and even sausage. Found to cause adrenal tumors and trigger severe hyperactivity in children.

Unfortunately, these food dyes are so commonly used, particularly in food aimed at children, that parents don’t even consider the dangers.  Rainbow cereals, blue energy drinks, electric-orange cheese flavored snacks are commonplace on supermarket shelves and usually inexpensive as well. 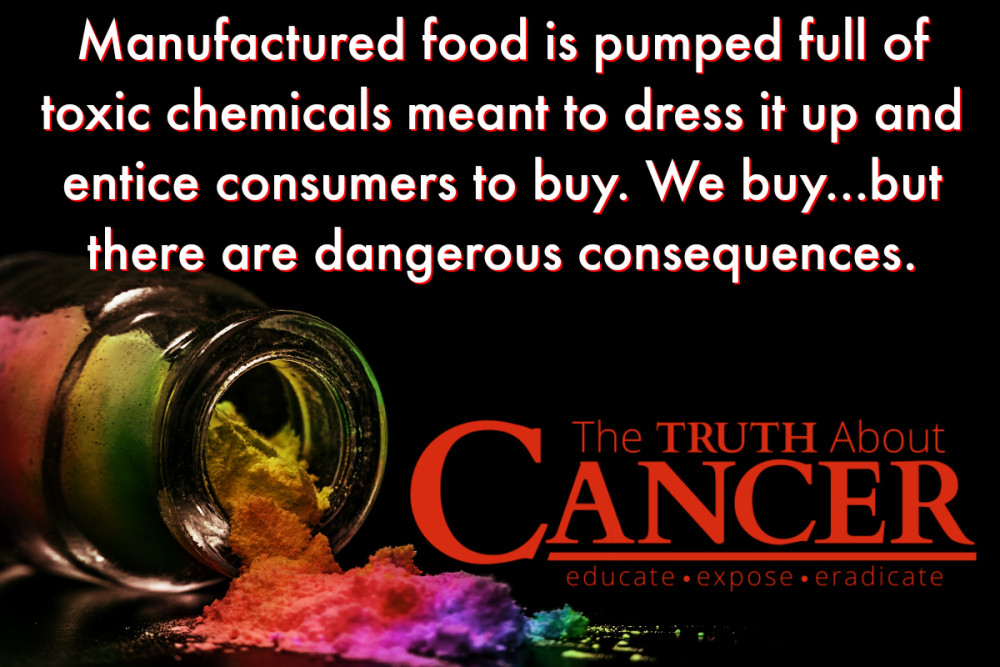 Children are the Main Victims of Food Dye

There are no warnings in the U.S. (as there is in the European Union) that alert parents that the dyes contained in the foods have been shown to cause behavioral changes and attention issues in children. Without a warning, it’s assumed to be safe and continues to be manufactured and consumed with gusto.

Children see bright colors and demand that their wants be satisfied. Meanwhile, well-meaning parents wonder why their kids are bouncing off the walls and taking medicine for attention deficit disorder (ADD), attention deficit hyperactivity disorder (ADHD), and other behavioral problems that are becoming a pandemic all their own.

The problems aren’t in their brains… it’s in their food.

Behavior isn’t the only concern with food dyes. Laboratory studies continue to show that these dyes, used in almost every food processed in the U.S., have carcinogenic properties.

Every single year, manufacturers dump over 15 million pounds of food dye into our food supply. These food dyes are added simply to make food prettier and more attractive, despite it being known that these dyes cause cancer in both lab animals and humans. They have no nutritional qualities whatsoever, but continue to be used.

Food Dye Made From Petroleum

Petroleum-based food dyes are particularly dangerous. The dyes contain benzidine, proven to dramatically raise the risk of developing cancer. The Federal Food and Drug Administration (FDA) has stated that ingestion is typically under the “concern threshold.” Their routine tests are in question for not fully recognizing the true amount or levels that a body can store, thereby building up quantities in the system. Nor do they take into consideration the increasing exposure of children to these substances in other products besides their food.

With a policy of not commenting on topics under review, the FDA remains silent on this issue.

The Center for Science in the Public Interest (CSPI) has accused the FDA of ignoring the evidence and failing to protect the public. With safer alternatives available, there is no reason to continue their use. Safe food dyes include those made from carrots, beets, berries, herbs, and spices such as saffron or paprika.

Orange soda in Britain is colored with pumpkin and carrot extracts, while in the U.S. it is made with Red40 and Yellow6. Cereal bars, thought by parents to be a healthier treat, use Red40, Yellow6, and Blue1 instead of beet, paprika, and annatto (made from seeds of the achiote tree).

Consumer groups are rallying against the FDA, charging them with the responsibility to protect consumers and fight manufacturers that argue against widespread changes.

Studies continue into the dangers of artificial food dyes and additives and the FDA is performing their own assessments as well. In the meantime, as consumers, there are alternatives available.

Where to Find Natural Food Dyes in the U.S.

Major health food chains like Whole Foods and Trader Joe’s have banned items containing artificial dyes and even have natural food colorings available for home baking. Organic foods, including kid favorites like cereals, snack bars, and macaroni and cheese are on supermarket shelves across the U.S.

Organic foods use natural dyes in their process as well as healthier ingredients overall. Homemade foods, rather than manufactured, are the very best alternative, but not always an option for busy families.

Parents should be aware of the dangers and make the best choices they can until the U.S. catches up with the European Union. Diligence and awareness is key to keeping kids safe and healthy.

Knowing the link between food dye and cancer and taking action to avoid them is another step in leading an anti-cancer lifestyle. 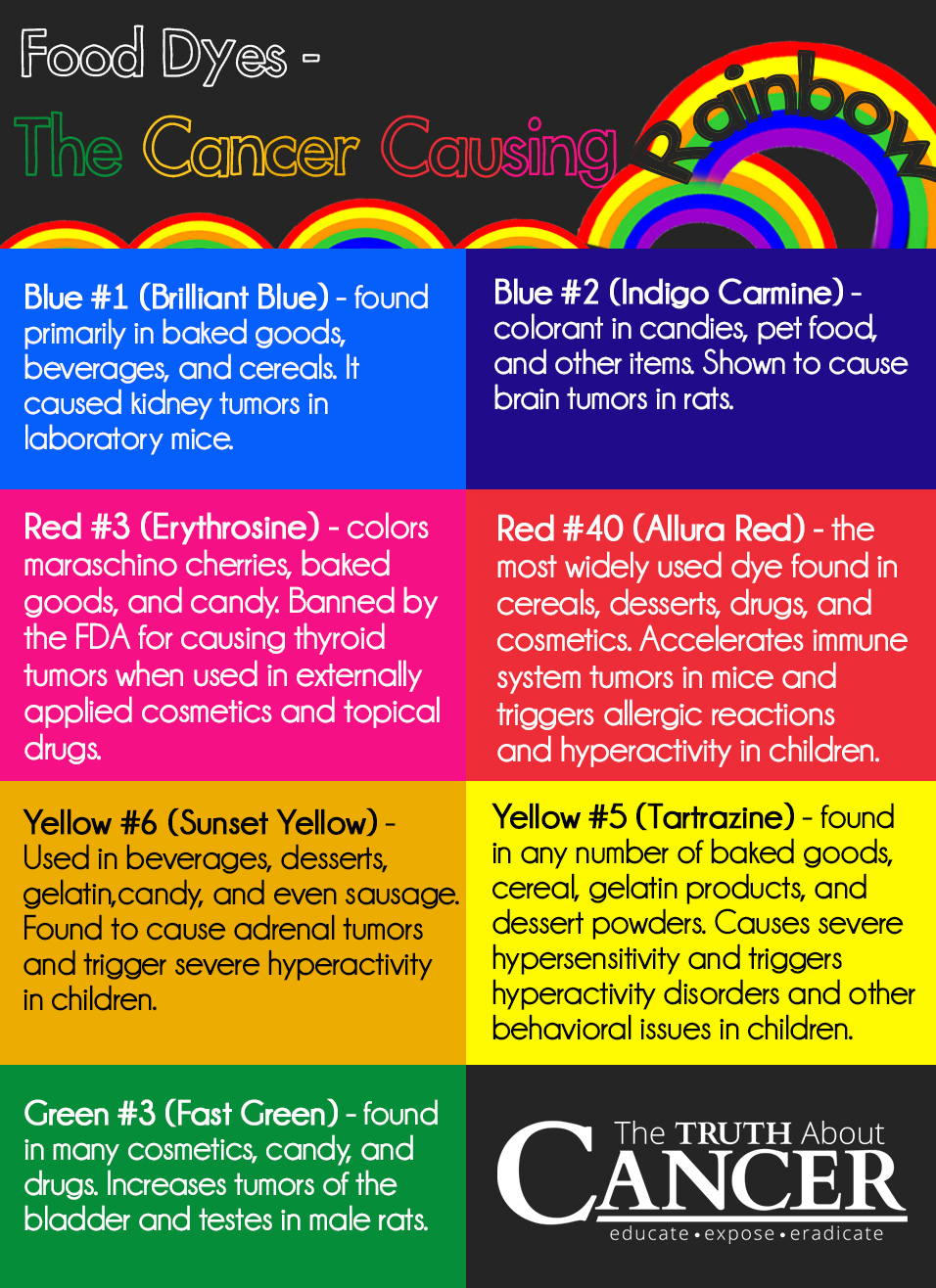