You are here: Home / Cancer Causes / How Safe is an Airport Full Body Scanner? 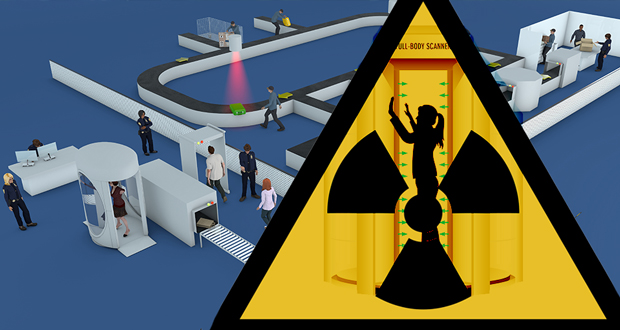 “Step onto the body scanner platform and place your hands in the air; it’s for your safety and security.”

If you’ve traveled through a U.S. airport within the past few years, you’ve probably had a government screener say something along these lines. Every day travelers are herded through the checkpoint corrals into one of these anti-terrorism full body scanners. The Transportation Security Administration (TSA) claims these so-called “advanced imaging technology” devices are just as safe as traditional metal detectors. But is this really true?

When they were first rolled out post-911, backscatter X-ray tunnels quickly became standard fare at commercial aviation facilities nationwide. The TSA claimed the amount of low-intensity radiation emitted by these machines was safe, releasing less than 10 microREMs of radiation per screening. This is an amount equivalent to what an airplane passenger might incur after just two or three minutes of flying at cruising altitude.

This claim was later debunked. It was revealed that concentrated radiation blasted directly at a person’s body is much more harmful than the random patterns of ionizing radiation sent in all directions from the cosmos and by an airplane’s navigational equipment during flight. Not long after these facts came to light, the TSA came up with a different type of screening technology that it said was safer − the millimeter wave machine.

According to the TSA’s Frequently Asked Questions page, millimeter wave imaging technology “uses harmless electromagnetic waves to detect potential threats, which are highlighted on a generic outline of a person appearing on a monitor attached to the unit. If no anomalies are detected, an ‘OK’ appears on the screen with no outline.”

It all seems simple enough, right? Unfortunately, this explanation by the TSA is trite at best, and deliberately misleading at worst. A closer look into millimeter wave technology and the ways in which it affects the human body during an average TSA screening reveals a truth that the government doesn’t want you to know. The doses of electromagnetic radiation emitted by the TSA’s millimeter wave technology machines can cause cancer. 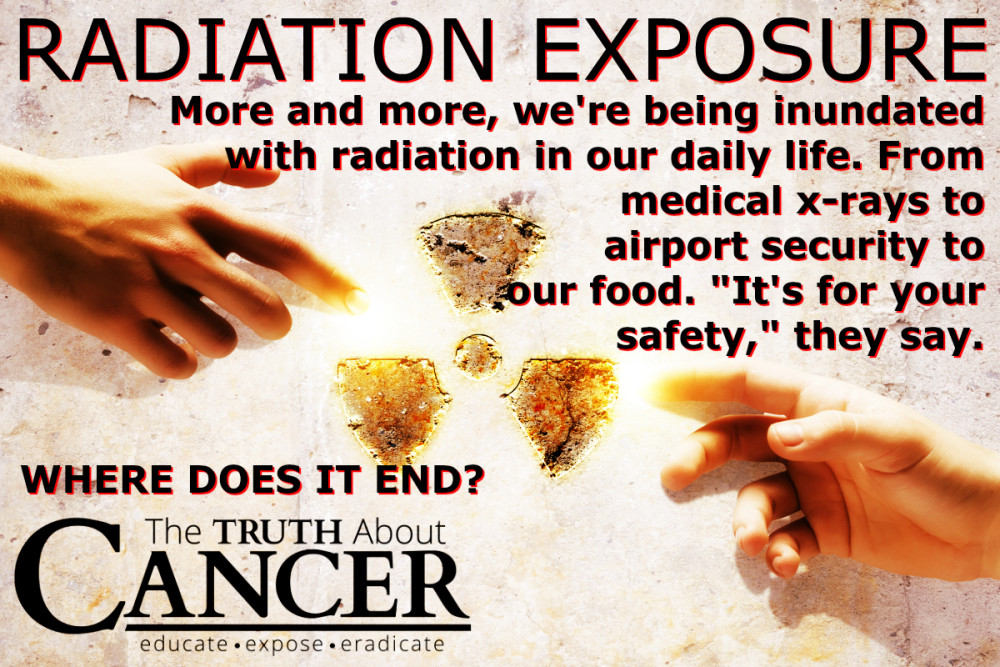 The fact that millimeter wave technology is used in the treatment of skin cancer (due to its known skin-heating properties), means it undeniably has an effect on human cells. This heating is a direct result of microwave frequencies entering the skin and inducing a certain level of atomic motion within the cellular structure. This is really just a fancy way of saying that millimeter wave radiation microwaves your skin.

Just how much this millimeter wave radiation microwaves your skin is where push comes to shove. But most scientists are in agreement that any amount of radiation poses at least some level of risk. The public deserves to know both this level of risk and what they can do to minimize or eliminate it.

Though not ionizing in nature, millimeter wave radiation is still potentially damaging to the human body. A 2012 paper published in the journal Radiation Research admits that the safety of millimeter wave body scanners is “difficult-to-impossible to prove using publicly accessible data.” This means that TSA claims of negligible risk associated with their use represent the opinion of the TSA, and not scientific fact.

What we do know is that millimeter waves, which exist in the 30-300 GHz range, cause “multiple biological effects,” according to another study published the same year in the International Journal of Oncology. Though this study looked specifically at millimeter wave radiation in the context of cancer treatment, the morphological effects demonstrated reveal that this supposedly “safe” form of radiation causes cellular change that inhibit cellular growth.

Like all other forms of radiation, millimeter waves don’t differentiate between healthy cells and malignant cells. Whatever cells they’re targeted at are the cells they destroy. In the case of concentrated radiation blasts from millimeter wave body scanners, it means every cell on the surface of your body.

How Millimeter Waves From a Full Body Scanner May Cause Cancer

What this all means is that millimeter wave body scanners act as giant microwaves that literally heat travelers’ bodies at the cellular level using ultra-high frequencies not normally found in nature. Microwave ovens operate at nearly the same frequencies as these machines. They induce cellular vibrations strong enough to generate heat in food, so imagine what it’s doing to your skin.

But these are just minor thermal effects, you might be thinking, since an airport body scan only lasts a mere two seconds or so as opposed to 30 seconds to a minute to warm a bowl of soup in a microwave oven. But the principle is still the same, especially when taking into account repeated exposures. 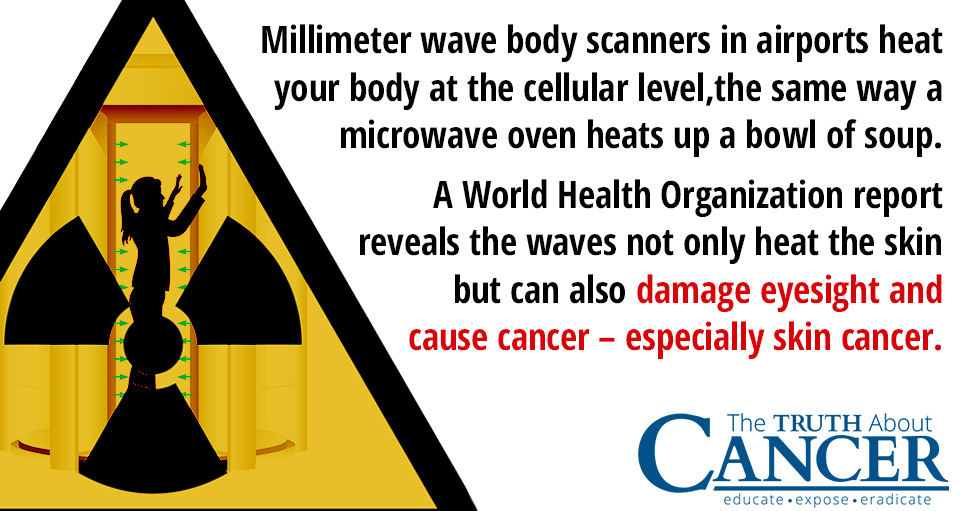 And you also have to consider the non-thermal effects of millimeter wave radiation, which disrupt cellular communication in ways that science has yet to fully delineate. The United States Air Force conducted its own research into ultra-high frequency, non-ionizing radiation as a potential weapons technology. Interestingly, in the process they uncovered evidence that the non-thermal activity of millimeter wave radiation directly interferes with the body’s ability to protect and heal itself.

A World Health Organization (WHO) report adds even more to the conversation, revealing that millimeter waves not only heat the skin but also damage eyesight and cause cancer, particularly cancer of the skin.

A team of researchers from the Center for Nonlinear Studies at the Los Alamos National Laboratory in New Mexico recognized the lack of scientific research into this questionable technology. They decided to investigate for themselves how high-frequency terahertz (THz) waves, like the kind emitted from the TSA’s millimeter wave full body scanners, affect human DNA. They learned that:

“THz waves … unzip double-stranded DNA, creating bubbles in the double strand that could significantly interfere with processes such as gene expression and DNA replication.”

Skip the Full Body Scanner and Opt for a Pat Down

Recognizing these inherent dangers, the best thing air travelers can do is opt out of the TSA screening process when presented with a body scanner rather than a traditional metal detector. By choosing a manual pat-down, air travelers can minimize their radiation exposure and thus minimize the risk of developing cancer.

Though physically invasive and admittedly unconstitutional, a physical pat-down is still better than being blasted with a concentrated vortex of electrical and magnetic energy. As it sweeps around your body, the full body scanner exposes each square centimeter of your body to about 0.013 milliwatts of radiation. Collectively, this is enough to induce gene mutations, nerve damage, sterility, and even cancer.

“Low levels (below 10 mW/cm2) of NIR (non-ionizing radiation) have been found to produce many adverse health effects in animals including temporary sterility, genetic changes, and changes in the transmission of nerve impulses,” explains the Foundation for Advancement in Cancer Therapy (FACT).

“The U.S. Environmental Protection Agency has found preliminary evidence that these low levels may affect the immune system, which means the body may be less able to fight off disease.”

←
Previous
Smoking and Lung Cancer: It’s Time to Kick Butts
→
Next
Why Most People Have a Fear of Cancer (video)