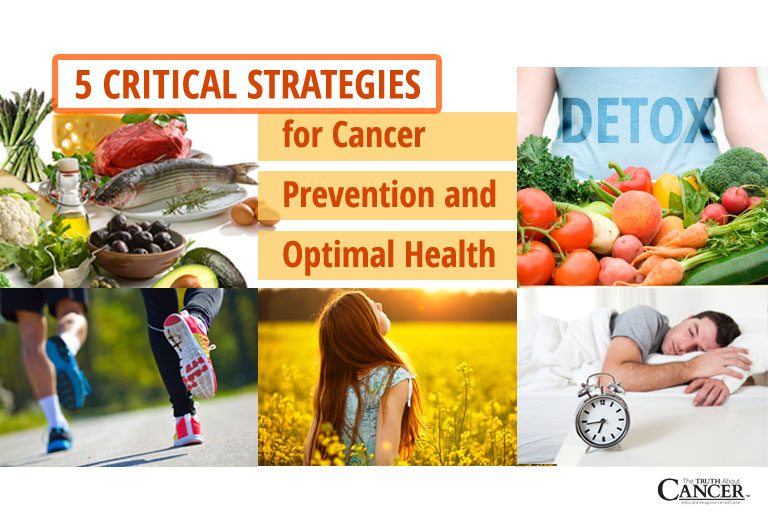 Are you worried about the long-term impact of a poor diet on your health? Do you walk around feeling exhausted most of the time? Are you stressed? Do you have difficulty sleeping? Would you like to be exercising regularly but haven’t managed to work it into your busy schedule? You’re not alone… 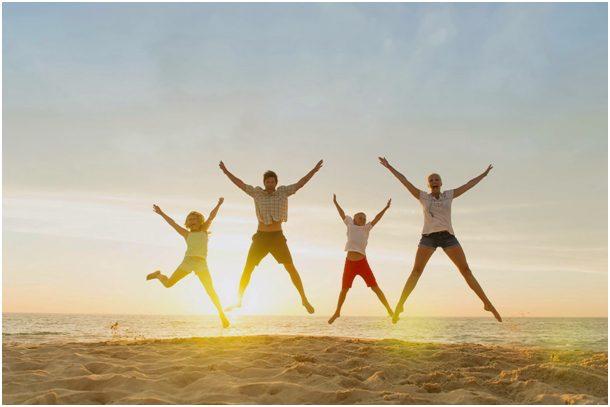 you to think that disease is a matter of chance, the reality is that disease (or a lack thereof) is almost entirely under your control. If you wish to be healthy, there are certain things you can do that reliably and consistently produce a healthy outcome.

In this article, I want to share with you my top five strategies for optimal health, specifically as it relates to fighting cancer or cancer prevention.

Starting on an alternative cancer treatment protocol is like putting wood into the fireplace (i.e. your body). Once that wood catches fire and starts burning, the fire is going to kill the cancer cells that have colonized in your fireplace. However, eating a poor diet is like pouring water on that same fire; a bad diet will destroy many alternative cancer treatments. In fact, many scientific studies have shown that a poor diet alone can cause cancer. 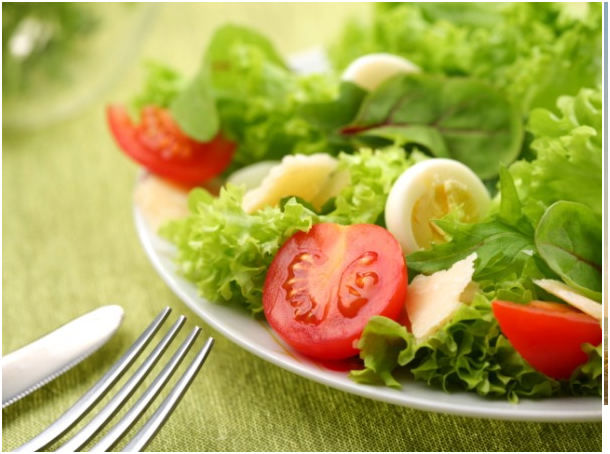 
In reality, detoxification is probably the most important yet overlooked part of an overall health plan and is critical for cancer prevention.

Detoxification is the process of neutralizing, transforming and eliminating toxins from the body and clearing excess mucus and congestion. A poor diet, poor digestion, a sluggish colon, reduced function in the liver, and poor elimination from the kidneys all lead to increased toxicity.

What is the process of detoxification? First, cleanse the colon, then rid your body of parasites, then cleanse the kidneys, liver and gall bladder, the blood and the remaining organs. This may be best order to follow.

Detoxification is an essential part of overall health and it is a crucial part of the cancer-fighting regimen. Did you know that God has given us a natural system to assist us with internal detox? This leads me to my next strategy, which is a specific exercise similar to jumping on the trampoline… it’s called rebounding.

Research has led many scientists to conclude that jumping on a mini-trampoline (i.e. rebounding) is possibly the most effective exercise devised by man, especially because of the effect rebounding has on the lymph system.

The human body needs to move. The lymph system bathes every cell and carries nutrients to them while removing toxins such as dead and cancerous cells, heavy metals, infectious viruses, and other assorted wastes. But unlike the blood (which is pumped by the heart), the lymph is totally dependent on physical exercise.

Without adequate movement, the cells are left stewing in their own waste products and starving for nutrients, a situation which contributes to cancer and other degenerative diseases − as well as premature aging. Rebounding has been shown to increase lymph flow by up to 30 times! Also, all of the body’s cells become stronger in response to the increased “G forces” during rebounding, and this cellular exercise results in the self-propelled immune cells being up to 5 times more active!

Rebounding on a mini-trampoline directly strengthens the immune system, increases lymph flow, and oxygenates the blood. In my opinion, it is the best exercise to prevent and fight cancer.

Exercise also causes the body to sweat, and sweating is essential in the detoxification process. In addition to exercising, I sit in a sauna nightly to make sure that I’m sweating out toxins every day. 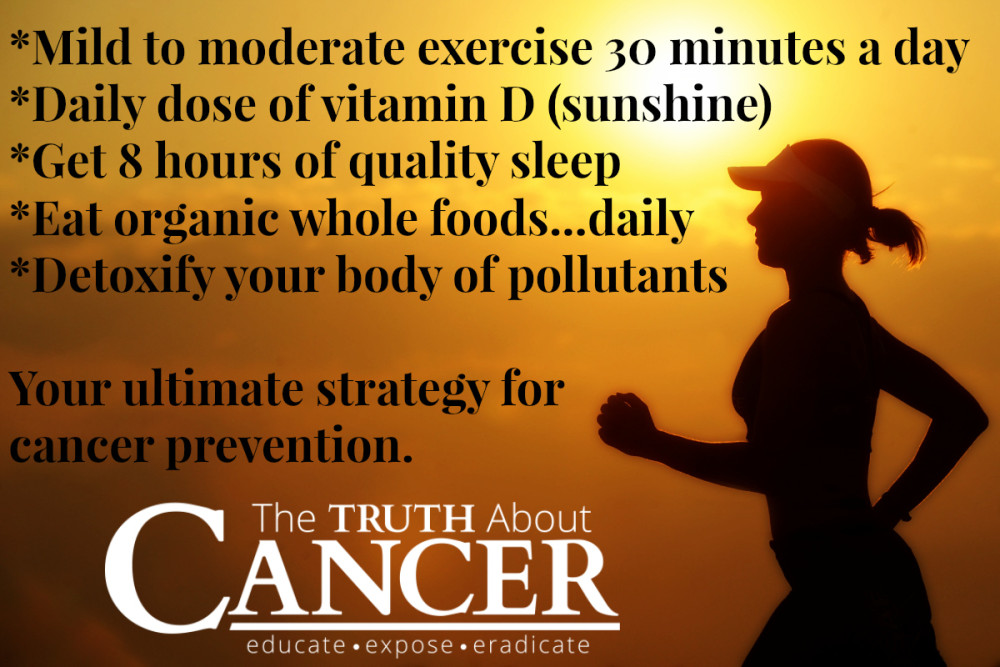 Vitamin D is automatically produced when the cholesterol in your skin absorbs the ultraviolet B (UVB) rays from the sun. It then circulates throughout your body to prevent cancer (and other diseases). It’s interesting to note that your body automatically produces just the right amount of vitamin D. So, if you get more sunlight than you need, you cannot overdose on vitamin D. Your skin will produce only what’s needed, and no more. (You do need to be careful about burning in the sun as too much exposure can create a problem.)

Researchers in Belgium appear to be the first to show that vitamin D lowers C-reactive protein (CRP), a measure of systemic inflammation. In critically ill patients. CRP is elevated when there is inflammation, and chronic inflammation is a risk factor for a number of conditions including coronary heart disease, diabetes, Alzheimer’s, and cancer.

Don’t fall for the “sunscreen myth.” The idea that sunscreen prevents cancer is a myth promoted by a greedy “tag-team” effort between the “cancer industry” and the sunscreen industry.

Sunlight is actually good for you (especially the UVB rays), and sunscreens filter out UVB! The main chemical used in sunscreens to filter out UVB is octyl methoxycinnamate (aka “OMC”) which has been shown to kill mouse cells even at low doses. Plus, it was shown to be particularly toxic when exposed to sunshine. And guess what? OMC is present in about 90% of sunscreens! 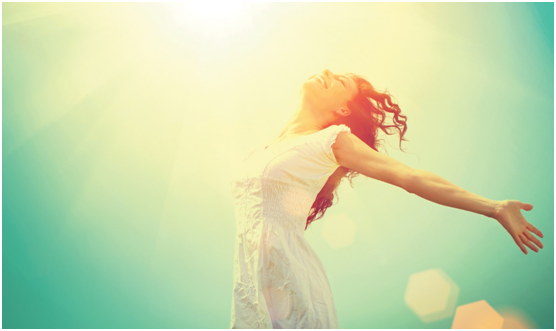 No matter how well you eat, how often you exercise, and how much time you spend planning and cooking your meals, you can never be truly healthy if you don’t get enough quality sleep.

Lack of sleep can alter your metabolism, making you prone to weight gain, diabetes, heart disease, and cancer. It can dampen your immune response, leaving you susceptible to colds and flu. Not getting enough sleep can make you feel so overwhelmed and exhausted that you stop making good choices and end up doing what is easiest at the time.

You spend 1/3 of your life in your bedroom, so you need to make sure that it’s conducive to rest and relaxation. At night, turn off the Wi-Fi in your house and make sure that the electronics are not too close to your bed, due to the damaging effects of EMF (electromagnetic frequencies).

Try to also avoid things that keep you awake (like coffee and sodas). Of course there are many more reasons to avoid sodas (especially diet sodas), but drinking these beverages before bed can keep you awake due to the caffeine.

And don’t eat a large meal before bed. In addition to causing weight gain, a big meal at night can rev up your metabolism and make it difficult to wind down. Also, our internal clocks (circadian rhythm) work best when we stick to a predictable schedule. Try to go to bed around the same time every night and awaken at roughly the same time every morning.