You are here: Home / Cancer Causes / Does Aspartame Cause Cancer? (video)

Video Transcript: Does Aspartame Cause Cancer?

Dr. Blaylock: Aspartame has been studied for a long time. What a researcher did, he said, “I’m going to look at all the research that’s been done. Those that are sponsored by the makers of aspartame versus independent studies.” What he found, virtually, all the independent studies found harmful problems. None of the ones sponsored by the maker for it found any problems.

Ty Bollinger: So you’ve got to look at who does the studies.

Dr. Blaylock: What the maker does is he goes out and he pays scientists to come up with articles, or ghost written articles, that say it’s safe. And he fills the literature with it. And then when he goes before a camera and says, “Look, these are the pile of studies that show it’s safe.”

So the news commentator looks at this and says, “Well, there’s been hundreds and hundreds of studies that show it’s safe.” They don’t even show the real studies that were done. The carefully done studies show it’s not.

Now, the carefully done studies show that it’s a carcinogenic agent and that it combines with other carcinogens, like nitrites, from your food to become even more carcinogenic.

They found, in the original studies used to get approval for using NutraSweet, increased brain tumors. About a six-fold increase in brain tumors. They found increased lung tumors, breast cancers, breast tumors. All sort of tumors and thyroid cancers were found. But what the investigation did after the approval – because they approved it over all these findings – they found out that they were taking out the tumor from the experiment and throwing it away and writing down that it was normal.

Dr. Blaylock: Yes, all this was discovered. It’s under oath in congressional hearings. A lot of these amoral shenanigans were done to get it approved in the first place. The guy who’s head of the committee that approved it, after he approved it, within months he went to work for the company that was a promoter of aspartame. So that’s sort of this revolving door we talked about between industry and government.

Now, the studies have consistently shown that it’s harmful. It does brain injuries, it produces abnormalities of the immune system, it affects the reproductive system, and it can cause cancer. 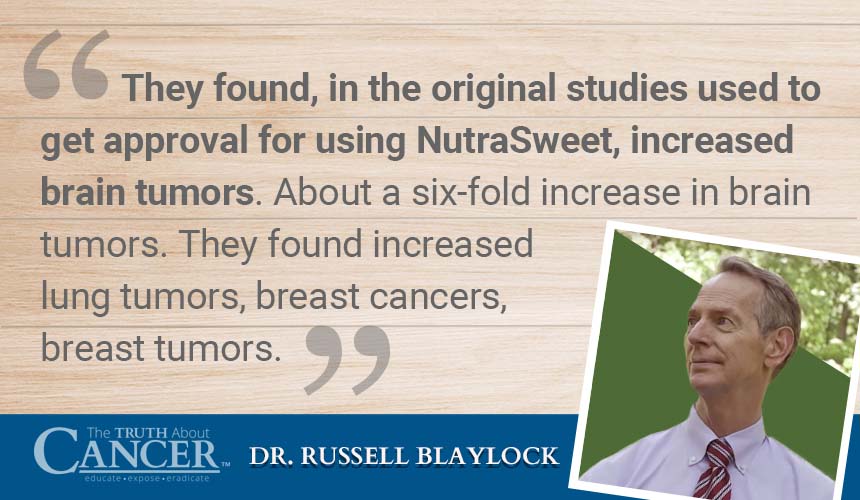 Ty Bollinger: And wasn’t there a study in Italy?

Dr. Blaylock: The Italian study was a study—I think his name was Rossini but he is one of the most respected researchers on carcinogenic agents. What he does is he tests these agents to see if they cause cancer. So they gave him this project. They said, “Look at this aspartame and see if it’ll cause cancer in animals.”

He did the largest animal study ever done. Now, his research is considered impeccable, almost unquestionable. Because he was so careful in doing it and so respected. He did it and he found that there seemed to be an increase in lymphoma and leukemia, and probably breast cancer, and maybe brain tumor. And they wouldn’t accept it. So he redid it with a lifetime study of the animal, as you would in human, because the human will keep drinking this stuff for a lifetime. And he found that there’s definitely an increase in leukemia and lymphoma, most likely increase in breast cancer, and brain tumor.

So then it went to the United States. The CDC said, “We’ll look at his study and give a final determination for the American audience.” And everybody knew how it was going to turn out. Exactly what they said, “well, we’ve had some criticism about how the study was done.” You know the criticism was? Well, “you did a lifetime study. We cut it off at two years.” And he said, “of course you do. That’s when the tumors start appearing.” So they cut off the study before the tumor started showing up.

Ty Bollinger: It’s the same thing Monsanto did with the GMO studies.

Dr. Blaylock: Yes, exactly. They knew at which point you were going to see the problem with the GMO so they cut the study off before that appeared. And then they said, “we didn’t find anything.”

Ty Bollinger: And they did the same thing with the aspartame.

Dr. Blaylock: Yes, I mean, it’s just prestidigitation. It’s a magic act. And, of course, the public doesn’t know these things. The public doesn’t understand these delayed effects and onsets. To them it’s a mystery. But if you understand the science and that this tumor, or this destruction of kidneys, or this destruction of brain, is not going to occur until certain time and then they cut off the study before that would happen and claim safety. It’s a farce.

It’s kind of a crude analogy. But I’ve often referred to this—when it comes to the GMO study, I was not aware of the aspartame study—but it’s really the equivalent of me grabbing somebody by the hair and dunking them underwater and then after five seconds you pull them up and you say, “see, water doesn’t cause drowning.”

Ty Bollinger: Yes, they didn’t drown. Because you didn’t do it long enough. And then they don’t do the studies long enough mainly because they’re only required to be self-authored studies.

Dr. Blaylock: Right. I mean, they do the study, they pay for the study, and they cut it off when they want to. But I couldn’t believe that this was the criticism, it’s that you carried the study on too long. Humans are taking it. They don’t stop taking it at age 50 or age 30. They are taking it for a lifetime.

Ty Bollinger: I literally see guys and gals at the Stop and Go’s or 7-Elevens with these 100 ounce, huge half gallons of diet sodas.

Dr. Blaylock: Right. What we used to call “belly washers.” Huge drinks and they drink all of it.

Ty Bollinger: And they drink all of it. Also, from what I understand about aspartame is that it has something to do with the release of leptin or ghrelin so that you don’t feel satisfied. And you actually gain weight. So is there a link with obesity?

Dr. Blaylock: Yes. What they found is—the hypothalamus is where leptin operates to curb the appetite. There are receptors there—in this particular nucleus, the arcuate nucleus—unless that leptin can react with that receptor, it doesn’t work. Well, glutamate is a transmitter for that receptor. And aspartame has aspartic acid which is also an excitotoxin just like glutamate. It burns out that nucleus.

So now the leptin won’t work. The leptin levels start rising, which is inflammatory, and you start gaining weight. Actually, what they found is that aspartame is not good for weight loss. It actually stimulates gaining of weight. The other thing is that the tyrosine in it, the phenylalanine, stimulates hypoglycemia which makes you hungry.

Dr. Blaylock: So you’re going to eat more. They knew that. It’s not that they didn’t know it. They knew it.

Ty Bollinger: You wonder if that was one of the reasons that they put it out there. You don’t know. It’s all speculation.

Dr. Blaylock: Yes. You can’t prove it but I know that they knew that this research had been done.

Ty Bollinger: And we know that it does cause obesity, it is linked to cancer. We know those things about aspartame.

Dr. Blaylock: Oh, yes. I would think that you would really be foolish with all we know about aspartame to keep using it. Particularly giving it to children. Because the child’s brain is in its stage of formation. A child’s brain—the more complex part of brains are not complete until age 27. So all these brain pathways are busy forming their connections. And you’re pouring this toxin in, you’re damaging it.

So what happens is that the kid has a behavior problem. You find out you can’t control him. He has these outbursts of anger, or he’s depressed, or he has anxiety, has panic attacks.

Over 2 million people have joined The Truth About Cancer’s fight to eradicate cancer once and for all. If you want to find real solutions…

plus hear the truth about all the misinformation out there about cancer, click here to join the movement (it’s free). 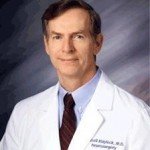 Dr. Russell Blaylock, M.D. is a nationally recognized board-certified neurosurgeon, health practitioner, author and lecturer. For over a quarter of a century, he practiced in the demanding field of neurosurgery in addition to having a nutritional practice. He recently retired from his neurosurgical duties to devote his full attention to nutritional studies and research. Dr. Blaylock has authored three books on nutrition and wellness: "Excitotoxins: The Taste That Kills," "Health and Nutrition Secrets That Can Save Your Life" & "Natural Strategies for Cancer Patients."