You are here: Home / Cancer Prevention / 4 Factors and Prevention Strategies for Cancer Metastasis 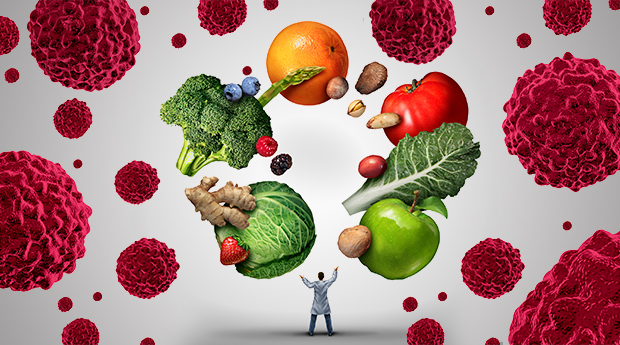 Increasing mortality rates associated with cancer metastasis has significantly impacted the cancer research community over the last decade. The spread of cancer is complex and involves a domino effect of influences which promote an environment for cancer cells to thrive.

This article will cover the 4 key factors that cause cancer metastasis in the body. You will also learn natural ways to combat these influences from wreaking havoc within your cells and how to detect cancer early.

One of the key driving forces behind cancer metastasis is systemic inflammation. It is suspected that chronic inflammation is the primary cause of 25% of all human cancers. Inflammatory conditions contribute to the ability of cancer cells to rapidly grow, form tumors, and even resist cancer treatment drugs.

Inflammation increases tissue damage and is a major cause of epigenetic changes. While scientist once thought that the genes we were given at birth were unchangeable, the field of epigenetics provides evidence that environmental factors we are exposed to (ie. nutrition, toxins, stress) can turn genes off and on causing genetic abnormalities.

Nrf2 (nuclear factor-E2-related factor 2) signaling is involved in numerous functions in the body associated with healing. Nrf2 aids in DNA repair and has anti-inflammatory properties that regulate cellular adhesion. It also regulates enzyme activity and apoptosis and otherwise acts as a super antioxidant defense system.

This transcription factor is intrinsically involved in maintaining homeostasis throughout the body via stress management. Three major stress molecules including reactive oxygen species (ROS), hydrogen peroxide (H202), and reactive nitrogen species (RNS) are toxic to biological systems and are regulated by Nrf2.

The overexpression of metalloproteinases or MMPs is indicative of cancer metastasis. MMPs are a family of enzymes that break down the extracellular matrix within a cell. Typically, a healthy cell utilizes this connective network of tissue to communicate with other cells and its environment while also providing structure and various physiological functions.

When this matrix is degraded, there is an increased risk of malignant tumor growth. This is due to increased cellular permeability, response changes to surrounding stimuli including angiogenesis (new blood vessel growth), and increased systemic inflammation. Of the 21 MMPs recognized in the development of chronic conditions and disease, a select few are used as biomarkers in identifying aggressive cancer types.

MMP-13 activity is prevalent in metastatic breast cancers, urinary cancer, as well as skin, head, and neck cancers. MMP-11 is evident in invasive breast and skin cancer. MMP-2 and MMP-9 play a key role in cancer malignancy because they are associated with increasing tumor growth.

Specifically, these MMPs support metastatic growth factors like angiogenesis. They act as traffic controllers sending signals to inflammatory compounds and light the path to receptors. Once MMPs bind to these receptors they activate numerous other metastatic influences.

This energy fuels a tumor to create biological changes once it invades and interacts with endothelial cells. Thin layers of endothelial cells lines blood and lymphatic vessels. Once interaction with these cells is initiated, cancer has the ability to circulate throughout the body and invade distant tissue.

As infection increases and the cancer grows, conditions of hypoxia increases, further inducing LOX and giving rise to a cascade of adverse but favorable conditions to the tumor. Chronic inflammation leads to inflamed cells, prolonged oxidative stress, and the inability of the body to identify and eliminate the infectious cancer growth.

The following strategies will increase the chemoprotective properties of your cells and limit cellular toxicity that stimulates cancer metastasis.

Improving the regulation of MMP activity in cells is essential to reducing the breakdown of connective tissue within a cell and combating cancer metastasis. Some of the best dietary compounds that inhibit MMP activity and promote detoxification in the body are:

Incorporating more of these antioxidants into your diet has been shown to effectively treat colon, prostate, kidney, and liver cancer − to name only a few. Simultaneous dietary phytochemicals provide significant cancer protective benefits to healthy cells and create cytotoxic effects to tumor cells. You can also support cellular integrity by consuming foods rich in zinc, magnesium, and vitamin C.

Consuming an anti-inflammatory chemopreventive diet is the best way to prevent the aggressive behavior of cancer metastasis. These nutrients inhibit inflammatory enzymes and suppress carcinogenic activity:

The key to preventing chronic inflammation and suppressing cancer growth is to limit foods high in sugar and starch. Genetically modified grains have flooded the marketplace and fuel cancer growth by supplying a steady feed of glucose.

Rather than feeding cancer, starve it by consuming foods that help maintain low blood sugar levels. These foods include 100% grass-fed beef and raw cheeses, and organic pasture-raised poultry. Adding low-carb fermented foods and beverages to your diet will help to provide an alkalizing environment in your tissue and organs inhibiting the development and spread of cancer. 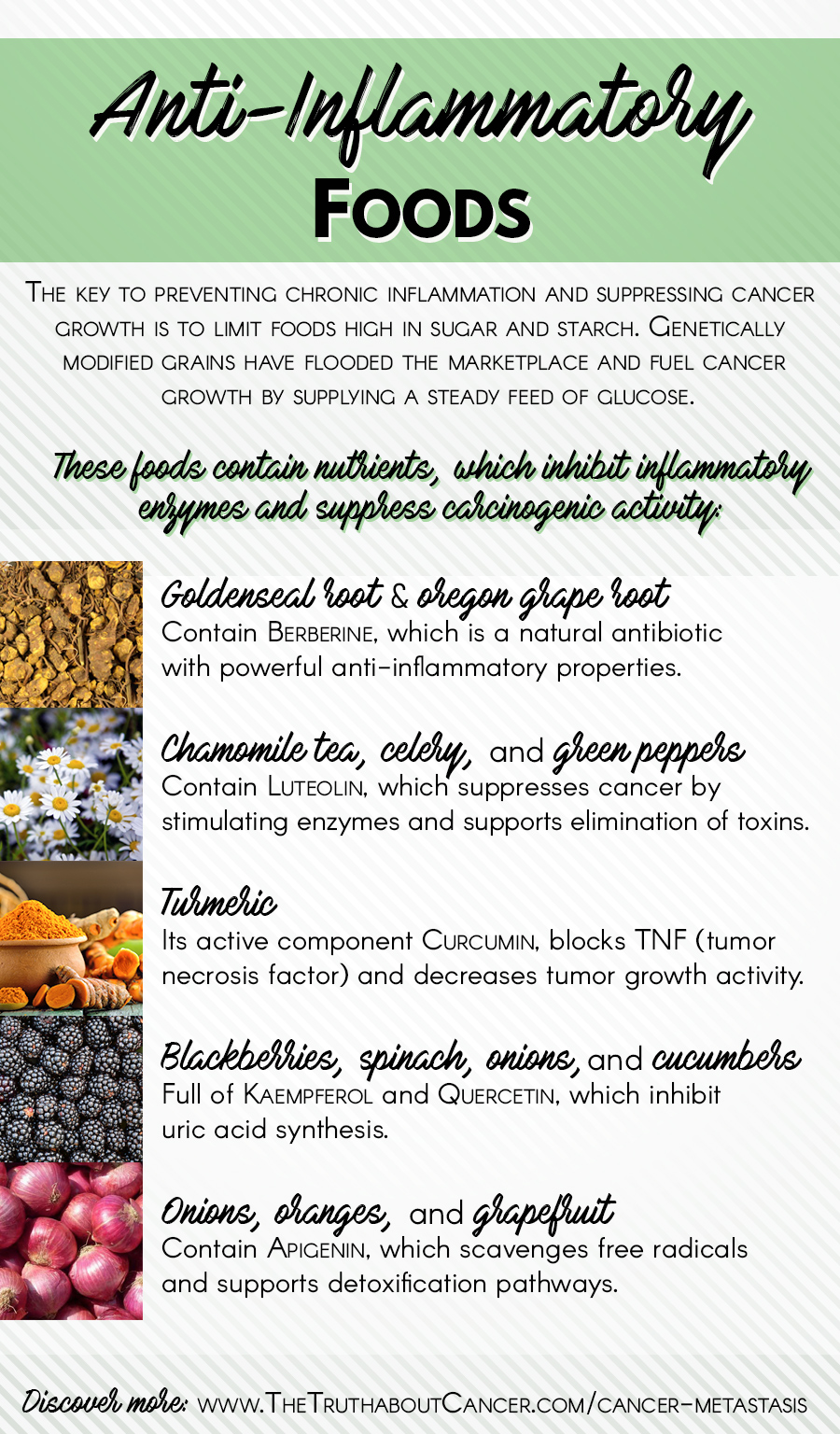 It is critical to strengthen the anti-inflammatory mechanisms regulated by Nrf2 signaling in order to protect your cells against oxidative damage and free radical activity. This is why the nutrients abundant in a plant-based diet have such powerful chemopreventive properties. Phytochemicals in fruits and vegetables prevent cancer development by upregulating antioxidant enzymes and detoxification processes.

Dietary phytochemicals support the Nrf2 defenses in the following ways:

Key dietary compounds that support the Nrf2 Pathway include curcumin, resveratrol, green tea extract, and sulforaphane, among others.

An affordable and more accurate form of identifying cancer growth in the body is thermography testing. Thermography screening offers a painless and safe route for analyzing physiological changes in the body that characterize cancer growth. This diagnostic tool creates a digital map of heat patterns identifying areas where increased blood flow may indicate the presence of infection.

Unlike other diagnostic cancer screening which may only identify anatomical changes and the presence of a tumor, thermography screening provides early detection from the start of cancer growth. Any asymmetrical thermal patterns of the body provide information about abnormal vascular function helping to identify cancer before it develops the ability to metastasize.

←
Previous
Why Are Doctors Rushing Patients Into Conventional Cancer Treatments? (video)
→
Next
Are IBD Sufferers at an Increased Risk for Certain Types of Cancer?