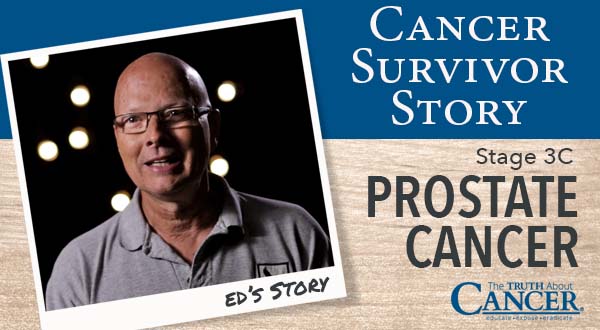 It all started during what Ed thought was a routine doctor’s visit on January 10th, 2008.

That’s when he and his wife heard his doctor say, “You have prostate cancer.”

Ed had stage 3C prostate cancer. It was hard to take in. And before he knew it, his doctor was already telling him what his treatment protocol would be.

Ed shook his head and said, “No. We’re going to look at our options.”

When he and his wife got out to their car in the parking lot, they cried and prayed together. That’s when their journey began.

They went the conventional treatment route, and every doctor they met did two things. One, they weren’t flexible about their prescribed treatment – it was their way or the highway. Second, when asked what would happen if the cancer came back, they said it wouldn’t be good and refused to discuss it further.

Ed’s cancer came back only two years later in 2010. His PSA numbers started to jump. That’s when his wife found The Truth About Cancer. Even though he was skeptical of natural methods in the past – both his mother and sister are nurses – Ed decided to try alternative treatments and lifestyle changes, including diet.

Watch the video above to hear Ed’s full story and what he continues to do to live a long and healthy life.