You are here: Home / Cancer Causes / Are Your Cancer Symptoms Actually Sending You a Message? (video)

Video Transcript: Are Your Cancer Symptoms Actually Sending You a Message?

Ty Bollinger: So let’s talk about cancer. What exactly is cancer Robert?

Dr. Robert Scott Bell: I look at it as somewhat of a cellular rebellion or it’s an abandoned ship scenario. You have maybe inadvertently… you didn’t know what was happening… environmentally there’s been a major degradation within your body or a toxic pollution type acquisition that you didn’t know… and it grew and grew and grew.

And you didn’t understand that it was happening, much less how to undo it. And the cells become corrupted. The metabolism of the cell changes to the point where, as we know in cancer it doesn’t die. There’s no apoptosis [programmed cell death] anymore. But the cells themselves, being so toxic, they can’t survive in a normal way, so there’s an adaptation. A cellular adaptation for survival.

You talked about a tumor, for instance. When the body has some level of strength, and it certainly has the intelligence whether it has the strength or not, it can encapsulate these toxic cells in a tumor. I think that as you mobilize the defenses and prove immunity, you can actually see, as you describe, these cells grow. A tumor grow initially. But the body is mobilizing and encapsulating and protecting the entire body in that mechanism or in that way.

You and I have talked about it on my show as well together about the idea of the success of allopathic cancer treatments when they say, “Well look, the tumor shrunk. It’s so small yet the patient is dead.” You know, what good is that? Is it really about targeting and killing cancer cells or is it more about how do we re-establish the healthy integrity and the full metabolic functioning as the intelligence, the body, and these cells know to do? 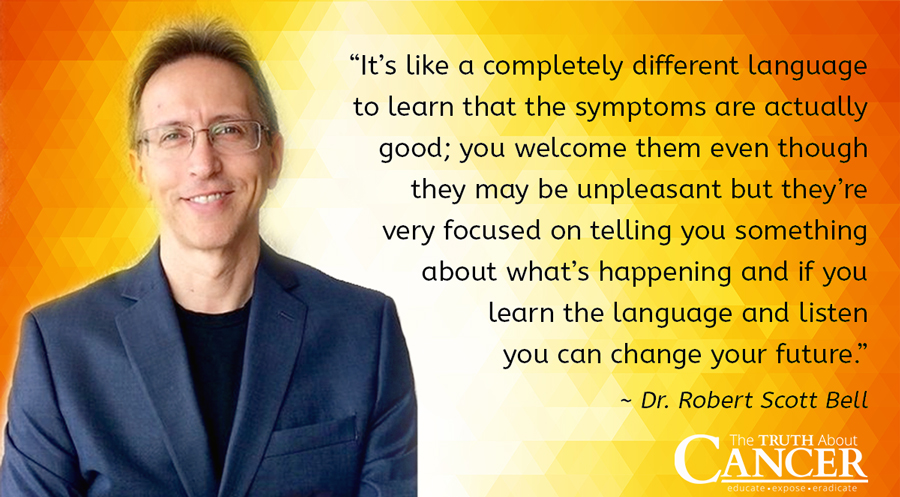 Ty Bollinger: So it’s really a fundamental difference in treating symptoms versus finding the cause?

Dr. Robert Scott Bell: Managing symptoms, managing disease. It’s very profitable, as is the oncological field because of its monopoly status. But healing is a whole different paradigm. That’s why sometimes “never the twain shall meet” when you try to talk to some folks that are programmed in a way I was growing up. It’s like a completely different language to learn that the [cancer] symptoms are actually good. You welcome them even though they may be unpleasant, but they’re very focused on telling you something about what’s happening. And if you learn the language and listen, you can change your future.

←
Previous
Top 16 “Bizarro World” Stories of 2016
→
Next
Are These 3 Things Stopping Your Healthy Morning Routine?