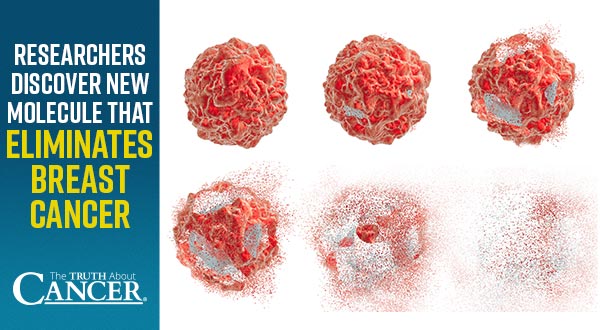 Each year, over 250,000 women (and nearly 2500 men) are diagnosed with breast cancer in the United States. 1 in 8 women will be diagnosed with invasive breast cancer in their lifetime. Approximately three-quarters of cases are a type called estrogen receptor-positive, in which the cancer cells have a receptor in their membranes that binds to the hormone estrogen. Historically, the standard Western treatment has been surgery, chemotherapy, and radiation.

But a new breakthrough study from University of Illinois Urbana-Champaign has discovered a molecule that may change the way we treat breast cancer. The new approach kills 95-100% of cancer cells in mouse models of human estrogen-receptor-positive breast cancers and their metastases in bone, brain, liver and lungs. The newly developed drug, called ErSO, quickly shrinks even large tumors to undetectable levels.

The research was recently published in the journal Science Translational Medicine.

“Even when a few breast cancer cells do survive, enabling tumors to regrow over several months, the tumors that regrow remain completely sensitive to retreatment with ErSO,” said University of Illinois biochemistry professor David Shapiro, who led the research with Illinois chemistry professor Paul Hergenrother. “It is striking that ErSO caused the rapid destruction of most lung, bone and liver metastases and dramatic shrinkage of brain metastases, since tumors that have spread to other sites in the body are responsible for most breast cancer deaths,” Shapiro said.

“Because this pathway is already on in cancer cells, it’s easy for us to overactivate it, to switch the breast cancer cells into lethal mode,” said graduate student Darjan Duraki, who shares first-author status on the new study.

Breast cancer cells with receptors for estrogen prepare for the stresses of rapid growth by activating a pathway called the anticipatory unfolded protein response. This stress response pathway can help breast tumors develop resistance to conventional anticancer drugs, which work by blocking or inhibiting the estrogen receptor.

But the new drug, ErSO, binds to a different part of the estrogen receptor. This has the effect of overactivating the stress response pathway, with fatal consequences for the cells. Crucially, the drug appears to be selectively toxic, only killing cancer cells and not healthy cells.

ErSO is nothing like the drugs that are commonly used to treat estrogen-responsive cancers, Shapiro said.

“This is not another version of tamoxifen or fulvestrant, which are therapeutically used to block estrogen signaling in breast cancer,” he said. Even though it binds to the same receptor that estrogen binds, it targets a different site on the estrogen receptor and attacks a protective cellular pathway that is already turned on in cancer cells, he said.

“Since about 75% of breast cancers are estrogen-receptor positive, ErSO has potential against the most common form of breast cancer,” said graduate student Matthew Boudreau, also an author of the study. “The amount of estrogen receptor needed for ErSO to target a breast cancer is very low, so ErSO may also work against some breast cancers not traditionally considered to be ER-positive.”

The unfolded protein response is a regulatory mechanism that kicks in when unfolded proteins start to accumulate in the endoplasmic reticulum. This is a structure within cells that works like a production line to fold newly created proteins into their final shapes.

Normally, after the stress response has reduced the number of unfolded proteins, it shuts down once again. In breast cancer cells with estrogen receptors, however, the stress response remains switched on in preparation for rapid growth and protein production.

The researchers found that ErSO works by further cranking up the stress response to a degree that is fatal for the cancer cells. Specifically, one of the effects of ErSO on cancer cells is to release a flood of calcium ions from the endoplasmic reticulum within minutes of exposure to the drug.

“This release of calcium triggers the strong and sustained activation of the stress response pathway but does not itself kill the cancer cells,” Shapiro said. “It is the subsequent loss of energy in the cancer cell and the inability to produce new proteins that play key roles in the death of the cancer cells after exposure to ErSO.”

While more trials are needed to fully demonstrate the safety and efficacy of this new molecule, it’s a promising shift from the “scorched earth” approach that has dominated modern oncology for decades.

But they say that an ounce of prevention is worth a pound of cure. And while there are some genetic markers that increase the risk for certain breast cancers, there are plenty of easy lifestyle changes you can make to lower your breast cancer risk.

Maybe you picked up some bad habits in your teens and 20s, like smoking or eating junk food. NOW is the perfect time to make the changes that will turn into healthy lifestyle habits later on. These include cutting back on sugar and eating more green veggies, organic proteins, and healthy fats. They also include drinking the right amount of fresh, pure water, and getting into a self-nurturing routine that includes stress-reduction techniques such as meditation and healthy forms of exercise.

Toxins are also a major contributor to cancer. Get in the habit of going organic when it comes to your food sources and natural beauty products. Learn about how to create a “toxin-free” home; this includes reducing your exposure to Wi-Fi and cell phone electro-pollution. You have a lot you want to accomplish! Get in the habit of detoxing your body regularly through short-term fasts, enemas, or professionally-guided detox regimens. You will be helping your liver, kidney, and digestive system to function at its best so that you can be your most energized self.

Stress is another factor when it comes to cancer risk. Chronic stress lowers immune function and leads to depression as well as a host of other diseases, including breast cancer. NOW as you enter perimenopause or menopause is the time for what life coach Cheryl Richardson calls “extreme self-care.” This means getting serious about embracing specific practices, such as meditation and yoga. These practices will help pull your system out of fight-or-flight mode and into a more peaceful state of mind.

We hope the ErSO turns out to be as safe and effective as this new research shows, but we’re especially happy to see new research that’s moving away from the “cut, burn, poison” method that has injured and killed so many cancer patients.

From 2013 to 2015, chemotherapy use in early-stage breast cancer declined by over 46%, going from 26% to just 14%. This is a step in the right direction! Hopefully, we’ll see more studies like the one out of University of Illinois in the future.

←
Previous
The COVID Cookie is Crumbling
→
Next
Eating With the Seasons: Top 10 Fall Foods