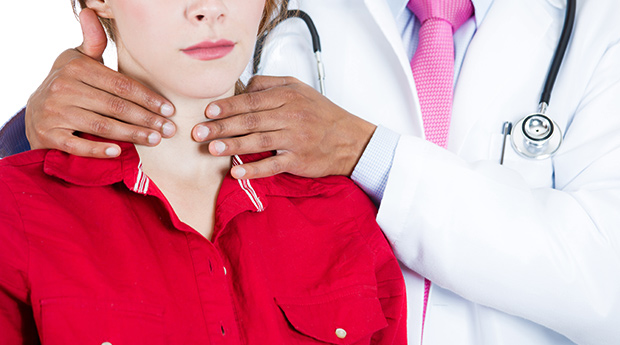 Today there are approximately 50 million Americans (mostly women) who have some form of autoimmune condition − where the immune system receives confusing signals and mistakenly attacks normal mechanisms in the body. One of the most common autoimmune conditions is called Hashimoto’s Thyroiditis. Also known as Chronic Lymphocytic Thyroiditis or Hashimoto’s Disease. Hashimoto’s can be a serious condition in and of itself and is the leading cause of hypothyroidism in general. But does having Hashimoto’s also raise the risk of developing certain kinds of cancers?

Before we dive into the specifics of Hashimoto’s Thyroiditis in particular, let’s first take a look at the links between autoimmune conditions in general and cancer. The connection can be seen in the very nature of the two conditions. Autoimmune disease occurs when “the body mistakenly turns on itself,” and cancer occurs when the body should be attacking itself (i.e. harmful pathogens within the body) but does not.

And indeed, several studies over the last decade have made the connection between a history of autoimmune conditions and higher cancer risk. A 1997 Chinese study discovered that autoimmune disease sufferers were twice as likely to get esophageal cancer. A study at Medical College of Wisconsin found that a history of systemic sclerosis equated to a five-fold risk of lung cancer, a three-fold risk of liver cancer, and a four-fold risk of nonmelanoma skin cancer.

In the United States, there are approximately 200,000 new cases of Hashimoto’s annually. With this condition, the immune system creates antibodies that attack the thyroid, blocking endocrine system hormones needed to coordinate many of the body’s functions. As a result, most individuals who have Hashimoto’s also have hypothyroidism. Thyroid hormones T3 and T4 can fluctuate with Hashimoto’s, resulting in periodic bouts of hyperthyroidism.

In most cases, Hashimoto’s is diagnosed through a blood panel which checks T3, T4, TSH (Thyroid Stimulating Hormone), and the presence of the thyroid peroxidase antibody. Those who have Hashimoto’s also tend to have a laundry list of symptoms, including fatigue, weight gain, sensitivity to cold, constipation, dry skin, hair loss, muscle aches, depression, and goiter. Sometimes individuals have several of these symptoms; sometimes they have only a few.

Does Hashimoto’s Increase the Risk of Thyroid Cancer?

The biggest cancer risk for those who have Hashimoto’s is for thyroid cancer, or Papillary Thyroid Carcinoma. A meta-analysis of 38 previous studies compiled by the Korea University Ansan Hospital and published in the European Journal of Endocrinology found that Hashimoto’s thyroiditis was “significantly associated” with this form of cancer.

In fact, as rates of Hashimoto’s disease and hypothyroidism continue to rise, thyroid cancer is also becoming the fasting-growing cancer in women, according to the American Thyroid Association.

Hashimoto’s and Cancer: Could Iodine Deficiency Be the Common Link?

Iodine deficiency can contribute to both cancer and hypothyroid conditions like Hashimoto’s. It is an especially important substance for those who are attempting to heal from thyroid conditions since it is the basic building block of T3 and T4 hormones. Dr. David Brownstein, one of the foremost practitioners of holistic medicine in the United States, set the record straight when it comes to the importance of this essential mineral in a The Truth about Cancer video interview.

“Iodine has a lot of jobs in the body,” said Brownstein. “The immune system can’t function without it. You can’t fight infections without it. But one of its main jobs is in the endocrine glands. The endocrine glands include the thyroid, the breasts, the ovaries, uterus, and the prostate. What are we having problems with out there? The thyroid, the ovaries, the uterus, breasts, and prostate…the fastest-growing cancer in the United States is thyroid cancer…”

The World Health Organization (WHO) announced in 2007, after completing a study of 41 countries, that “iodine deficiency is a global public health problem.” It is estimated that close to 74% of “healthy adults” are iodine deficient. Some experts estimate that iodine deficiency disorders, or IDD’s, affect between 800 million and 2 billion people worldwide. 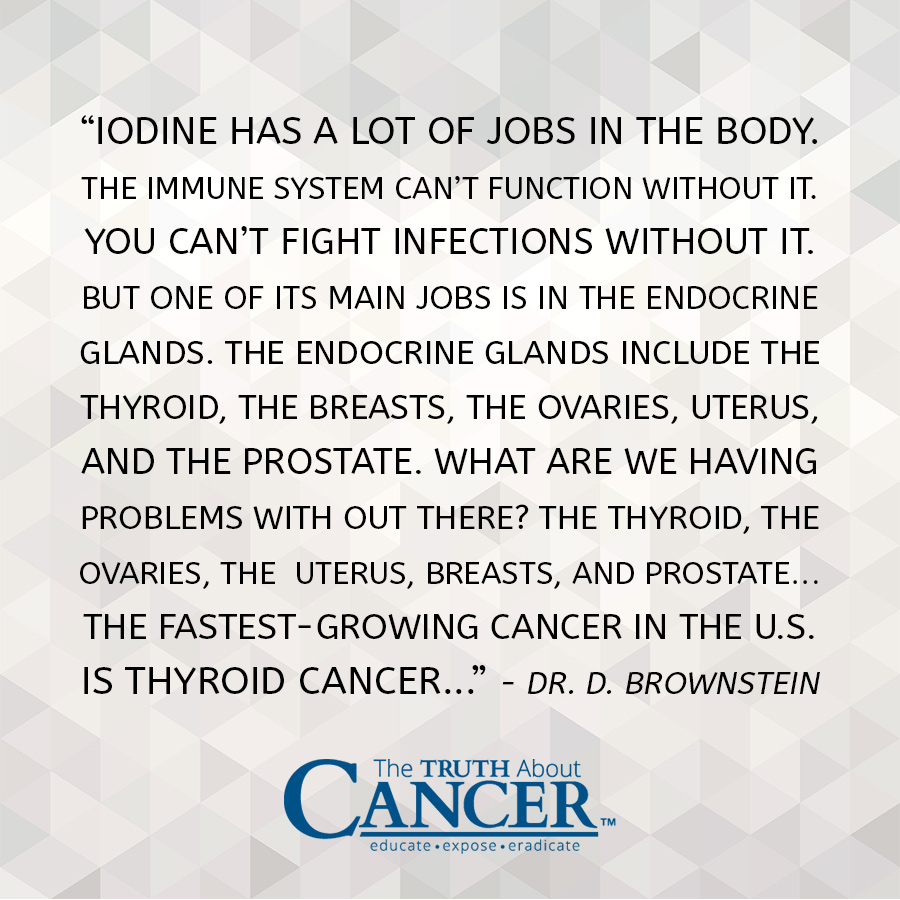 Why Are So Many People Deficient in Iodine?

So why are iodine levels so low worldwide? While it was once thought that the culprit was lower iodized salt intake in recent years, more and more evidence is pointing to environmental toxins which block the absorption of iodine in the body. Some of the main culprits are:

Fluoride: Fluoride was introduced into the United States drinking water supply in the early 1960’s. It is now a known fact that this highly-toxic substance blocks the absorption of iodine in the body − in addition to fluoride being extremely harmful to the neurological development of young children.

Bromide: Bromide can be found in many commercial swimming pool chemicals. Since it is a flame retardant, it is also seen in high amounts in external and interior paint as well as in plastics used in the interior of automobiles.

Perchlorate: This highly-toxic substance was first developed as rocket fuel and explosives. Now, however, it can be found in high amounts in groundwater across the U.S. (and is also used as a flavor-enhancer in certain foods).

Step One: Get Your Iodine Levels Checked!

If you have been diagnosed with Hashimoto’s or suspect that you may be suffering from hypothyroidism, in addition to getting a comprehensive thyroid panel (including TSH, T4 and T3 as well as Free T4), consider getting your iodine levels checked as well. There are also resources out there that allow you to test for excessive bromide and fluoride as well. The good news is that bromide can be easily flushed out of the body using a “salt-loading” protocol while iodine supplementation can gradually purge fluoride from the body.

If you find that you are iodine deficient and you also suffer from Hashimoto’s, consider supplementing with selenium as well. There are differing opinions as to the best protocol for iodine-selenium supplementation so be sure to work with a holistic practitioner to find what works for you.

One Final Word on Thyroid Medications

Unfortunately, the typical conventional “treatment” for Hashimoto’s Thyroiditisis the prescription of synthetic thyroid replacement medications, the most common of which is Synthroid (levothyroxine sodium). This pharmaceutical drug comes with its own list of side effects, the most dangerous of which is breast cancer. One study found that the risk of breast cancer rose by 200% in women who had used thyroid replacement drugs such as Synthroid for fifteen years or more.

The jury is still out as to what specifically causes such a radical spike in this kind of cancer in those who used thyroid replacement long-term. Many experts speculate that the common link, again, is iodine.

Utilizing thyroid replacement drugs without also supplementing with essential iodine will still leave the body depleted, leading to higher cancer risk. In addition, if you are considering thyroid replacement even for the short term, investigate natural desiccated thyroids (or NDTs) instead of synthetically-derived sources, which will just add to your overall toxic load. Some of most common NDTs are Armour, Nature-throid, and Westhroid.