You are here: Home / Cancer Treatments / A Better Model for How to Treat Cancer (video) 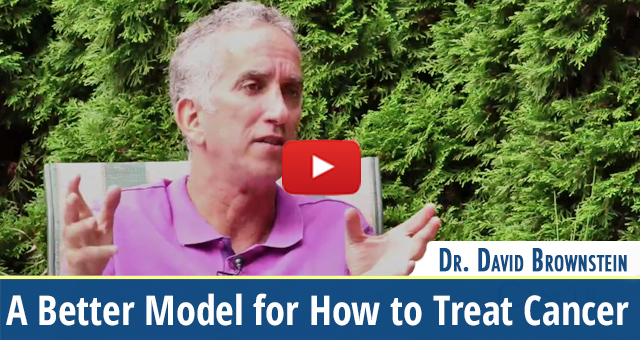 Video Transcript: A Better Model for How to Treat Cancer

Ty Bollinger: So, talk about the model that you use to treat cancer.

Dr. David Brownstein: Well, I sort of use the model I was taught in medical school. In medical school, I was taught to: 1) take a history and to listen to patients and to hear their complaints, 2) to do a good physical exam to correlate what their complaints are and try and figure out what the problem is, and 3) order laboratory tests to confirm or deny what you think might be going on and to guide you in a therapy.

I still follow that basic model, but what I do a little differently is, what I was taught in medical school was how to diagnose pathology. That was our first thing. So, we could recognize when there was a problem in your body and then what we were taught was how to prescribe that one drug to treat that problem.

That would be a great model if that drug actually treated that problem. But, for 98% of the drugs out there, they don’t treat
the problem. They just treat the symptom of the problem. We really need to go back to work to figure out what’s the underlying cause of these illnesses.

There’s a whole bunch of things going on and either we start to treat these underlying causes that are part of the underlying cause of the problem of cancer, or we’re just going to continue going on with so many people suffering from it.

Ty Bollinger: That’s a common thread that I’ve heard from many different medical doctors that I’ve interviewed, is that what distinguishes what they’re doing from the traditional model [of medicine] is they’re actually looking for the causes and not just treating the symptoms. You’re using the traditional model, but you’re getting to the bottom of what caused the problem.

Ty Bollinger: That makes sense. I’ve heard… I can’t remember who it was in this series. I think it may have been Mike Adams who said that, “Cancer is not a deficiency of chemotherapy.”

Dr. David Brownstein: I would amend Mike Adams’ statement… “Not a deficiency of chemotherapy, radiation, or toxic drugs to treat it.”

Ty Bollinger: So, you’re getting to the bottom. You mentioned several reasons: toxicities, bad nutrition, lack of iodine, dehydration. We’ll get into those in a minute, but could you go into the detection techniques that you use initially? Today, the typical detection for breast cancer is mammograms. If it’s prostate cancer, it’s PSA tests. What are you using to detect cancer?

Dr. David Brownstein: Let’s talk about breast cancer, since one in seven women have it. If we live in the United States, we’ve all been affected by this, either family members or friends. It’s hard to not know anybody that doesn’t have breast cancer or has died from breast cancer. In conventional medicine, women are supposed to go for their annual exams and annual mammograms.

And yes, mammograms can pick up breast cancer at an earlier stage than ever before. When you look at the mortality rate since 1930 from breast cancer, the age adjusted mortality rate hasn’t changed. So, yes, we’re picking up cancer at an earlier stage, but women are living about the same amount of time with breast cancer as they were living with it 50 years ago. Yet, here we are spending trillions of dollars with chemotherapy, radiation, and hormone modulating therapies, and they’re really not working well. 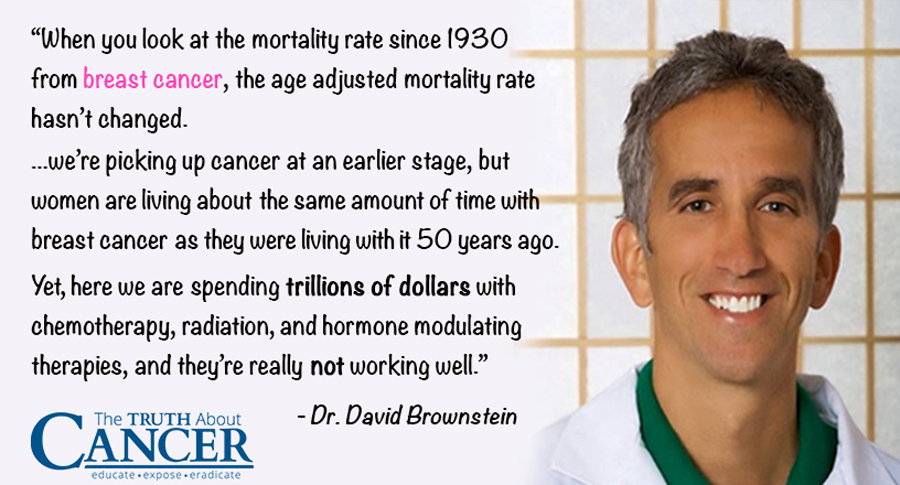 I think that definitely we need a better model for this. So, what do I suggest? I suggest 1) let’s go back to the basics. I think one of my jobs as a doctor is to counsel people on how to eat appropriately. I can guarantee you most people are not eating appropriately.

The standard American diet is nutrient-depleting for people. It supplies them with toxic chemicals that set the stage for chronic illness like cancer and arthritis and other illnesses to appear. Unless they learn to eat appropriately, or eat better, I think that we’re going to still suffer this cancer problem.