You are here: Home / Cancer Prevention / The Role of Hydrogen in Combating Oxidative Stress (video)

Video Transcript: The Role of Hydrogen in Combating Oxidative Stress

Ty Bollinger: What do hydrogen and oxidative stress have to do with each other? Paul Barattiero, an expert on molecular hydrogen and water, has been extensively studying the properties of water for quite a while. This includes different methods of filtering and structuring water to help individuals with cancer and diabetes increase blood pH, energy, and detoxification.

Charlene Bollinger: Listen to this video to learn more about the role of hydrogen in combating oxidative stress and how free hydrogen turns harmful free radicals into something beneficial.

Paul Barattiero: So, I appreciate being here. I am honored to be here. This is a different lecture. I have about 25 different lectures that I give depending on what kind of venue I’m at. And this one I developed specifically for The Truth About Cancer this year, with a very specific focus on cancer.

So, what they’re saying here is oxidative stress can lead to chronic inflammation, which in turn can mediate most chronic diseases including cancer, diabetes, pulmonary. All the different issues that we are struggling with today are all because of oxidative stress and inflammation.

Oxidative stress, as we already talked about, is defined as the imbalance in the body of radicals and counteracting effects from the antioxidant ability of our bodies alone. We have antioxidant abilities built into our function of our body. But when they don’t work effectively that’s when the problem occurs.

And what we need to understand is the culprit is reactive oxygen species (ROS). When we start to look at the body, we’re not talking significant things, huge things, they’re simple chemical reactions in the body that happen, as we just learned in Patrick Quillin’s talk, many, many times a second, but they are simple, simple chemistry when we begin to understand them.

In this situation, ROS is reactive oxygen species. So, they are oxygen related radicals. They are the most cytotoxic in our human body. They affect our cell function. That’s what’s stops our cells. Cytotoxic means cell damaging. So, imagine oxygen, the very thing that we need to breathe and live by, can cause tremendous issues in the body when it’s combined with something else that is very damaging to the body. 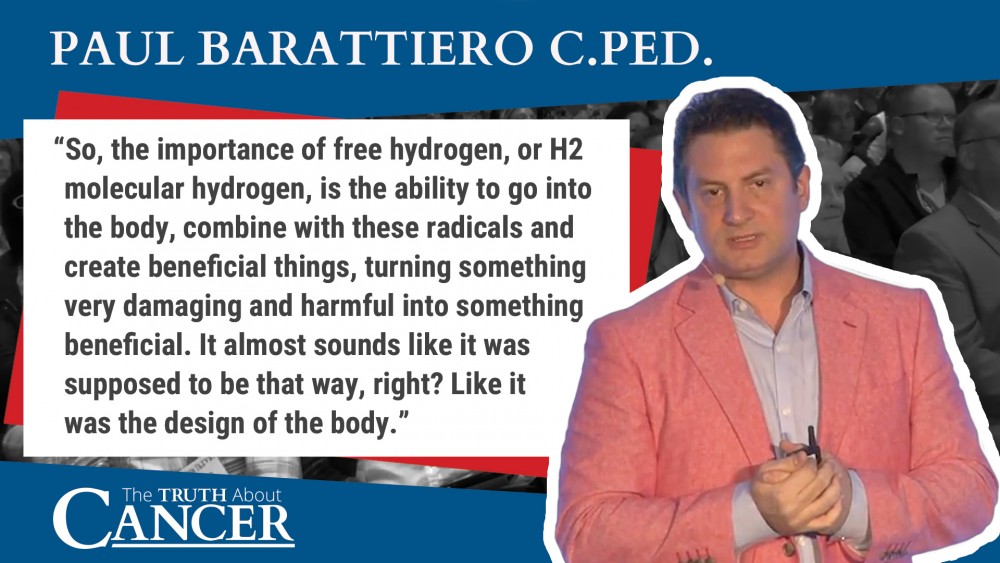 And when you look down here under number two, most reactive oxygen species are generated in the cells by mitochondrial respiratory chain. This simply means the respiratory process, the fact that we’re living, right? So, it’s nothing we’re doing wrong, and no one should think that. It’s a normal process of providing what?

ATP, or energy, in the body. That’s the mitochondrial function that we have. And in the respiratory chain, we end up with oxygen radicals. That’s what happens.

In this it says that hydrogen peroxide, superoxide anion, and hydrogen radicals are the three top reactive oxygen species that are very harmful to the body.

What happens if we give another hydrogen to that chemistry? Water. So, we just went from the most damaging free radical in our entire body to a water molecule. Isn’t that beautiful? And that’s what hydrogen does, and that’s what we’re talking about today. So, the topic is hydrogen and water, the importance of hydrogen water.

So, the importance of free hydrogen, or H2 molecular hydrogen, that we’re going to talk about, is the ability to go into the body, combine with these radicals and create beneficial things, turning something very damaging and harmful into something beneficial. It almost sounds like it was supposed to be that way, right? Like it was the design of the body.

It was the design of the body, we are a big hydrogen generator, okay? We have been designed and created. Our bodies, generate hydrogen on their own as long as they’re working correctly. This is where the story starts. Oxidative stress. When we have stress, we start to have system failure, and we no longer produce hydrogen, which then goes and reduces oxidative stress. It’s that process.

Now what was the biggest thing that we learned in Patrick Quillin’s lecture? Gut. How important is gut health? We hear about it a lot, but I don’t know that people really understand how critical gut health is. He said there was 70 trillion cells, but then he said 100 trillion just in the gut. Isn’t that interesting?

So how much of you is bacteria? You could argue most of you, you could argue your personality, if someone’s cranky, right? You could argue that there’s more issues with the bacteria in your body being wrong, or the cravings that you have are because of bacteria not because of what you really want to eat. So, it’s an interesting thought process.

Here we talk about the fact, at the bottom, understand a sustained environmental stress, “ROS are produced over a long time and thus significant damage may occur to cell structure, and functions may induce somatic mutations and neoplastic formations,” okay? Patrick Quillin just talked about neoplasms, didn’t he?

And what do we have down here? Indeed, “cancer initiation and progression has been linked to oxidative stress by increasing DNA mutations and inducing DNA damage, genome instability and self-proliferation.” This is where it starts.

Charlene Bollinger: Wow. Wasn’t that so good? Paul is just so great at helping us understand the importance of water and healthy water.

Ty Bollinger: That’s right, molecular hydrogen structured water. If you liked it, leave your comments below!

Stay informed and don’t miss a single article, interview, or video from The Truth About Cancer. Go here to be notified each week about new, cutting-edge information that impacts your health.