You are here: Home / Cancer Treatments / The Key to Recognizing & Destroying Cancer (video)

Ty Bollinger: Can you beat cancer with nutrition? Not according to many conventional cancer doctors. But our good friend Dr. Patrick Quillin thinks differently, and has years of experience working with cancer patients to back this up.

Charlene Bollinger: Make sure you stay tuned to hear Dr. Quillin’s story of two cancer patients with the same diagnosis of multiple myeloma. One lived only 18 months, while the other lived 14 years. Find out what they did differently.

Dr. Patrick Quillin: Let’s have a look at our slides, please. Green button. There we go. What we’re looking at here is “Beating Cancer with Nutrition.” We’re going to talk about [how] a well-nourished cancer patient can better manage the disease and its therapies. So, what I share with you is: Nutrition is not sole therapy against cancer. It is essential, but it’s not sufficient.

So, nutrition should be an important part of everybody’s integrative comprehensive cancer treatment. And a well-nourished, healthy human body is self-regulating and self-repairing. What you’ll see before we’re through here is that miracles are going on in your body every second, every day, and it’s your job to nourish them.

So, what are we going to do here? What’s our outline? “Losing the war on cancer.” We will spend very little time on that. We’ll talk about self-repairing mechanisms for cancer, major health vectors, nutrition in cancer treatment, foods to eat, supplements, and wrapping it up. That’s where we’re headed for the next few minutes.

So, what’s the big picture? Without your health, nothing else matters. That’s the big picture. We have Steve Jobs, co-founder of Apple; Glenn Frey, co-founder of the Eagles. Both of them incredibly talented people, both of them very wealthy, both died before their time. Both lost their health, and I guarantee you, they would have given every dime they had if they could have gotten their health back. If you don’t have your health, nothing else matters, and that’s what we’re here to talk about. 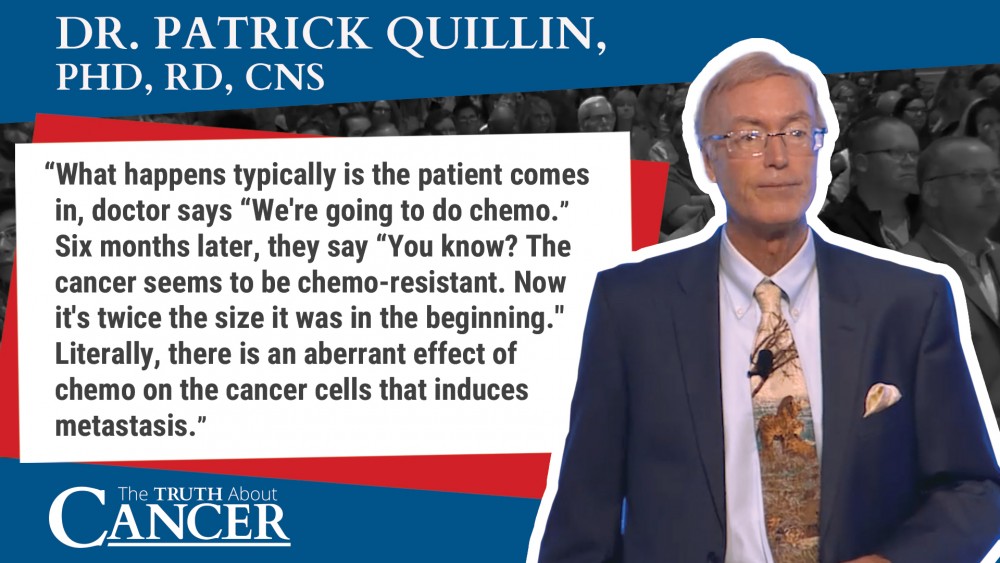 So, what is this healthcare boondoggle we have? We spend three trillion dollars a year on what we call healthcare. It’s actually “symptom management with dangerous drugs” is what it really is. And so, the healthcare system looks at trauma care, emergency room, or chronic care. Trauma care, we get an A+. If you’re in any big city hospital in the world, trauma care is brilliant.

The other day, I applied for some dance lessons, and on the form, it said “Who to call in case of an emergency.” And I wrote in “A very good doctor.” I don’t see how any of my family members are going to do me any good. So, trauma care is doing very well.

On the other hand, chronic care is not doing so well. Cancer, heart disease, diabetes, etcetera, we get somewhere between a C and an F, depending on how you rate it. Richard Nixon said that “We will have a cure for a major cancer by the bicentennial.” We don’t have one. Still don’t, 45 years later, 800 billion in research of your money, and two trillion in therapies, we’re not there.

Increasing incidence of cancer in the U.S. In the year 1900, five percent of Americans would develop cancer in their lifetime. Today, it’s 40%. We’re doing something wrong. And I could spend 45 minutes as an autopsy on the War on Cancer, but I won’t do that. I’m just going to give you a couple of slides.

The first one here is from Guy Faguet, who was a board-certified oncologist who spent his career at the National Cancer Institute, and when he retired, he wrote this book: The War on Cancer: Anatomy of Failure. This is from an insider. What he said is that chemotherapy is curative in about two percent of cancer. I think prayer does better than that. But wait, it gets worse. A recent study came out and they said “Actually, chemotherapy not only doesn’t cure the cancer, it probably causes metastasis of the cancer.”

What happens typically is the patient comes in, doctor says “We’re going to do chemo.” Three months later, everybody’s dancing in the streets. “Your cancer has shrunk by 50%. This is wonderful.” Six months later, they say “You know? The cancer seems to be chemo-resistant. Now it’s twice the size it was in the beginning.” And we know why. Literally, there is an aberrant effect of chemo on the cancer cells that induces metastasis.

A couple of patients, both were white males with multiple myeloma. The gentleman on the left, I worked with him extensively – diet, supplements, lifestyle. He went through some medical therapies. He lived 14 years, of which at least 13 years was excellent quality of life, which is well beyond the two years that’s expected with multiple myeloma.

The gentleman on the right, same thing, multiple myeloma. But his oncologist said, “If you do any of this nutrition stuff, then I won’t treat you.” And he died 18 months later, with his wife pregnant with twins.

Capitalizing on the abnormalities of cancer. This is where we’re going to win the War on Cancer. We know that the—we can exploit the differences between cancer and healthy cells. And you’re going to hear a lot more about this in the next three days. What we have is there’s a four-fold increase in glucose metabolism in cancer cells. We can starve the cells. We know that they generate lactic acid. We can change the pH. We know that they’re somewhat anaerobic, they’re more like hypoxic – they use less oxygen. We can oxygenate the tissue and then change things.

Here’s how we’re really going to win the War on Cancer, folks. There are extraordinary mechanisms inside of you that recognize cancer. Since the dawn of time, cancer has been with us. And what the War on Cancer has taught us is that the average adult has had about six bouts of cancer in a lifetime, and yet, your body recognizes and destroys those cancer cells for at least 60% of the population. And here’s how it does it.

And what the pathologists will tell us is that health deteriorates into anaplasia, metaplasia, dysplasia. These are all abnormal cells. Not good, but not ugly yet. Neoplasia is cancer and then metastasis. So, there’s 50 shades of gray in between health and full blown cancer, and there’s a deterioration going on, and there is a ball rolling downhill in which we have—these are the mechanisms built in to help your body prevent this deterioration from occurring. DNA repair, for instance, Vitamin D.

The experts told us to avoid the sun. Now we have epidemic proportions of vitamin D deficiency. Vitamin D regulates 20% of the human genome, and many other nutrients. Fish oil, selenium, folate, etcetera. We’re deficient in all of them.

Cell-to-cell communication. Vitamin A is involved in that.

Macrophage engulfing. Gobble up the cancer.

Apoptosis: Programmed cell death. Cancer cells forget to die. We can induce that with things like vitamin E succinate and ellagic acid.

Collagen encapsulation. If you can’t kill the thing, wrap it in a tough envelope. The body can do that.

These are just some of the many elegantly described mechanisms in the human body that have all been elucidated in the best universities on the planet, and we know they’re driven by diet. And so, we find that indole-3 carbinol, which is in cauliflower, broccoli, can reverse cervical epithelial neoplasia, the beginning of cervical cancer.

We know that vitamin E can reverse fibrocystic breast disease, folate and cervical dysplasia, vitamin A and oral leukoplakia, calcium and colonic crypts. And we could go on with a dozen more examples. The point is, what you put into your body changes these mechanisms that allow us to recognize and destroy cancer.

Ty Bollinger: Dr. Patrick Quillin, thank you so much. As you heard in his lecture, nutrition actually does have a huge impact on your overall health. We can reverse cancer in many instances with nutrition – with our food.