You are here: Home / Cancer Treatments / How to Resist Chemotherapy: A Step of Faith (Part 1)

Video Transcript: How to Resist Chemotherapy: A Step of Faith (Part 1)

Ty Bollinger: Many of you may have heard Chris Wark’s story of overcoming Stage 3c colon cancer, but what you may not know is how deceptive the cycle of chemotherapy created by Big Pharma really is. Looking back on how cancer has affected our own family, we share the same view that Chris does. It just doesn’t make sense to cure cancer with poison.

Charlene Bollinger: So, how are we supposed to fight and speak up for what we really feel is right when conventional medicine has deemed chemotherapy as the preferred option. Join Chris as he reveals how he found the courage and strength to go against the current and resist chemotherapy.

Chris Wark: So, I was diagnosed with Stage 3 colon cancer when I was 26. Most of you know this. I had pain, right? I had pain, and I ignored it. I thought I had an ulcer, thought it would heal. I’d never had any other problems in my life. But it got worse. And by the end of 2003, the pain had just gotten to the point where I was like “Oh, I guess I’ve got to go to a doctor and see what’s going on.” Right?

And I was misdiagnosed. They thought I had an ulcer. Eventually, I did a colonoscopy, and they found a golf-ball size tumor in my large intestine. And like many of you in the room, right, it’s like “What? Tumor? No. Cancer. This can’t be right. This cannot be my colon. Are you sure you’re looking at my colon? Are you sure you didn’t mix my colon up with the 80-year-old guy in the next little cubie or whatever?” No, it was my colon.

So, they rushed me into surgery. They basically told me what they tell everybody. “You’ve got cancer, and we’ve got to get you into surgery right away and cut this thing out before it spreads and kills you.” They use fear to motivate you to take immediate action. It’s always urgency, right? Urgency gets people on the chemo train, it gets them on the conventional train. And once you get on that train, it’s really hard to get off.

And the truth is, most cancer patients have plenty of time. Most of them don’t even feel sick when they’re diagnosed, okay? And yet, this cancer’s been growing in their body for many years, the doctors tell you…8 years…10 years. But now you’ve got to take immediate action because it’s urgent.

So, I was told that, and I believed it. I was like “Okay, I’ll do whatever you say.” And they got me into surgery, they cut out a third of my large intestine; they took out this tumor. They realized that it was worse than they thought, Stage 3C. It had spread to some lymph nodes. They took those out. And they said, “We got it all.” Anybody heard that one? Yeah? Right? “We got it all. But, you need 9-12 months of chemotherapy. But we got it all.”

The truth is, what we know now is that cancer is metastatic from almost the very first early stages of development. So, before it’s even big enough to detect, cells have left the primary tumor site, the primary lesion, and are already in other parts of your body. So, Stage 1 is really a misnomer, right? Stage 1 doesn’t really exist. You’re metastatic when cancer starts growing. Now your immune system is mopping those things up. Your immune system is designed to keep you well. And yet, you have this issue. You have a problem in your body if you have a tumor.

So, that’s why they told me to do chemotherapy, because they also probably knew, at that time, that colon cancer is the second leading cause of cancer death in the U.S. If surgery, chemo, radiation, oil pulling were curing colon cancer, it wouldn’t be the second leading cause of cancer death, would it? Okay? I didn’t know any of that stuff. But they told me I needed to do 9-12 months of chemotherapy.

But I was thinking about my life and my future, and the idea of poisoning my way back to health did not make sense to me. Right? I knew very little about chemotherapy. I never had anyone close to me go through cancer. But I had an instinctive resistance to something that was so toxic and poisonous that it makes you sick and your hair falls out.

I’d seen cancer patients in the world, right? I’d seen them at the mall or somewhere and thought, man, I just couldn’t even imagine what they were going through and what that was like. And it was scary, right? I was scared of the thought of me becoming what I had seen. And especially there was a man at church that I saw a few times, and he was in late stages, and he was emaciated, of course no hair, his skin was yellow, and he had to wear a mask in public because his immune system had been destroyed. 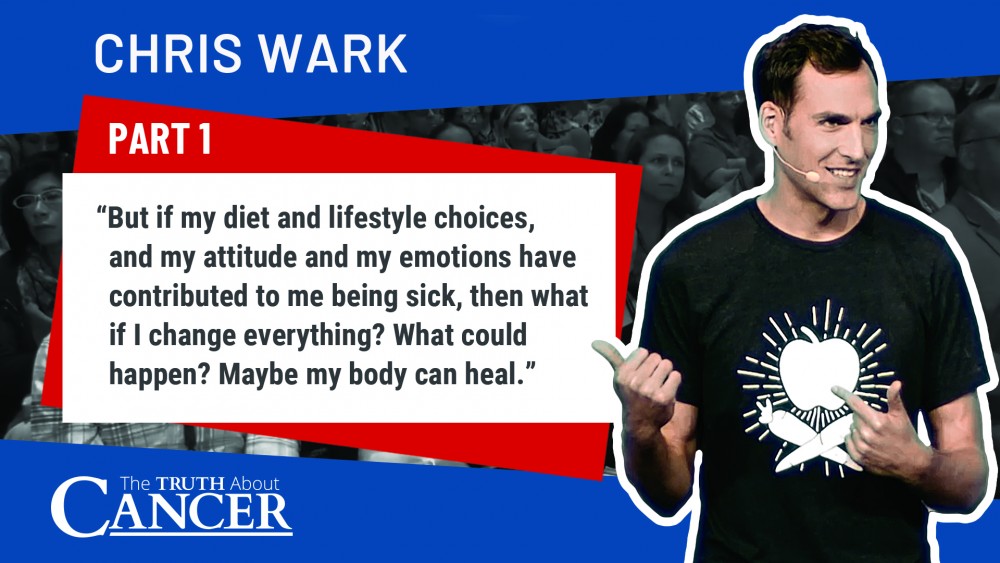 And so, I prayed and asked for some guidance. Two days later, I got a book that arrived on my doorstep that was sent to me from a man in Alaska, who knew my dad. And my dad had told him I was diagnosed with cancer, and he was like “Well I need to send him this book.”

And he sent me a book that was called God’s Way to Ultimate Health, written by George Malkmus. And I started reading this book and I learned that George had had colon cancer and he was a pastor, and he’d seen a lot of church members and friends and his own mother suffer and die through cancer treatment.

And I’m reading his story, and I mean tears are coming down my face. And I knew this was an answer to my prayer. It wasn’t the answer I expected, but I knew this was the answer for me. And I made a decision immediately overnight to change my whole life. It was just right there on the couch in my tiny little house, and I was like “I’m going to do it. I’m going to change my whole life.” I actually got excited about the idea that maybe cancer was my fault. That was actually good news to me. Do you understand what I mean?

That was good news. It wasn’t bad news. I was like “Wait a minute. Maybe this is my fault. And if this is my fault, if I contributed to this disease by the choices I’ve made, yes, I didn’t know any better. But if my diet and lifestyle choices, and my attitude and my emotions have contributed to me being sick, then what if I change everything? What could happen? Maybe my body can heal.”

Charlene Bollinger: We hope you learned a lot from this video. If you learned something new, please take a few seconds now to let us know in the comments section below.

Big Pharma and mainstream medicine say they’re searching for the cure to cancer. But what if the cure has already been discovered? Click here to see how pioneering men and women are curing cancer right now.

Chris Wark is an author, speaker and health coach. Chris was diagnosed with stage 3 colon cancer in 2003 at 26 years old. He had surgery, but instead of chemotherapy used nutrition and natural therapies to heal himself. Chris has lectured at smoothie bars, health and wellness events, hospitals, churches, culinary schools, Whole Foods Market and more. Chris has made many appearances on radio and television including The Ricki Lake Show and The Lisa Oz Show and inspires countless people to take control of their health and reverse disease with a radical transformation of diet and lifestyle.