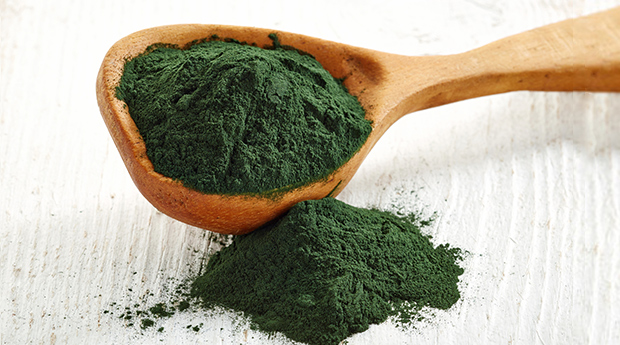 I am constantly amazed at all the natural substances the Creator provides that not only help the body in general but also specifically target cancer cell healing. Spirulina, a blue-green algae that grows primarily in tropical and subtropical lakes, is one such substance. It has been used since ancient times as a protein-packed superfood and source of instant nutrition. Researchers have also discovered specific ways that Spirulina algae can help reduce the risk of many kinds of cancer and, in some cases, heal it.

Breast cancer affects close to 3 million women in the United States and is second only to lung cancer as the #1 cause of cancer death. The problem, especially when it comes to traditional breast cancer therapies, comes through metastasis. Metastasis happens because drug therapies do not address the presence of cancer stem cells. These stem cells will continue to grow and generate new tumors long after the therapy has been concluded (and even after many doctors announce a cancer as “cured”).

While chemo drugs apply a “carte blanche” approach, certain natural substances have mechanisms within them that specifically target cancer cells while leaving healthy cells alone. Furthermore, some superstar phytonutrients target cancer stem cells in particular, eliminating tumors while healing cancer at the very foundation. One such substance is Spirulina.

Spirulina algae contains phycocyanin, a green-blue pigment that is made up of protein molecules. Phycocyanin is what gives Spirulina its characteristic color and helps in the conversion of sunlight to energy through chlorophyll in a plant. Phycocyanin is also a highly-effective antioxidant and anti-inflammatory while the chlorophyll that it works with to obtain energy has been known to bind to carcinogens.

In 2013, a ground-breaking study conducted by the Louisiana State University Health Sciences Center gathered a handful of “phytonutrient superfoods” together into what they hoped would be a “cancer-healing cocktail.” In addition to Phycocyanin-containing Spirulina, other phytonutrients in the mix included curcumin from turmeric, Isoflavone from soybeans, Indo-3-Carbinol from cruciferous plants, Resveratrol from grapes, and Quercetin, found in certain fruits.

When it comes to breast cancer prevention and healing in particular, melatonin is vital. Melatonin, which is produced while we sleep, has a direct effect on estrogen levels in several ways. It protects from estrogen overdose and directly suppresses breast cancer cell growth by literally putting the cells to sleep. David E. Blask, PhD, of Tulane University in New Orleans is an expert in cancer biology. He demonstrated that 90% of human breast cancers have specific receptors for nighttime melatonin anticancer signaling.

Heavy metal accumulation occurs through environmental exposure, the use of commercial personal products such as antiperspirants, metals in foods and pesticides, and from amalgam dental fillings. Studies have shown that heavy metal accumulation, especially of mercury, lead, cadmium, and arsenic, can also lead directly to cancer.

Heavy metals also contribute to a host of other bodily and especially neurological effects. Spirulina algae acts as chelator by binding with heavy metals in order to detoxify them from the body.  It contains high levels of vitamin C, vitamin E, phycocyanobilin (mentioned earlier), and beta-carotene, all of which help with oxidative stress and heavy metal chelation.

#4 – Spirulina Helps Heal the Gut and Boosts the Immune System

You may have heard that up to 80% of our immune system resides in the gut. For the immune system to do its job at fighting dis-eases like  cancer, the digestive system has to be functioning in an optimum way. This  includes the proper balance of beneficial gut flora. Several studies done with animal models have shown that Spirulina has an antimicrobial effect, especially against overgrowths of candida, and that it also promotes the growth of healthy gut flora. Spirulina can also help with strictly-digestive system related issues such as leaky gut.

Here are some other ways that Spirulina supports the Immune System: 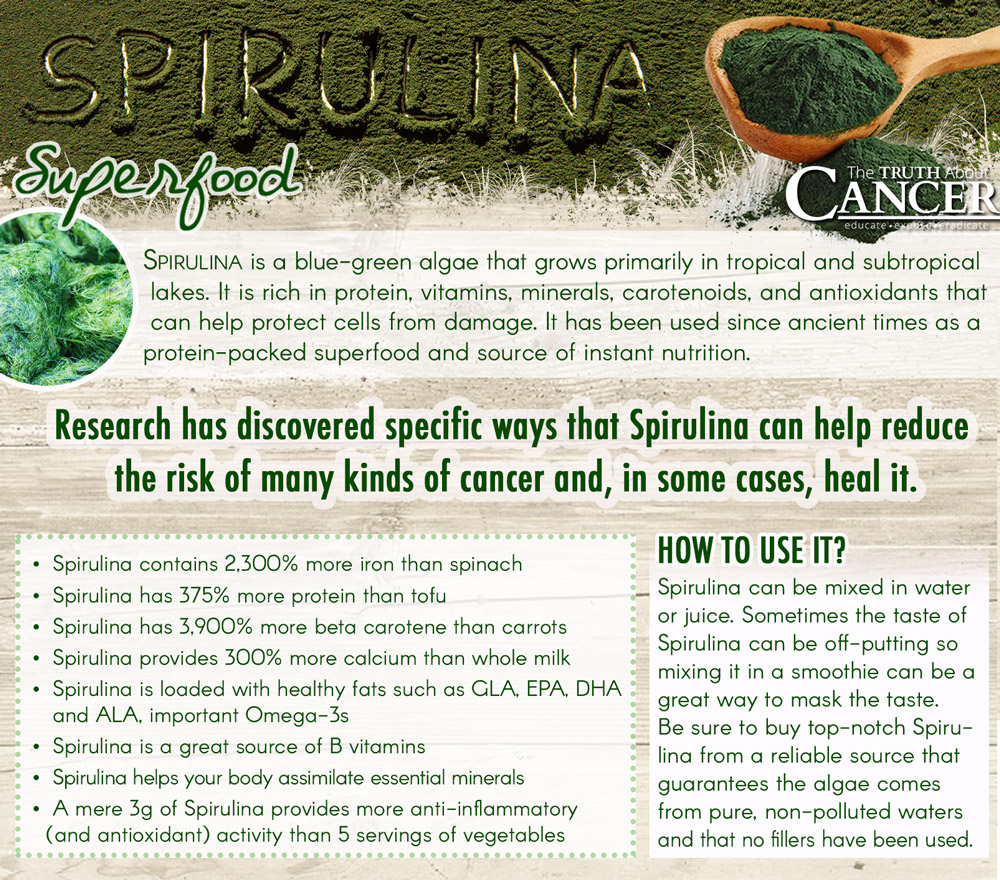 How Do You Consume Spirulina Algae?

Spirulina can be mixed in water or juice. Sometimes the taste of Spirulina can be off-putting so mixing it in a smoothie can be a great way to mask the taste. Remember also that Spirulina is not only a super-source of protein, vitamins, and minerals, but a very potent detoxifier as well.

Be sure to start with a small amount and slowly increase over time. For cancer prevention and overall health, most health experts recommend 3-5 grams a day (roughly one teaspoon). In addition, a 2016 Chinese study found that a mere 0.5 mg of Spirulina had an effect on monkey kidney cancer cells.

A 2014 study by Charles University in Prague found that a little under 0.20 grams had an effect on human pancreatic cancer cells. If you are considering using Spirulina as part of an overall cancer-healing protocol, be sure to work directly with a qualified health professional.

The most important thing to consider when purchasing Spirulina is purity, as some lesser-quality commercial brands have been found to contain contaminants. Be sure to buy top-notch Spirulina from a reliable source that guarantees the algae comes from pure, non-polluted waters and that no fillers have been used.

Finally, for those who have digestive issues, consider fermented Spirulina, which can be absorbed with more ease.