You are here: Home / Cancer Treatments / Is Belief the Most Important Part of Cancer Recovery? (video) 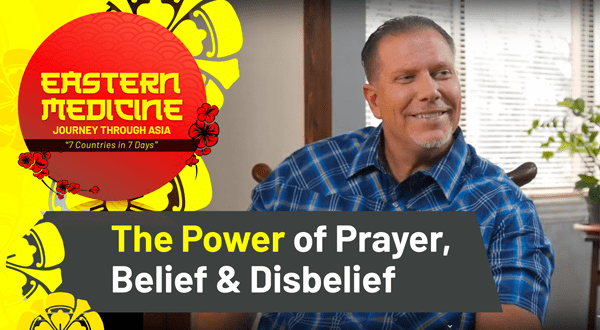 Video Transcript: Is Belief the Most Important Part of Cancer Recovery?

Charlene Bollinger: Before we go, we wanted to share a few encouraging quotes from the Philippines, and the first one addresses the topic of prayer, belief, and disbelief.

Dr. Homer Lim, MD: One of the things people don’t—our doctors don’t realize you also have to see how the patient’s feel about their treatments. If they don’t feel it’s not going to work, move to something else, because the power of saying this might not work, you’re actually negating the treatment itself.

Ty Bollinger: So, in other words, you need to harness the power of the placebo effect.

Ty Bollinger: Even though maybe you’re not using placebos, but at the placebo effect is something working because somebody believes it will work. Yes, you have to make sure that the patient believes that that treatment will work.

Dr. Homer Lim, MD: Yes. I mean not only believe not just believe but they trust that it will help them. It’s just like if you go to church, you have to pray. It’s been proven that prayer actually can help heal people. Not only pray for yourself, praying for others can actually heal other people. There’s studies there, it’s called intercessory prayer. If you look at that, it will show you how fantastic prayers, meditation helps, not only for you, but for those whom you pray for.

Dr. Jaime E. Dy-Liacco, DNM: When you are told you have cancer, my God, you get so scared, you’ll panic. Why do we get so scared? Why do we panic? Because we know the doctors don’t know how to cure cancer. If they knew, nobody would get scared.

Ingrid Gamboa: When I was first diagnosed, it gripped me with fear. And when I talked to Dr. Dy-Liacco, he would say Kelley said that cancer is not a death sentence, and in the back of my head, I’d always think it’s easy for you to say, because it’s—you’re not the patient. But I’m so glad that after doing the treatment, I’ve come to that point that I can really say that cancer is not a death sentence, and there are ways, there are other alternatives to conventional medicine that can work and work better for the patients.

Ty Bollinger: Your perspective, being positive is very important. Is it not?

Dr. Susan M. Balingit, MD: Yes, and you know a lot of positive articulation of what’s happening has to be done. So that people would see things half full rather than half empty.

Ty Bollinger: A glass should always be half full right?

Patient: Well, you’re healthy. What more can you ask? You see? There are so many people younger than my age who have lots of money, but they’re dead. I have no money, but I’m still alive, and I’m you know, I can appreciate what’s going on around me. So that’s it. Now I’m here. And you know, I’m kicking alive.

Anabelle Romblon: Yes, indeed hope. With this kind of treatment, yes, there is, especially if you have that spirit that that you will be healed, there is no—it’s not a death sentence.

Ty Bollinger: Alright, that’s it for Manila, Philippines were about to catch a plane for Singapore. So we will see you there in the next episode. In the meantime, God bless.