You are here: Home / Cancer Treatments / How to Resist Chemotherapy: A Step of Faith (Part 3)

Video Transcript: How to Resist Chemotherapy: A Step of Faith (Part 3)

Ty Bollinger: Hello everyone. We’re back again. Ty & Charlene here. Did you see Parts 1 & 2 from Chris Wark’s lecture at TTAC LIVE in Orlando? Well, here’s the 3rd and final part.

Charlene Bollinger: Many of us know that a big part of beating cancer is diet and nutrition but Chris is here to remind everyone of a third element that is often overlooked: faith. Keep watching for an uplifting ending to his story.

Chris Wark: So, I had two paths before me. I had the conventional path and I had this other path. And I was thinking about my situation, and the conventional path was the wide, paved road, brightly lit with everybody cheering me on. Right? And you go down that road and get on the chemo train, state of the art, high tech, reclining seats, so comfortable in there.

Those chairs are so comfy. You get a cup holder for your Diet Coke. They bring you little snacks and goodies, little treats. They go “You want a little ice cream sandwich with your chemo?” And as soon as that train starts, the suffering starts. Right? And who knows what happens at the end of the line? Are they going to drop you off better? Are they going to drop you off worse? Are they going to kick you off because they can’t do anything else and send you home to die? That’s kind of scary. It’s kind of scary, and that’s where everybody’s going. Everybody’s going that way.

And then the other path is the path into the jungle that I have to hack my way through alone. Right? Alone. Do not enter.

Miracles happen. But fear will keep you from doing that. And let me tell you something. A lot of people have said to me over the years like “Wow, that was so brave,” and “That was so courageous. How were you able to be so courageous at that time?” And the answer is, courage feels exactly like fear. Nobody ever feels brave. Bravery is not a feeling. It’s not. Neither is courage. Fear is the feeling, right? Courage is the decision to move forward in spite of fear. 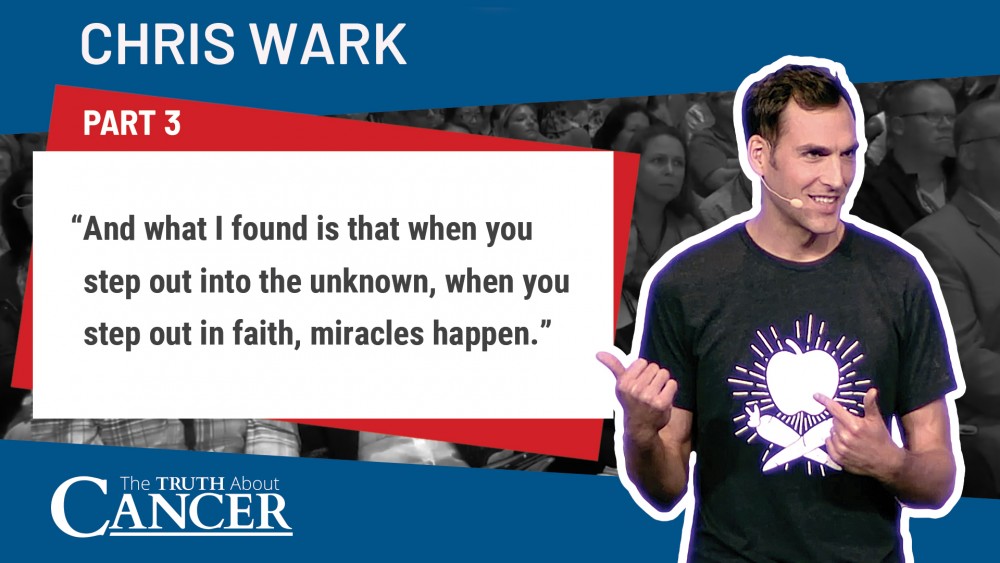 I was at a cancer clinic visiting patients, and I was there for a few days. And it was a small clinic, and I’d talked to all the patients there except for one. And she was really sick, and she had stomach cancer. And she had never come out of her room. But her husband was there. And I was talking with him on the couch outside her—near her room or whatever. And we were just talking.

Then a few minutes later, after we just, whatever, had finished talking, he went back to his room. And his wife was in bed, and she said, “Is Chris Wark outside our room?” And he said “How’d you know that?” He’s like “Yeah, he’s here.” And she said “I recognized his voice.”

And so, he came out and told me. And I turned around, she was in the room, she was in her bed, and she was looking at me. And I said, “Do you want to talk?”

And she’s like “Yeah.” So, I’m trying to get through this.

So, she comes out and we start talking. And one of the first things I said to her—I just felt like I needed to ask her this. I said “Who do you need to forgive?” And she just burst into tears. I mean she was crying so hard, snot was just coming out of everywhere.

And it was a beautiful mess. It was a beautiful mess. And I said “Listen. Let’s (she didn’t even tell me who it was) forgive this person right now. Let’s just do this right now.” And I just prayed with her; just led her in a simple prayer of forgiveness. And she said, “Can I pray in Korean?” I said “Yeah, of course. Yes.” And we prayed together, and it was just really sweet.

And she went back to her room and was exhausted. Went back to bed. And when she—a few hours later that evening, her husband—and by the way, she was bent over, right? She was a young woman. She was bent over because of the pain. When she came out, she was just bent over. And her husband came out and he said, “Man, she just woke up and she got up and went to the bathroom. She stood straight up.”

She stood straight up.

And he said she hasn’t done that in weeks. And I left the next morning. I didn’t get to see her again. And she sent me a message the next day on Facebook, and it was a long one. But the part of it I want to share with you was she said, “You taught me, you showed me how to release my pain.” Right? She released this pain, forgiving. And she stood up, right? It’s powerful.

Listen. There are people in your life, there’s someone in your life, you’ve got to—you need to forgive every person who’s ever hurt you. But we don’t have time for that. We’re going to pick the number one. And you can do the rest at home, or on the way home hopefully. But I just want you to do this. Will you close your eyes real quick? Just close your eyes. I just want you to put this person in your mind. I want you to think of this person who’s hurt you. I want to think of what they’ve done to hurt you, why they’ve hurt you. And I just want you to say, “I forgive you. I’m letting you go.” Alright? “I’m not going to hold this against you anymore.” Alright?

Now you can open your eyes. This choice, this decision that you’ve made to forgive, it’s a choice for life. Okay? It’s a choice you make for life. Forgiveness is like a healthy diet. If you eat healthy for breakfast and McDonald’s for lunch, what good did it do? It didn’t do any good.

A healthy diet only works if you stick with it, and forgiveness is the same way. You have to stick with it. Right? If you make a decision, you let it go, and you stay with it. Right? For life. Because I promise you, letting the weight of that bitterness and resentment and unforgiveness, let it off your shoulders, just drop it. Drop it. Because it’s holding you down. It’s pulling you down underwater, and it will drown you.

And that’s all you have to do. That’s all forgiveness is. It’s just a choice. And you know what happens? When you make that decision that you just did right now, God changes your heart. That’s what I see happening.

The most powerful thing you can do is after you make a decision to forgive, is just say “God—bless them. Bless this person. Bless their family, their business, their pets, whatever it is. Bless them.” When you pray for God to bless the people that have hurt you, I’m telling you, healing happens in your heart in a way that just doesn’t happen any other way. And it’s the most powerful thing you can do. And I can’t sell it to you. All I can do is give it to you. Right? It costs nothing, and it can change everything. That’s how powerful forgiveness is.

Charlene Bollinger: Wow! Thank you Chris for sharing about your faith in Jesus. We hope you learned from this video.

Ty Bollinger: Yeah we sure do. And if you did, please share it on your social media and let your friends and your family know about The Truth About Cancer. God bless.

Discover little-known natural therapies, treatments, and protocols to heal and prevent cancer from 40 of the world’s leading cancer experts.

Go here to find out more.

Chris Wark is an author, speaker and health coach. Chris was diagnosed with stage 3 colon cancer in 2003 at 26 years old. He had surgery, but instead of chemotherapy used nutrition and natural therapies to heal himself. Chris has lectured at smoothie bars, health and wellness events, hospitals, churches, culinary schools, Whole Foods Market and more. Chris has made many appearances on radio and television including The Ricki Lake Show and The Lisa Oz Show and inspires countless people to take control of their health and reverse disease with a radical transformation of diet and lifestyle.