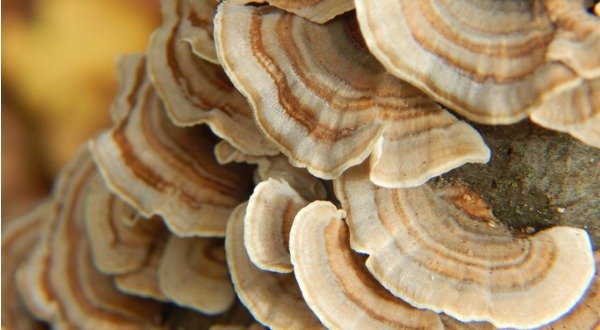 PSK has been proven time and again to effectively combat cancer. So why won’t the U.S. Federal Drug Administration (FDA) approve its use in the United States? How much evidence does the FDA need to approve a drug that has been used successfully for decades? It boggles the mind how the traditional medical establishment can continue to turn a blind eye to proven natural modalities for cancer.

Big Pharma is a $300 billion dollar a year industry. The prioritization of cash over consumers is the only way to explain why the substance Polysaccharide K (PSK) still remains a little-known natural substance relegated to the back shelves of your local health food store.

What the Japanese Have Known for Decades: Turkey Tail Mushrooms Fight Cancer

Polysaccharide K, also known as PSK or by the trade name Krestin™, comes from the mycelium varieties Trametes versicolor (also known as Coriolus versicolor or turkey tail mushroom). PSK has been used in traditional Chinese medicine for thousands of years under the name Yun Zhi. In the 1980s, the Japanese government approved PSK as a treatment for several types of cancer. By 1984, it was 19th on the global list of the “most commercially successful drugs” (with annual sales around $255 million). In Japan, turkey tail extract also goes by the name Kawaratake.

Today PSK is available for use for cancer patients in Japan. In that country, it is commonly prescribed as a cancer treatment, sometimes in conjunction with more traditional methods such as chemotherapy, surgery, and radiation. In fact, for the Japanese, turkey tail mushroom extract is one of the most widely-used and well-known medicines for cancer. The global research community has studied Polysaccharide K for years, with hundreds of published studies to show for it.

In the United States, Polysaccharide K is still considered an “alternative” nutritional supplement, with limited availability to consumers. In 2012, however, the United States did allow the first clinical trial of turkey tail extract in combination with chemotherapy drugs to see how the combination effects women with breast cancer. The trial was sponsored by the National Institutes of Health (NIH), with other studies set to follow.

Of the hundreds of studies conducted worldwide on Polysaccharide K’s effects on everything from pulmonary disease to digestive tract disturbances to cancer, one of the latest was a 2015 “systematic review” of PSK’s effectiveness and safety on lung cancer. The review, sponsored in part by the University of Toronto and the Canada Ottawa Hospital Research Institute, analyzed results from 28 other studies.

The review also concluded that survival rates for lung cancer patients were much improved at the 1, 2, and 5 year mark with ongoing use of PSK. Health factors that led researchers to this conclusion were: immune system function, blood function, weight, and cancer-related fatigue levels.

In general, the majority of the studies under scrutiny concluded that PSK can extend survival rates of lung cancer patients. This even included those who are also undergoing radiation and chemotherapy treatments.

Prior to the massive Canadian review, which was published in the journal Integrative Cancer Therapies, other studies had come to the same conclusion. In 2012, the FDA approved a clinical trial to test the healing properties of Trametes versicolor on Stage IV breast cancer patients.

The study is being conducted in part by Bastyr University in Washington state. As of 2014 reports, researchers claim that turkey tail extract was restoring immune system function for all the women who had gone through radiation therapy. They also found that PSK supplementation was increasing the number and effectiveness of “natural killer” (NK) cells as well as other cytotoxic T-cells.

NK cells are especially important for cancer healing, since it is their job to hunt out tumor cells and destroy them. The researchers also found that the higher the dosage given, the higher the number of cancer-fighting T-cells seen in the women’s immune systems after four weeks of use. There were no noticeable negative side effects of the treatment.

“Shrinking a cancerous tumor may offer temporary relief…but it will not offer a long-term cure if the cancer stem cells are not eliminated,” say researchers at Stanford School of Medicine.

This is, in fact, one of the main reasons why (besides how detrimental it is to the immune system) traditional cancer therapies often do not prevent a cancer from returning months or even years later. According to 14-year-long study published in the Journal of Clinical Oncology, the overall 5-year survival rate for cancer patients who utilize cytotoxic chemotherapy alone is only 2.1%.

Healthy stem cells are needed for the health and well-being of every part of the body’s functions. They can be viewed as “blank slates” that have the ability to turn into many different kinds of cells, such as an organ tissue cell or a brain cell.

Cancer stem cells, on the other hand, are found within tumors (or in the blood for cancers such as leukemia). They also possess the characteristic ability to change form. However, they give rise to different forms of cancer cells and are major contributors to cancer metastasis.

Turkey tail mushrooms may have the ability to destroy cancer stem cells as well. A study conducted in 2011 by the Queensland University of Technology in Australia found that the substances polysaccharopeptide (PSP), extracted from turkey tail mushroom, appeared to target prostate cancer stem cells in mice. Study organizers said that the compound was “100% effective in suppressing prostate tumor development.” The Bastyr University researchers mentioned above have also seen similar results with breast cancer stem cells.

Will FDA Approval for PSK Become a Reality Someday?

Despite the ongoing success of study after study when it comes to PSK, gaining U.S. FDA approval for PSK as a cancer treatment may be difficult in the long run.

“The FDA wants to know what the ‘mechanism of action’ is,” says Bastyr University’s Masa Sasagawa, ND, one of the lead researchers with the university’s ongoing breast cancer trial. “But it’s very difficult to determine, because turkey tail is a natural product and not a single compound.”

Unlike a synthetic drug, mushrooms contain thousands of elements. Each of these elements may have a potential effect on the immune system—and the combined effect of how they all work together will have an effect on healing as well.