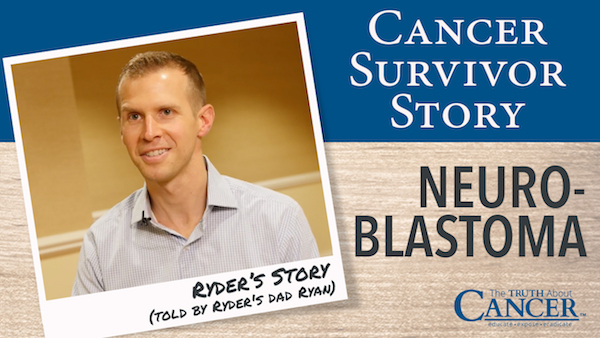 In this week’s Survivor Story, Ryan Sternagel shares about his son Ryder’s cancer journey. In May of 2014, about a month before Ryder’s first birthday, Ryder’s mom Teddy noticed a lump in Ryder’s back next to his spine. Their concerns were initially dismissed by their doctor, but as they were researching online, many sites led them to neuroblastoma – a childhood cancer of the nervous system.

After an ultrasound which led to an MRI, the doctor and nurse came out with tears in their eyes. It turned out that the lump Ryan and Teddy felt was just the tip of the iceberg. The tumor inside of and growing out of Ryder’s spine was larger than his kidneys. There were also two additional tumors that had metastasized in his bones.

From day one, Ryan and Teddy chose to implement as many natural options as possible along with the conventional cancer treatments. The original Quest for the Cures came out two weeks after they received their son’s diagnosis and Ryan attributes much of their initial success with finding answers to having watched this docuseries.

Ryan and Teddy constantly researched and used many alternative cancer treatment modalities including juicing and infrared sauna. By the second scan, Ryder’s secondary tumors were gone and the primary tumor was reduced beyond expectation.

Today, the secondary tumors are still gone and the larger tumor is about 5% of what it was and has been flatlined for about a year and a half now.

Click on the video above to hear more about Ryder’s cancer experience, including his parent’s continued efforts to inspire other children and provide information to parent’s going through a similar experience.

So, if you have a personal story to share of your triumph over cancer, please click here and tell us all about it. ?

←
Previous
Do You Think You “Eat Healthy”? (video)
→
Next
Is Your Body on Toxic Overload?: 4 Signs You Need to Detox