You are here: Home / Cancer Treatments / The “Intelligence” of Cancer Cells (video) 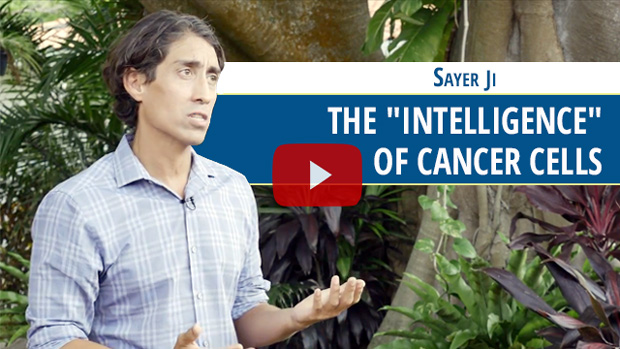 Ty Bollinger: So Sayer, let’s take a step back here real quickly and just get in to the basics. What exactly is cancer?

Sayer Ji: It’s a great question because until we, obviously, answer that correctly we can treat it. And so understanding cancer has been an on-going pursuit. For at least 50 years, the dominant view is called the mutational theory which is through happenstance, something goes wrong in the nucleus of the cell that causes it to get deranged, go rogue, and just want to replicate clonally into this tissue that invades everything.

But that view has been completely disproven because they identified that cancer is actually rather intelligent. It’s capable of invading the immune system by changing the structures on its surface like something out of The Matrix. It can go and produce its own enzyme supply that dissolve through tissues, produce its own blood supply.

It has a hierarchical arrangement of cells which have their own little duties and little village, so to speak. There’s a root cell, a cancer cell called the cancer stem cell, which we talked about—the mother behind it all. And so the view that cancer is just rogue terrorists in our body has justified using literally “weapons of mass destruction.”

Things like chemotherapy which came from the war theater, actual chemical weapons-grade material being administered to patients as well as radiation which is called from nuclear reactors might as well be culled from nuclear munitions to try to just destroy the terrorist within the body and not think about what it does to all the civilian population. It’s the same basic models, pretty much insane.

So what we now know is that view is not correct and that cancer is a survival mechanism that’s unmasked. In fact, it’s quite amazing if you think about it that these cells can survive things that even in a chemical weapons war or atomic blast a normal human shouldn’t survive but these cells were able to.

So it speaks to how cancer truly is. It’s an amazing life-force, a regenerative energy that is able to survive the modern apocalypse of chemicals and inappropriate nutrients and pseudo foods and electromagnetic energy and viruses—vaccines for example—and be able to still live.

So when we look at cancer through that lens, we start understanding that the real answer is to adjust back to what is a more natural, healthy state of living, get the cells again to be healed, detoxification, proper nutrition. Things like that and not, obviously, blasting it with poisons and radiation.

Ty Bollinger: Two things you just said I want to expound on. You were talking about chemotherapy coming from the war theater. What do you mean?

Sayer Ji: Well, what they did was that they did a number of studies on mustard gas and how that is able to destroy fast-replicating blood cells, the white blood cells in sort of what they called hemotological malignancies. And because it was able to kill those fast replicating cells they, of course, used it to try to treat that cancer because they saw some effect that seemed to put it into remission. 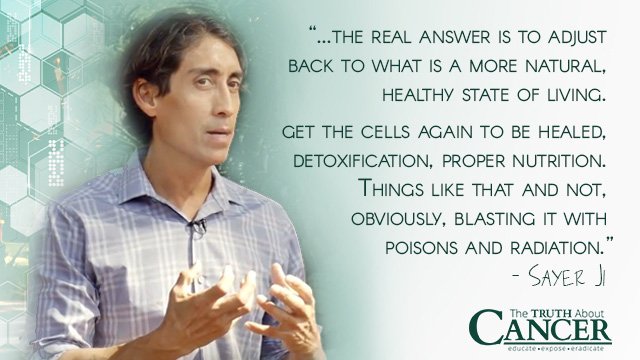 Of course, we know now that that type of chemical is able to cause damage to all the cells in our body and then ultimately, once you’ve taken that route and ultimately seen it fail because you don’t get a very long survival advantage, you blame the victim. You say the cancer is resistant to the chemotherapy. When in fact we know you shouldn’t use that approach. You should have used the natural approach.

Ty Bollinger: I see. And so some of the roots of chemotherapy go back to the mustard gases from previous war.

Sayer Ji: Absolutely, yeah. The origin of that category which is still being used today. In fact, in pediatric cancers, they use it sometimes, is really from the war.

Ty Bollinger: Wow. I bet many people don’t know that.

Sayer Ji: No, in fact, if they did know it, I’m sure they would think about alternatives with much more interest.

←
Previous
Cilantro: Love It or Hate It, This Healthy Herb Can Do the Body Good
→
Next
Methylsulfonylmethane (MSM): What Are Its Benefits for Healing Cancer?