You are here: Home / Cancer Treatments / Methylsulfonylmethane (MSM): What Are Its Benefits for Healing Cancer? 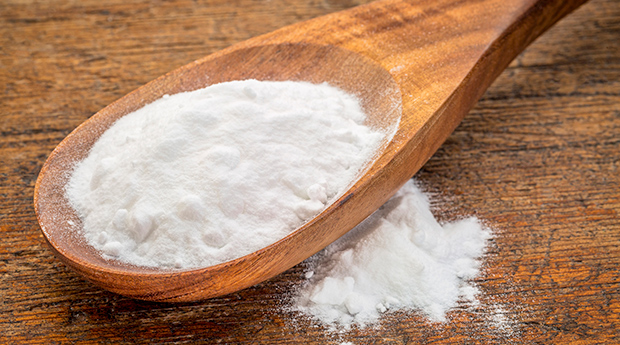 Besides being a substance that is almost impossible to pronounce, Methylsulfonylmethane (abbreviated to MSM) is often misunderstood in terms of how it specifically can help the body. It is becoming clear, however, that sulfur supplementation is a necessity in our increasingly toxic world. In addition, current research is discovering the role MSM can play in preventing cancer and even shrinking tumors.

Methylsulfonylmethane is a naturally-occurring compound in humans and is also found in hundreds of natural foods. Amongst the many things that MSM provides in the body are protection against oxidative damage and assistance in helping the body produce its own internal antioxidants. It also lends support to structural proteins and improves cell wall permeability. This allows other substances, such as vitamin C, to enter cells.

The most important thing to remember about MSM is that it is a source of much-needed sulfur in the body. Sulfur is used for dozens of biological functions, such as detoxification and regulation of inflammatory responses. Sulfur is present in over 100 bodily compounds and is found in every kind of cell. Of note is sulfur’s participation in glutathione production. Without sulfur present, glutathione can’t function as the super-antioxidant that it is.

MSM is made up of about 34% sulfur (by weight). In addition to being a direct source, methylsulfonylmethane also seems to aid in the actual metabolism of sulfur in the body − although exactly how it does this is still widely unknown.

What’s the Difference Between MSM and DMSO?

MSM acts as a metabolite of another sulfur source, DMSO (dimethyl sulfoxide). Until the 1960s, DMSO was being researched for its healing effects on cancer. Currently, however, DMSO is an FDA-approved “drug” only for use as an anti-inflammatory for horses and dogs. Many people, and some cancer clinics outside of the United States, still use DMSO as an anti-inflammatory and as a healing modality for cancer.

MSM, often called DMSOs “nearest cousin,” has some of the same properties as DMSO and is FDA-approved as a supplement for humans. Like DMSO, MSM can penetrate the skin. However, it cannot carry substances with it through the skin like DMSO can. Also like DMSO, methylsulfonylmethane has the ability to “open up” cell walls once it is inside the body.

Many details about MSM remain a mystery. There have been several key studies to date, however, which have demonstrated the effectiveness of MSM on conditions such as joint pain, inflammation, and arthritis when given in supplement form.

Because MSM is relatively safe (for most people, you cannot take “too much” of it), several clinical trials on MSM’s effects have taken place over the last ten years. A 2006 clinical trial conducted at the Southwest College of Naturopathic Medicine and Health Sciences in Tempe, Arizona, took a look at MSM’s effect on one of the most common forms of arthritis − osteoarthritis of the knee. The researchers found that 3 grams of MSM taken twice a day decreased pain and increased movement with no side effects.

How MSM is Being Used for Cancer

In terms of cancer healing, methylsulfonylmethane is increasingly being considered as a consistent and proven modality. As a stand-alone, it has been shown to reduce breast cancer tumors. This includes those in triple negative breast cancer, which often does not respond to conventional forms of cancer treatment. MSM also promoted cancer cell “apoptosis” (or cancer cell death) in certain gastrointestinal and esophageal cancer cell lines, according to a 2012 study published in the Journal of Gastrointestinal Cancer.

The specific mechanisms by which MSM does its work on cancer are still being studied. However, many health experts point to its ability to rid the body of lactic acid in the bloodstream (thus changing the environment where cancer cells thrive). They also note its presence as an anti-microbial. These are thought to be two possible reasons why MSM alone can sometimes be effective against cancer.

MSM is also being used in conjunction with other modalities. Again, this is because of its ability to increase “cell permeability,” i.e. open up cells, so that other substances can get in to either strengthen healthy cells or induce programmed death in cancer cells.

The main objective of combining MSM and high-dose lypo-spheric vitamin C is so that cancer cells can revert back to normal cells. In this modality, MSM is mixed with vitamin C so that it can be used as a “carrier” for the C. High-dose vitamin C itself, often administered intravenously, has a proven track record of destroying cancer cells. Adding MSM makes the C all the more effective at blocking the “cachexia cycle” (i.e. the lactic acid cycle that stimulates cancer cell growth), building the immune system, and targeting cancer cells directly.

MSM has also been used effectively with vitamin D3. Based on the microbial theory of cancer, a mixture of MSM, vitamin D3 (which is actually more of a hormone than a vitamin), colloidal silver, and ionic magnesium acts as an antibacterial super-solution. This mixture targets and destroys microbial life inside cancer cells, thus reverting them back to normal cells.

Again, the MSM acts as the mechanism through which the other substances can go into cells and do their work. The MSM-D3 combo is a fairly new natural protocol. It is said to enhance the potency of chemotherapy drugs as well, but should only be considered as an adjunct to other modalities until further research is done on its effectiveness.

How to Get the Most out of MSM

Getting nutrients in the form of food is always the most efficient and effective way to go for your health. Some whole foods that are particularly rich in sulfur are:

There was a time when the soil overall was purer and more nutrient-rich and our diets consisted of significantly more raw, simple, organic foods. During that time, our diet provided all of the sulfur that we needed for health.

Unfortunately, cooking (and processes such as pasteurization) neutralizes most MSM-based sulfur in food. With the majority of everyone’s plates these days consisting of cooked food and pasteurized dairy (while glaringly absent of raw veggies), sulfur supplementation in the form of MSM is pretty much a necessity. Many experts feel that the majority of Americans are deficient in sulfur.

MSM supplementation has proven to be the safest and also one of the most effective ways to get the sulfur that our bodies need on a daily basis. There are a few guidelines to keep in mind, however, when you are searching for an MSM supplement that is right for you:

So there you have it — methylsulfonylmethane demystified. The most important thing to keep in mind about MSM is that it is the safest, most effective form of sulfur that comes in supplement form.

If you are considering MSM for everyday health, as a cancer preventative, or as part of your own cancer protocol, take time to think about how you can also incorporate needed sulfur from the foods you eat as well. Green leafy vegetables, farm-raised eggs, and hormone-free, grass-fed meat sources not only contain high amounts of sulfur, they are also packed with brain-healthy fats and other nutrients as well. 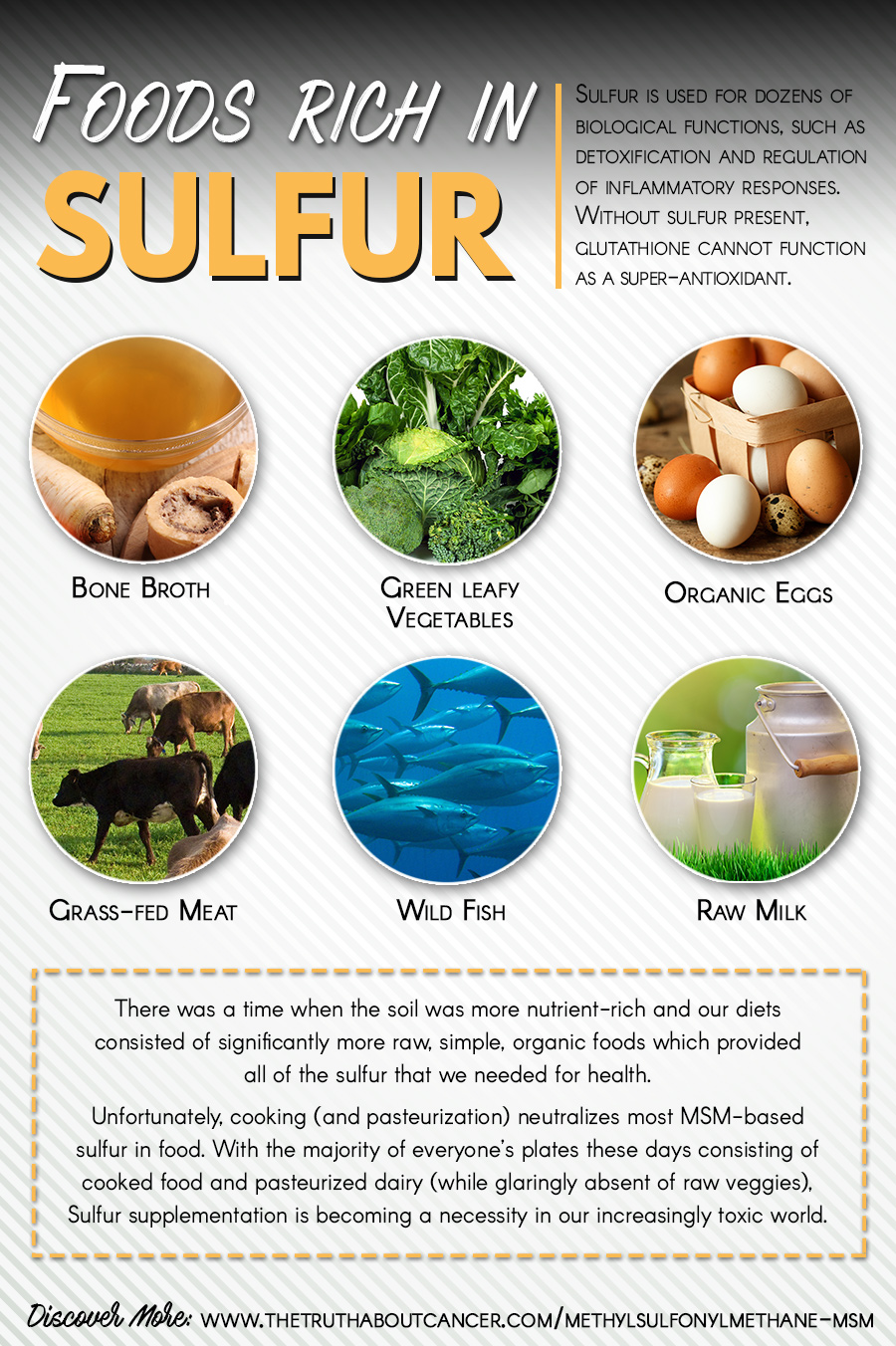 ←
Previous
The “Intelligence” of Cancer Cells (video)
→
Next
The Health Benefits of Kale: 9 Reasons to Love this Leafy Green Superfood