You are here: Home / Cancer Treatments / Can You Say “No” to Chemo? (video)

Video Transcript: Can You Say “No” to Chemo?

Ty Bollinger: Yeah, so let’s go back in time to the impetus that caused you to write your book. You wrote a book on cancer and it was called—what?

Laura Bond: It’s called “You Can Say No to Chemo.” In 2011, my mom was diagnosed with ovarian and uterine cancer, which is a pretty tough diagnosis. And people were shocked by her decision to say “no” to chemo, and to radiation. She didn’t want to do any of that.

So part of the reason I started writing a blog and then the book was to bring to light some of the limitations of chemotherapy, but also to show what else is out there. And there’s so much else out there, as you well know. From electrical fields for brain cancer, which is FDA approved, to turmeric, to cannabis oil, to high-dose vitamin C.

I’d already been a journalist for about six years. And so, as a journalist, I had access to doctors around the world. And I started interviewing them to find out what they were doing. And, you know, I’m indebted to these doctors, because they were so generous with their time and I wanted to share the information that they were sharing with me with other people.

So that’s the whole point of the book. It’s about choices. I’m not telling people what to do. Far from it. I’m simply opening their minds to the wide range of healing possibilities out there so people can make a decision based on information rather than fear.

Ty Bollinger: Right, right. That’s really our mission as well, is to put the information out there and to give people choices. Unfortunately—I don’t know how it is here in the UK—but in the United States, people feel like they’re limited to only chemo and radiation, surgery, if they’re diagnosed with cancer. What’s the atmosphere like here in the UK?

Laura Bond: It’s pretty similar. I mean, I think you’ll find the same thing in Australia as well. Unfortunately, doctors in America, Australia, the UK, they can risk losing their medical license if they recommend anything other than the gold standard, which is chemotherapy and radiotherapy. In my mind, those treatments are substandard. 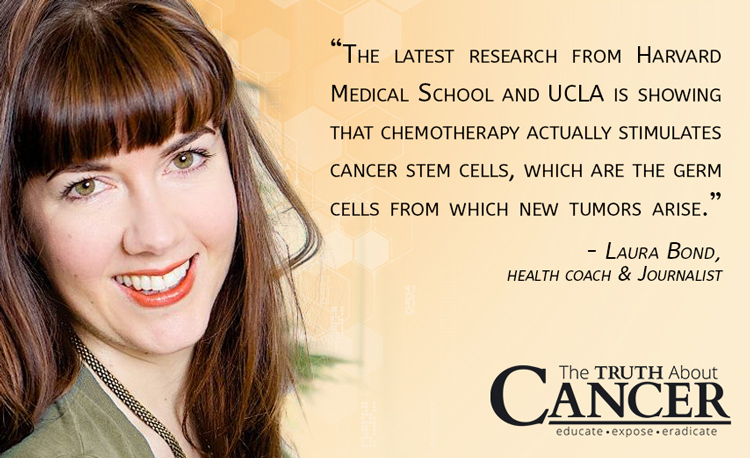 So we know that chemotherapy and radiotherapy cause cancer, which is the very thing they’re supposed to prevent. I mean, you look on the back of the chemo − certain chemotherapy drugs, like doxorubicin − and you’ll see a listed side effect is leukemia.

Laura Bond: Yeah. Absolutely. And you know as well as I do that the latest research from Harvard Medical School and UCLA is showing that chemotherapy actually stimulates cancer stem cells, which are the germ cells from which new tumors arise. So I wanted to make people aware of this, but also to bring them other options.

If you are going to do chemotherapy, there are ways of doing it which are far more targeted, which don’t devastate the immune system as much. You can avoid losing your hair, you can avoid feeling nauseous having chemotherapy, by doing say hyperthermia.

Laura Bond is a nutritional health coach, author, and journalist with over 10 years experience. She's written two books: "Mum's Not Having Chemo" and "5 Things Every Cancer Patient Needs to Know." As a health coach Laura specializes in helping clients beat stress, reduce their toxic load, and prepare their bodies for babies. Her features have appeared in The Sunday Times, Tatler, The Mail on Sunday, Psychologies, Cosmopolitan, Stylist, and Healthy.