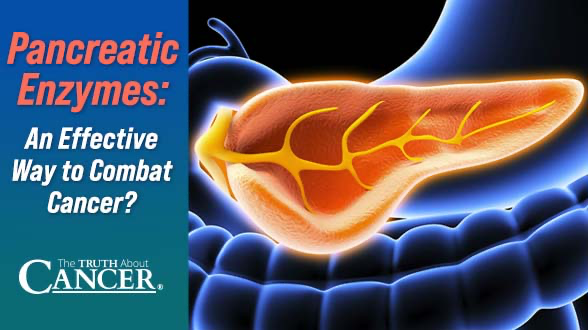 This year, over 56,000 Americans will be diagnosed with pancreatic cancer.1 Doctors will recommend a course of chemotherapy and radiation, which will further ravage their immune systems and leave them with a poor quality of life.

Approximately 4 out of 5 of them will die from either the cancer or the “treatments.” 2

But what if I told you that there was another way to combat pancreatic cancer? A protocol that has no side effects and relies entirely on nature and the body’s natural immune system to combat disease? I’m talking about pancreatic enzymes, which have been used for years as part of a tailored diet to fight cancer.

The pancreas is a gland that produces digestive enzymes and insulin. It’s an essential organ for maintaining healthy digestion and regulating blood sugar. Those with pancreatic cancer begin to lose their ability to produce these enzymes, which makes it nearly impossible to digest important fats and proteins or absorb nutrients.

This is called pancreatic exocrine insufficiency (PEI), and can cause a whole host of problems. What’s worse, conventional treatments like chemotherapy and invasive surgery only serve to exacerbate the problems. This can result in severe malnutrition, unhealthy weight loss, diarrhea, and abdominal pain.

Many people combat these symptoms by taking pancreatic enzymes.3

A healthy adult pancreas will release over 700,000 units of lipase during the course of a meal. The supplements are taken with every meal to assist with digestion and nutrient absorption. But even with capsules containing 25,000 units of lipase, patients can wind up taking several pills with every meal. At an average retail price of around $4 per capsule, this can cost thousands of dollars each month.

There’s a long history behind the use of pancreatic enzymes, so here’s a quick rundown:

1958 – Dr. Max Gerson publishes A Cancer Therapy: Results of 50 Cases, in which he describes a new protocol which is now known as the Gerson Therapy. This therapy is still used today and utilizes a specialized diet designed to remove toxins from the body and reduce inflammation. It also focuses on pancreatic enzyme deficiency as a root cause of tumor development.

In the 1960s, an orthodontist named Dr. William Kelley developed a metabolic therapy based on the same idea that all cancers are caused by specific enzyme deficiencies. He utilized a strict diet, coffee enemas, laetrile, and pancreatic enzymes to treat cancer patients. Kelley developed his therapy after being diagnosed with “terminal” pancreatic cancer. The cancer was eventually eliminated from his body.

1987 – Nicholas Gonzalez, a doctor and medical journalist, continues to build on the work of his mentor, Dr. Kelley. Armed with the belief that cancer is the result of poor diet and environmental toxins, he went on to develop the Gonzalez Protocol. This protocol relies heavily on pancreatic enzymes, which Dr. Gonzalez believed to be the body’s main defense against cancer.

On my recent journey through Asia, I spoke with Dr. Jaime Dy-Liacco, who has been using pancreatic enzymes and nutrition to heal his patients. He shared how doctor Kelley helped cure him of prostate cancer using his naturopathic therapy. 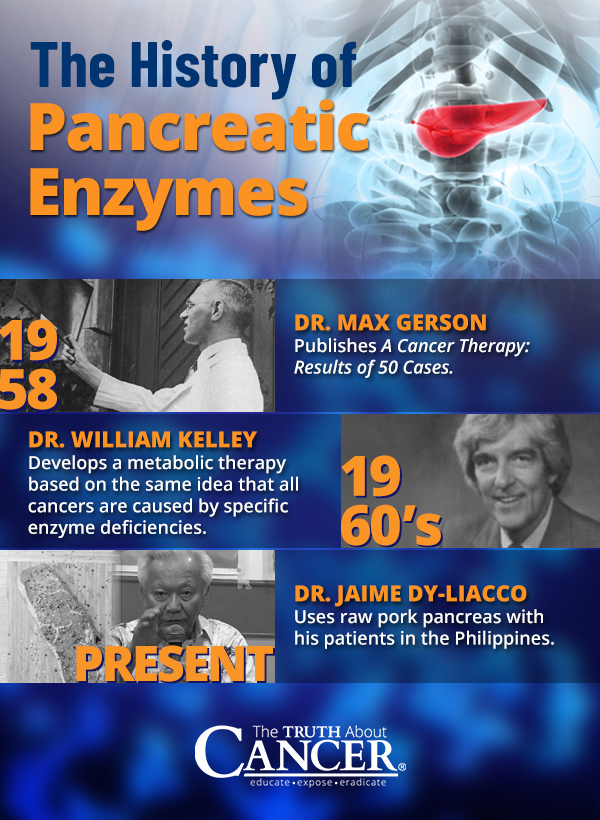 He explained that cancer cells have an animal protein coating that makes them invisible to the immune system. By increasing the level of enzymes that help break down these proteins, he explained, we can allow the immune system to target and destroy these cells.

But Dr. Dy-Liacco practices in the Philippines, which is an impoverished nation. Dr. Kelley’s protocol calls for over 100 capsules a day to increase enzymes and other nutrient intake, a price most Philippine people cannot afford. In order to make the therapy accessible to everyone, Dr. Dy-Liacco prescribes 2 tablespoons of raw pork pancreas several times a day. The enzymes this provides help to break down the coating of the cancerous cells and have helped many of his patients heal their cancer.

The body is an amazing creation capable of handling almost any illness or disease. It’s often our own poor diet and lifestyle, combined with environmental toxins, that lead to suppression of the immune system. Pancreatic enzymes have been shown to help with a host of health problems.5

Most oncologists recommend the same standard methods of chemotherapy, surgery, and radiation to treat cancer, but many doctors believe there is a better, more natural way. Pancreatic enzymes, in both supplemental and raw form, can help the body return to a healthy state and has shown great promise as an effective way to combat cancer. Always be sure to consult with a holistic nutritionist before making major changes to your diet.

As always, we believe that your treatment is entirely your choice. We’re here to provide information so that you can make an informed decision, whatever that decision may be. For those with religious restrictions on pork products, here’s an excerpt from pancreaticcanceraction.org:

Currently, all enzyme replacement products are produced from pork derived ingredients and no alternatives are available. However, pancreatic enzymes have been approved for use by Jewish patients by the Chief Rabbi. For Muslim patients, Dr. Abdul Hamid Mohamed, London Central Mosque Trust, has advised the following: “If, and only if, no other medicines than the ones containing prohibited substances are suitable to cure the illness or disease in the opinion of the physician, then the medicine containing the prohibited substance should be prescribed and taken by the patient.” 6