Ty Bollinger: How come America spends DOUBLE the amount on healthcare per capita than any other nation does… and yet we’re so far from being the healthiest nation? Is the current medical model, especially when it comes to treating diseases like cancer, dead?

Charlene Bollinger: Be sure to keep watching when Dr. Quillin reveals the six main vectors that he believes are truly responsible for maintaining a healthy body.

Dr. Patrick Quillin: We’re number one in cost of healthcare. America spends twice the amount of money per capita as any other country on Earth. And the other countries give it away. How do we do that? Keeping time. What happened for many years is humans kept time with a pendulum. And eventually it turned into gears, and then eventually smaller gears, and then watches, and then a dozen moving parts, and then jewel-driven, and then they kept saying “If we get the parts smaller, we’ll make it more accurate.”

And finally, somebody said “No, we’re going to completely ignore that paradigm and we’re going to take a piece of sand, silica, and pipe electricity through it and measure the amount of energy, and we can keep time perfectly with no moving parts.” Shift the paradigm.

And that’s what we need to do in cancer treatment. What’s going on right now is cut, burn, and poison the cancer out of your body. What if we went into a re-regulation? That’s where we’re headed. So, this came out from the Journal of Clinical Oncology. “Shifting the Cancer Paradigm: Must We Kill to Cure?” The answer is no. These oncologists said, “We have reached the zenith of the ability to cure cancer with toxic agents.” 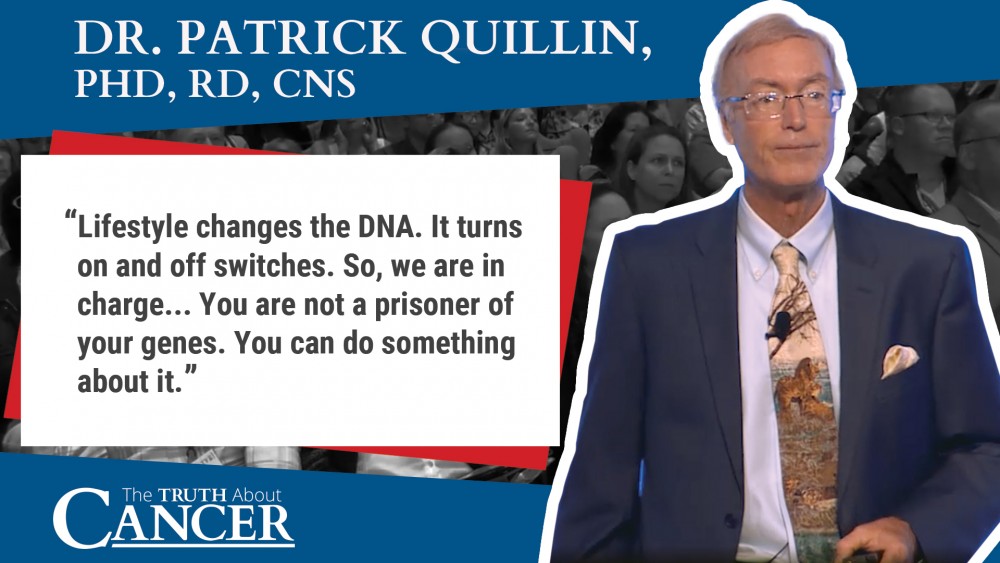 So, what we need to do, the real cure for cancer will be selective tumor debulking, such as in great books, The Truth About Cancer—Ty Bollinger has a brilliant book out. I don’t think the man ever sleeps. I know if you look at what he has done, it’s just extraordinary accomplishments.

And number two is change the underlying cause of the disease. Louis Pasteur, on his deathbed said “I have been wrong. The germ is nothing. The terrain is everything.” We are surrounded by billions of bacteria in this room right now, but you’re not sick. And the reason is your host defense mechanisms.

Homeostasis. Non-specific host defense. And the fact is, we need to pay homage to that. The modern consumer is like a moth to a flame. That means it looks good, but they’re killing it. White flour, white sugar, white potatoes, white rice, white corn. You will see throughout this conference that there is a comprehensive theme of avoid fake foods; get into real foods. If it won’t rot or sprout, then throw it out.

There’ll be some minor variations on that theme, but that is our central theme. And what Americans are doing is eating 140 pounds per year of refined sugar, and it’s killing us. So, let’s have a look at the human body. Shakespeare said it best, “What a piece of work is a man. How noble in reason, how infinite in faculties. In form and moving, how express and admirable. In action, how like an angel. In apprehension, how like a god. The beauty of the world, the paragon of animals.” That’s you. What’s going on inside of you is a miracle.

I want you to think about this: [there are] 70 trillion cells in your body. Once you’ve been cremated, what’s left is worth $4.50. However, before that, a Mahatma Gandhi, a Jacques Cousteau. People can create amazing things with the force of life that is in us. At any given second, there’s 70,000 billion-billion chemical reactions occurring in your body. If this stuff doesn’t awe and strike admiration in you, then you’re not paying attention. And what I’m trying to instill in you is an enthusiasm for what’s going on in your body and your responsibility to maintain this.

Moving on here. We eat 100,000 pounds of food in life, for better or for worse. 206 bones that are stronger than steel, can break a concrete brick if trained properly, or play a concert. Unbelievable. 100 billion neurons in the brain, and 100 trillion synapses in the brain. This stuff is phenomenal, what you are built from.

And what optimizes that? These are the six vectors that will restore your health. Here’s where we’re going for the next few minutes is that this will be cancer treatment of the 21st century. These six main vectors maintain that miracle that’s going on in your body, and it’s attitude, exercise, toxins, energy, the microbiome, nutrition, with the wildcard is genetics. And you say, “Are we all prisoners of our genes?” No.

A study done by Ornish, in which he looked at patients with indolent or slow-growing prostate cancer, and he found that they did needle biopsies and microarrays of the tissue, the prostate cells, and found that through diet, exercise, and meditation, he made 500 changes in the DNA in three months. Lifestyle changes the DNA. It turns on and off switches.

So, we are in charge. It’s called epigenetics, nutrigenomics, call it what you want. You are not a prisoner of your genes. You’re not walking into a slaughter yard, just like your parents. You can do something about it.

Ty Bollinger: Thanks for watching. We hope you liked today’s video!