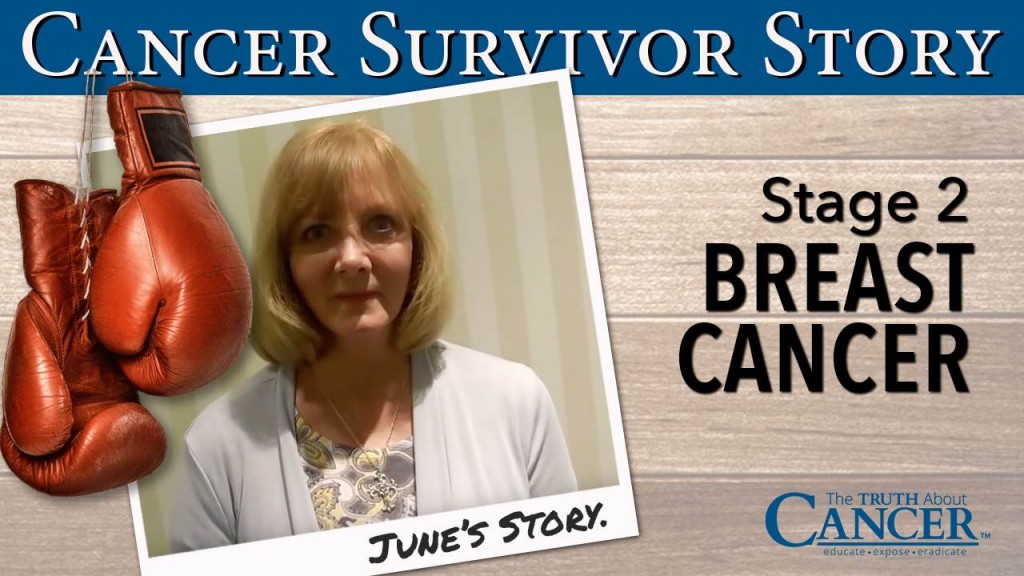 Before even giving her options, the doctors told her that the tumor needed to be removed and she’d have to endure a year of radiation and chemotherapy.

When visiting her oncologist Tina noticed the other patients were “looking half dead.” She made up her mind that would not be her and that she was going to fight her stage 2 breast cancer… naturally.

Watch the video above to discover what steps June took on her journey back to health.

So, if you have a personal story to share of your triumph over cancer, please click here and tell us all about it. ?

Ty Bollinger: I’m here with June, and June you are a breast cancer survivor, thriver.

Ty Bollinger: If you could tell us a little bit about the type of cancer you had and what you did to treat it.

June: Okay, I had invasive ductal carcinoma, HER-2 positive. And it was in Stage II − 2.5 centimeters. And usually that’s even further with that large of a tumor, but they were surprised it wasn’t further along.

Then when I was at the oncologist, I saw these people there with needles in their arms and they looked half-dead, and I thought, I’m not going to let that happen to me. I can’t believe that doing that is going to save my life. They all look like they’re dying, not living.

So I just went home and I prayed. And I said, I can’t believe God made our bodies to take poison to heal them. I just can’t believe you kill good cells to heal yourself. So I went researching on the internet, which my doctors told me not to do. They said stay off the internet.

But I don’t listen too well. And that’s when I found Ty’s book. I started reading it and I started thinking, I’ve got to stop what I’m doing to get rid of this cancer. And I went in my cupboard, threw all the food away. Didn’t give it away.  Threw everything out; everything out of my refrigerator. Completely threw it away.

And I started eating complete whole foods. Uncooked spinach, drinking carrot juice, eating tomatoes, cherries, broccoli, cauliflower, asparagus. Every kind of vegetable that was pure, organic, clean, and not boiled away. I didn’t boil any kind of food.

Four weeks later I go back to the oncologist after they did that onco-type D test to see how much the Receptin and the chemo would help me or whatever. And my oncologist was just like looking at the screen on his computer and he wouldn’t say anything.

He’s never needed to see me back again. I’m fine. And I’m two years today cancer free. So eating healthy makes cancer go away. And it’s a way that you have to continue, because something in my system allowed cancer to grow instead of leave.

So I’ve done detox programs, and I consistently detox on a regular basis. I eat the right foods. I learn the kind of foods that cause cancer to grow. I found that broccoli sprouts are really good for you. And I just saw in our magazine this month what the researchers are doing in their labs; there’s a chemical in broccoli that cures cancer and kills cancer cells and they know this.

So eat your broccoli. Don’t get chemo. And another thing that I say to you is they did give me radiation, and I had said to the radiologist I’m praying for a cure to cancer. And her response to me was, “Oh honey, if they find a cure for cancer they’ll never pass it. There’s too much money in this business.”

Then she turned around and said to me, “I’ve got job security,” while she’s filling me with this poison that might kill me. And I just felt like I had to do something to make people aware. We don’t have to die from this. We don’t have to. And that’s the rest of my life I’m going to spend, like Ty, helping people to get well. I’m talking to people everywhere I go.

I had a repairman come to the house yesterday, and I started to talk to him, and I said, “I hope I’m not boring you.” And he said, “Oh no, I could listen to you talk all day about this.” Now he’s starting to do it. Other people are calling me up saying, “I’m doing this now. And I’m eating better because of you.”

So it makes you feel like you’re here for a reason. God let me live for a reason, and it’s to help other people eat his foods. Genesis 1:29 and 30: Eat the foods the Creator gave us and your bodies will stay healthy.

Ty Bollinger: Wow, June. That was so great. Very encouraging. That’s really going to bless the people that hear it.

Ty Bollinger: And it’s really inspired me. Thank you for sharing with us today.

June: Thank you so much.

Click Here and Tell Us YOUR Cancer Survivor Story »