You are here: Home / Cancer Causes / 10 Cancer Causing Toxins You Need to Avoid 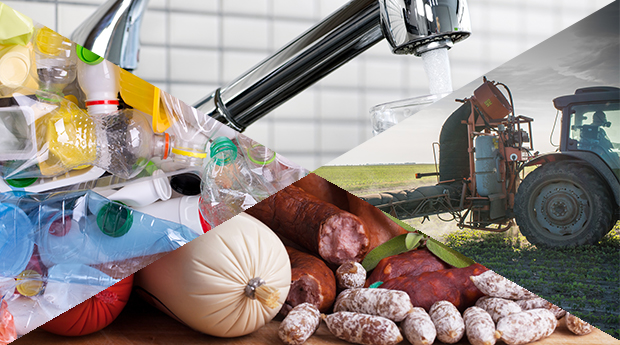 Most people assume they and the environment around them are generally healthy. The sad reality is that we are living in a toxic world. Events that have occurred over the last 50 years have dramatically increased the environmental pollutants in our air, water, and soil.

Every human being is now toxic to a certain extent and as the bucket theory supports, our toxicity load increases every day. Eventually the bucket will overflow and the number of symptoms and obstacles our body struggles to manage will result in disease − oftentimes cancer.

Partly to blame is the explosion of the manufacturing industry. There is an increase in metals and hazardous chemicals like there has never been before. The United States reported in 1998 that industries were manufacturing 9,000 various chemicals in the amount of 6.5 trillion pounds. Disregarding smaller companies, major American facilities alone reported dumping 7.1 billion pounds of waste. This waste, which ended up in our air, water, and soil consisted of 650 unique industrial pollutants.

Here are 10 of the most potent and hazardous chemicals in the environment you need to: 1) be aware of, and 2) avoid as much as possible through your lifestyle choices and purchasing decisions.

The use of PCBs in industrial manufacturing has been banned for decades in the U.S. However, this organic chemical remains present in the environment and accumulates into our bodies.

Major Sources: One of the most concentrated food contaminants is farm raised salmon. PCBs from the environment are found in fish that are macerated and used as a food source for the salmon, causing bioaccumulation of the toxin.

Alarming amounts of pesticide residue is detectable in up to 95% of foods in the United States. The Environmental Protection Agency (EPA) estimates that the following percentages of pesticides are carcinogenic:

Industrial combustion processes produce chemical compounds known as dioxins. The burning of fuels from coal, oil, and wood as well as commercial and municipal waste incineration results in the synthesis of dioxin chemicals into the environment.

When chlorine is added to water, this chemical is formed. It is a colorless liquid that has a slightly sweet taste, non-irritating, and pleasant aroma. Chloroform is used in the production of other chemicals.

Major Sources: Both water and food consumption can contain chloroform as can the air. Avoid processed foods and filter your water.

Heavy metals are extremely prevalent in the environment around us and can readily build up in soft body tissue. Some of the most concerning include mercury, aluminum, lead, cadmium, and arsenic.

Not only must we concern ourselves with avoiding chemicals that accumulate in the environment around us but we must also make ourselves aware of harmful food additives that inundate our food supply. Currently there are 3,968 FDA approved food additives that are impossible for you to remember. The following are 5 of the most toxic to your health which you should avoid.

These synthetic sugars stimulate the sweet receptors on our tongue by up to 7,000 times stronger than natural sweeteners. Artificial sweeteners were first discovered during a mistake in a lab decades ago but since has taken off in various forms in the marketplace. Eliminate artificial sweeteners from your diet and use healthier and natural options like honey, maple syrup, and organic green stevia.

Sources: Primarily found in diet foods and beverages. Examples include acesulfame potassium and aspartame. A few popular marketed brands include Sunett, Sweet One, Equal, and NutraSweet.

Your exposure to artificial flavorings is almost unavoidable. Their prevalence is widespread in a variety of food products and are used to enhance the taste or mimic natural flavors. Extremely limited research has been conducted on the toxic effects of artificial flavorings, posing the question… what are the long term health consequences?

Food coloring from the presence of food dyes is also used to present a desirable color to the consumer, which mimics its natural state. Some of the most critical food colorings you should avoid include red and yellow food dyes.

Risks: Some of the known chemicals used in artificial flavoring such as alpha-diketone and diacetyl are known to cause problems like respiratory complications and may trigger fibrosis. Convincing evidence supports that artificial food colorings cause severe reactions associated with hypersensitivity, increased cancer risks, and thyroid dysfunction.

This chemical is designed as an antibacterial and antifungal agent. It is added as a food preservative and it is best to be avoided.

Eliminating this food additive from your diet is critical and is especially a concern for newborns. Carrageenan is easily absorbed through the gastrointestinal (GI) tract and poses a significant harm in its metabolized forms in the body. Extracted from certain seaweeds, carrageenan is intended for use to replace fat and thicken foods and beverages.

Hydrogenated oils are one of the worst offenders to our health and their prevalence is also widespread in many of the foods we eat. Hydrogenated oils stimulate inflammation in the body leading to the damage of cellular membranes and a wide array of chronic diseases to follow. its use results from manufacturer’s desire for cheap production. A compound is bombarded with hydrogen in a lab in order to create a denser oil to be used as an alternative to butter. Trans-fats should be eliminated entirely from your diet.

Avoiding Toxins in Your Environment:

Although some food additives are generally considered safe, avoiding the 5 major food chemical groups listed above will help you promote better health today. Eating high quality whole foods sourced organically and locally is one of the best ways you can limit your exposure to many environmental toxins.

Eating a healthy diet is critical to living an anti-inflammatory lifestyle and reducing your exposure to toxins. Organic produced foods are more likely to have fewer toxins because their soil is healthier and natural pesticide strategies are used. The following tips are other strategies you should consider to preventing disease from developing in your body:

←
Previous
How to Support a Loved One With Cancer: 4 Ways to Nurture Them & You
→
Next
The Little-Known Connection between Diabetes and Breast Cancer