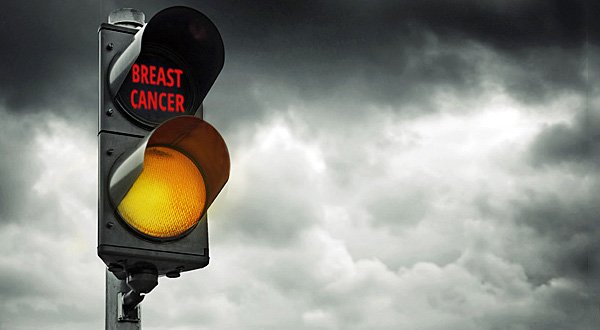 Breast Cancer Awareness month happens every October, which means the “Great Pink Push” is unleashed. The cancer industry will shift into overdrive, urging women everywhere to get their mammogram screenings as they beg for cash donations for breast cancer research. All the while providing little in the way of practical preventative tips and tools that women can use to avoid this common form of cancer.

As an informed, health-savvy individual, you probably want to know what signs of breast cancer to look out for in order to nip breast cancer in the bud instead of having to deal with the weight of a breast cancer diagnosis after it’s progressed. Of course, we hope this will never happen! We’ve compiled a list of seven early warning breast cancer signs, most of which are rarely talked about in the media.

Learn these breast cancer symptoms and signs as part of your preventative arsenal to stay ahead of the game. (You can also learn about the stages of cancer here.)

The most common way that conventional doctors look for the first signs of breast cancer in women is to identify lumps in the breast. They most often do this with mammogram x-rays. This offers physicians a basic roadmap for navigating the terrain of breast tissue, which they believe allows them to pinpoint any lumps, masses, or other warning signs of breast cancer that might point to a malignancy.

But mammograms can be a potential cause of cancer due to the ionizing radiation they send into breast tissue. They also aren’t accurate 100% of the time, despite what you may have been told. Lumps and masses in breast tissue can be either benign (harmless) or malignant (cancerous), and mammograms don’t differentiate between the two. This often leads to false diagnoses and unnecessary treatments with chemotherapy and radiation.

A better option, if you choose to undergo routine cancer screenings, is thermography. This unique screening method allows doctors to not only look for unusual lumps or growths, but look for other breast cancer symptoms in women. This can include identifying whether or not angiogenesis is taking place within the breast tissue, which is a much stronger and more accurate indicator that breast cancer may be present.

Angiogenesis is a fancy way of saying new blood vessel growth, which may reveal that a woman’s body is trying to build a new supply system for blood to be delivered to developing breast tumors. Doctors who specialize in examining thermography images will be able to identify whether or not angiogenesis is taking place, and suggest a proper course of action.

Other possible symptoms of breast cancer include:

Your Hormones and Cellular Health

A lot of health experts like to talk about breast cancer as something that results from “bad genetics,” being passed down from mothers to their daughters. This implies that breast cancer can’t be avoided and occurs as an unfortunate “luck of the draw” type scenario. And depending on the type of breast cancer they’re talking about, there may be some merit to this popular theory.

But most types of breast cancer are a result of environment, diet, and lifestyle, all of which dictate how a woman’s endocrine system produces and balances hormones. In other words, hormone imbalance plays a much greater role in determining breast cancer risk than many people think. Thermography can help qualified physicians determine whether or not a woman has an elevated breast cancer risk due to this often overlooked early indicator.

Every woman’s body has a unique ebb and flow, and getting in tune with your own personal rhythm is invaluable for recognizing the signs that you have cancer. Paying close attention to any unusual changes that might be occurring, especially within breast tissue, is critical to avoiding breast cancer.

If you feel any unusual aches or pains in your breast, including occasional throbbing, pain, or even fluctuating discomfort, talk to your healthcare provider. Many women assume that only an isolated lump with localized pain suggests the presence of breast cancer. The truth is that breast cancer can manifest as “scattered, seed-like” tumors that, in some cases, spread like small tentacles throughout breast tissue.

Experts from MD Anderson Cancer Center in Houston warn that breast cancer often shows up without the classic breast cancer warning signs of lumps or redness. As mentioned above, other breast cancer symptoms in females can include swelling and irritation, dimpling, nipple discharge beyond normal lactation, nipple inversion, and/or a thickening and reddening of skin around the nipple. These are all potential early breast cancer signs you need to pay attention to in your body.

There are breast cancers that present as half a lump or there may be no lump at all,” says Dr. Naoto Ueno, chief of Translational Breast Cancer Research at the Center, as quoted by CBS News. “It could just be a strange-looking skin appearance or skin being red or dimpled.”

Just be sure to look for patterns of change or any new and unusual symptoms that occur outside the norm. Occasional aches and pains may not be early symptoms of breast cancer, but persistent itching, for instance, could point to fluid buildup, poor lymph function, or your body trying to create new blood vessels for breast tumors.

Upper back pain that feels as though it’s coming from deep within the bones may be an early sign of breast cancer. But don’t assume that every occasional bout of soreness or back pain you notice means you’re becoming the next statistic! Chronic back pain that doesn’t relent with stretching, chiropractic, or other means may be a sign that breast cancer tumors are forming.

Sometimes when tumors are developing in a woman’s breast, they put pressure on the ribs and spine causing persistent pain. You need to be aware of any changes that occur in your spinal column, upper back, and even neck. Talk to your doctor if you feel as though the pain you’re experiencing is unusually pronounced and marked by pressure from a possible internal growth.

If you’re not getting enough of the right nutrients in your diet, including vitamin D and iodine, your risk of developing breast cancer is already elevated. Nutrient deficiency is endemic in the West. Many people don’t realize that what they’re not eating is increasingly their likelihood of developing chronic health conditions such as breast cancer.

Nearly 75% of the adult “healthy” population is deficient in iodine, which has been shown to help ward off cancer cells in the breast and elsewhere throughout the body. Vitamin D deficiency is another one of the risk factors in breast cancer. A 2012 study published in the Indian Journal of Endocrinology and Metabolism revealed that low vitamin D levels are a hallmark in women with breast cancer. Other studies show similar findings.

A good rule of thumb in today’s nutrient-depleted world is to supplement with these and other cancer-fighting nutrients such as selenium and zinc. You may also wish to consult with a trained naturopath or integrative doctor. They can help you identify any specific nutrient deficiencies you might have and help you optimize your unique biological “terrain” for the very best breast cancer prevention.