You are here: Home / Uncategorized / Eating With the Seasons: Top 10 Fall Foods 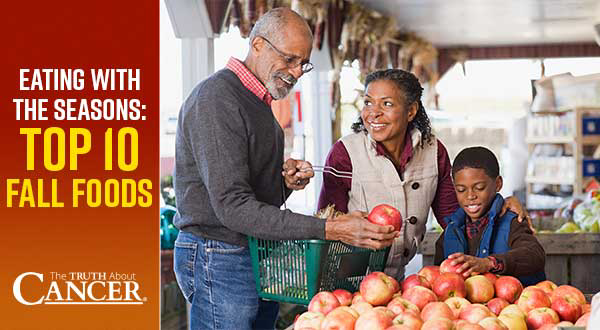 The fall season comes with cozy sweaters, the changing of the leaves, and pumpkin spice everything. But fall is also known as “the harvest season” – and for good reason! As the heat of summer begins to cool, there is a bounty of delicious (and nutritious!) foods that we all enjoy. After all, what would autumn be without fresh-picked pumpkins and apples?

But did you know that many of these foods can help keep you healthy and ward off disease? The ancient healing art and science known as “Ayurveda” takes into account the best diet and activity level for each person according to season.

When it comes to eating with the seasons, fall is one of our all-time favorites. Here are our top 10 fall foods that will keep your body running like a well-oiled machine… and help fight off the ailments most common this time of year.

Procyanidin, a type of antioxidant found in apples, has been found to lower LDL or “bad” cholesterol. The bacteria in the colon also digests the bioactive compounds in our Fijis and Macintoshes and converts them into healthful components used by our bodies. Apples may also beneficially impact the helpful microbiota in our gut, which is essential for a strong immune system. What’s the best way to prevent seasonal colds and flus? A strong immune system.

Fresh artichokes are absolutely brimming with both flavor and disease-fighting antioxidants this time of year. According to research published in the Nutrition Journal, they actually contain more antioxidants than almost any other vegetable. Antioxidants like rutin, quercetin, silymarin, and gallic acid have also been shown to prevent cancer. Artichokes are also loaded with prebiotic fiber, which can help with detoxification AND fight diseases like Lyme.

The disease fighting power of broccoli, combined with being inexpensive and readily available, make this cruciferous vegetable family member one of our top picks for an anti-cancer diet!

Even better is that the primary health benefits of broccoli are available to you by consuming a meager half-cup serving every day. It is naturally high in fiber, anti-inflammatory, detoxifying, and boasts powerful antioxidant content. Every serving of broccoli also contains:

Betalain, the compound found in beets, is linked to a wealth of health-promoting benefits, including reduced risk of cognitive decline, improved immunity, and protection from cellular damage that can lead to chronic disease down the line. Beetroot extract has been shown to reduce the division and growth of tumor cells in animals. One test-tube study using human cells found that beetroot extract, which is high in betalain pigments, reduced the growth of prostate and breast cancer cells

Cruciferous vegetables like brussels sprouts contain natural compounds with protective effects against cancer. One of these is sulforaphane, which has been shown to help fight the very genesis of cancer in laboratory experiments, including in animals. Brussels sprouts also count as nutritional powerhouses thanks to powerful glucosinolates – compounds linked to lowering your cancer risk by protecting your cells from harmful DNA damage.

For those following a ketogenic or a low carb diet, root vegetables typically pose a problem. However, one root is relatively low in carbs compared to other tubers, and that is celery root (or celeriac). Celeriac isn’t actually the root of celery, although it is in the same family. It’s a fairly odd-looking veggie with a nutty, lemony flavor. While it can look intimidating, it is easily peeled with a sharp knife. Whether you use celery root sliced in crunchy salads or blended into hearty soups, a cup will provide 20% of your daily vitamin C, plus a dose of cognition-boosting vitamin B-6 for only 60 calories.

Fennel is filled with folate, a type of B vitamin that helps with muscle and nerve function, as well as allowing you to reap the energizing benefits from all the foods you eat. Rich in antioxidant nutrients such as vitamin C and plant flavonoids such as quercetin, fennel can also help reduce inflammation. A high intake of a wide variety of foods that are rich in these protective polyphenols is linked to a lower risk of a number of chronic diseases.

One serving of this cruciferous veggie packs roughly half your recommended daily allowance of both fiber and potassium, two blood-pressure-lowering nutrients of which most Americans get shockingly little. Swapping some spuds for cauliflower is an easy way to sneak in extra vitamin C, potassium, and plant-based omega-3’s to your meal. Importantly, cauliflower supports digestion and detoxification. This is due to its sulfur-containing compounds, known as glucosinolates. These compounds break down in your stomach into byproducts during digestion, supporting efficient nutrient absorption as well as toxin and waste removal.

You may think of grapefruit as a summer treat, but most citrus fruits actually come into season in late fall. Originally known as the “forbidden fruit of Barbados” when it was first described in the 18th century, grapefruit is packed full of nutrients and anti-cancer potential. Interestingly, grapefruit essential oil has even more healing applications than the slightly bitter fruit. A 2016 Egyptian study stated that grapefruit has a high polyphenol content. Polyphenols are active anti-cancer, antioxidant phytochemicals. These researchers also found that grapefruit was protective to genes and DNA, and has immune stimulating properties.

Cranberries are a staple at holiday meals, but did you know that these little red berries can  improve blood pressure and cholesterol? The anthocyanins that give cranberries their signature coloring can also help reduce oxidative stress. When your body is exposed to harmful chemicals, it produces free radicals. Too many free radicals in your body can cause oxidative stress, which is tied to a number of diseases, like Alzheimer’s and diabetes. Additionally, cranberries are loaded with vitamin C and other antioxidants linked to reducing risk of chronic disease and improving circulation.

If you thought we forgot about the most iconic fall food – pumpkin – fear not! We’ve got an entire article dedicated to the amazing health benefits of pumpkin. Check it out here.