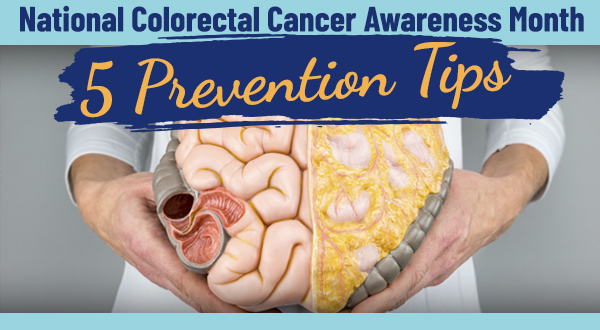 Colorectal cancer is the second most common cancer diagnosis among females and the third most common in men worldwide. Despite technological and pharmaceutical advancements in diagnostic and therapeutic programs, colorectal cancer has a 5-year survival rate of only 54-65%.

March is National Colorectal Cancer Awareness Month and a reminder that you and your loved ones do not have to contribute to the heartbreaking statistics. This March, take time to implement new habits into your routine for colorectal cancer prevention.

Preventing colorectal cancer primarily begins with understanding the risk factors involved. Hundreds of studies performed detected that the following lifestyle factors are associated with an increased risk of colorectal cancer:

Although these risk factors for colorectal cancer should all be noted, some lifestyle habits significantly elevate your risk more than others. For instance, the evidence that processed red meat consumption (non-organic), low physical activity, and a diet poor in nature’s antioxidants (i.e. eating few or no veggies) drastically raises your likelihood of developing cancer of the colon or rectum. 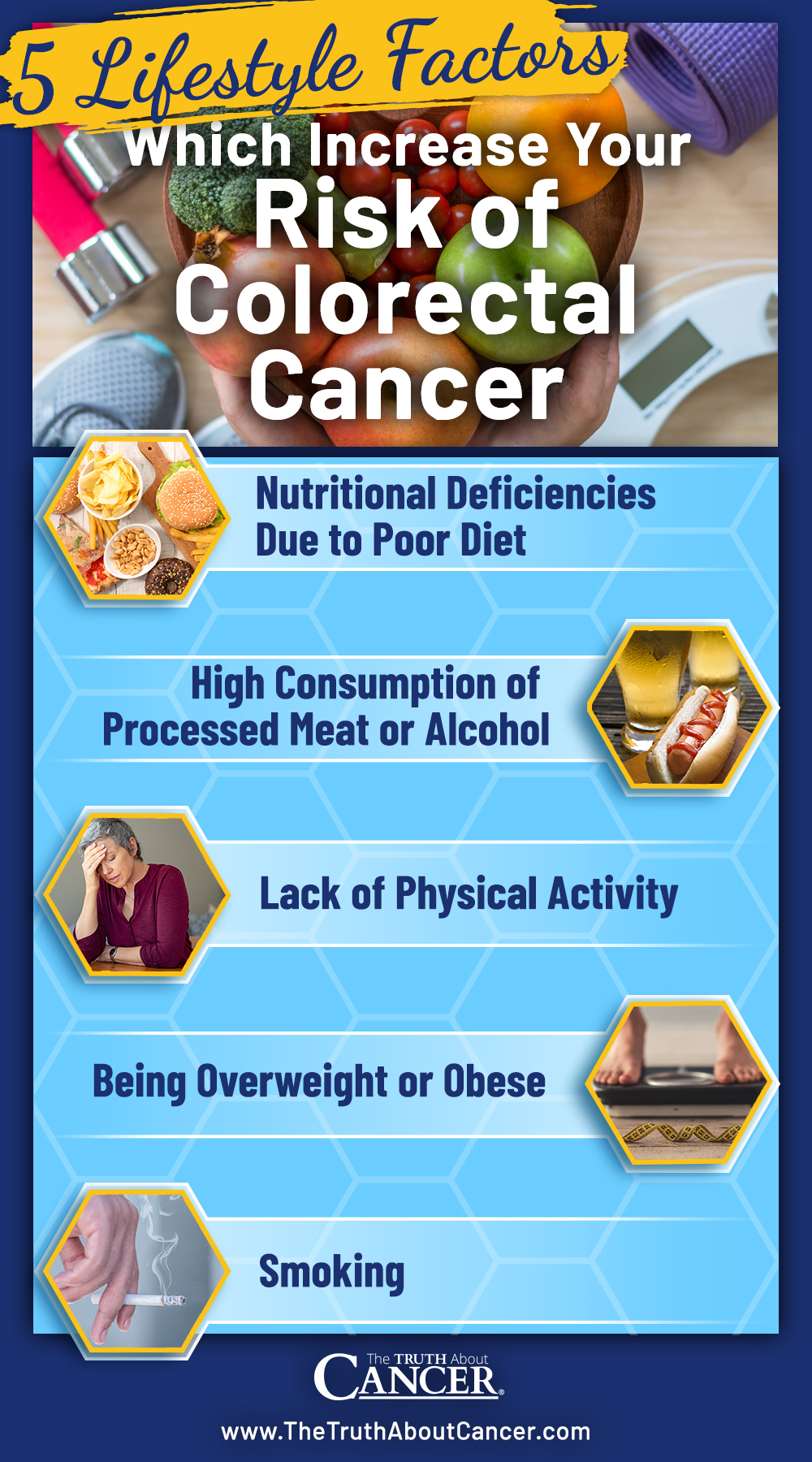 The latest warning released by the World Health Organization in 2015 may have already resulted in a diminished taste for consuming red meat on a regular basis. A diet high in red meat consumption is significantly linked to an increased risk for colorectal cancer. It should be noted that this is non-organic red meat from animals fed GMO grains and pumped full of antibiotics and growth hormone. This warning does not apply to healthy amounts of red meat from animals that are grass-fed and organic. Grass-fed meat is more nutrient dense and has high levels of omega 3 fatty acids and cancer fighting conjugated linoleic acid (CLA).

Red meat contains natural compounds that transform into carcinogens when exposed to heat. The high heat flame of a grill especially increases their natural formation of toxins like polycyclic aromatic hydrocarbons (PAHCs) and heterocyclic amines (HCAs) which are known cancer causing agents. These compounds interact with genes, particularly in individuals with an inherited predisposition to the disease, and cause cancerous mutations. Other sources of these carcinogens are processed meats, which are also most commonly found to contain cancer-promoting nitrites and nitrates.

To reiterate, consuming grass-fed red meat that is cooked at a lower temperature is fine. Low temperature cooking methods are critical as this produces less PAHCs and HCAs.

Physical activity is known to reduce the risk of colorectal cancer even in individuals with increased BMIs. In other words, physical activity is an independent protective factor that you can implement in your life today regardless of your weight concerns.

Dozens of studies have found that regular exercise can reduce the risk of colorectal cancer by 40%. The level of intensity, duration, frequency, and maintenance of activity over time all factor into risk reduction.

Out of all understood lifestyle factors which prevent against cancer growth in the colon or rectum, increasing your vegetable intake might be the single most important prevention strategy you can adopt. Diets high in cooked green vegetables are loaded in nutrients such as vitamin C which are often deficient in colorectal cancer patients. Vitamin C has shown to be effective at neutralizing the cancerous effects of nitrates and nitrites. Nutrients like vitamin B6, abundantly found in green vegetables, can prevent cancerous activity of the p53 gene.

Cruciferous vegetables such as cauliflower and broccoli (including their sprouts) are excellent sources of the chemoprotective compound isothiocyanate. This compound prevents abnormal tissue growth in both the colon and rectum and may also protect our cancer fighting genes.

Is the old adage true that an apple a day will keep the doctor away? It may not be the single most powerful fruit but it does have chemoprotective properties against colorectal cancer. The only catch is that the whole fruit needs to be consumed to reap all of its protection.

Apples are a great source of dietary fiber, vitamins, and minerals, as well as phytochemicals like carotenoids, which provide pigmentation. The antioxidant profile of apples packs a weighty punch at combating free radicals and cellular damage. Its nutrients are also known to enhance other antioxidant powerhouses such as the enzyme glutathione S-transferase.

But, studies have shown that the chemopreventive mechanisms of apples are dependent on their various components. In other words, drinking apple cider or juice will not give you all the protective benefits you would receive if you were to eat the whole fruit (including the peel). Next time you reach for an unhealthy processed snack, recall that 75% of colorectal cancer cases are caused by diet − choose an organic apple instead. 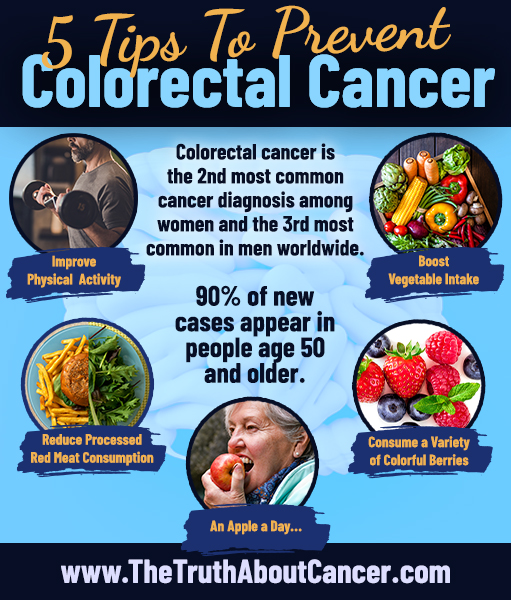 You may have known berries are a rich source of antioxidants, but did you also know that the antioxidant concentration of berries is not easily disturbed by the digestive process and is highly available to the intestines? A plethora of bioavailable compounds are concentrated in berries including flavonoids, phenolic acids, tannins, vitamins, stilbenes, and other nutrient-dense compounds.

Practice safe early detection! Better ways to screen for and detect cancer earlier than ever before are available and it is time to embrace these new methods. Conventional methods of detecting polyps (that could cause cancer) can be dangerous.

Consider some of the alternative screening tests available:

Taking a good, soil-based probiotic as part of your daily routine, as well as daily exercise, is highly suggested!

The benefits of consuming berries continues on but you likely do not need further convincing to start adding these fruits along with quality vegetables to your daily diet.

Screening for the cancer generally starts at age 50 but statistics shows that only 34% of people in the United States will comply with these recommendations. This National Colorectal Cancer Month, make a change to reduce your personal risk for colorectal cancer and urge others to get screened for the disease.